Cannot drag and drop on full row of NSOutlineView

I have an NSOutlineView in which Ive implemented Drag and Drop, its values are populate via bindings.

Everything is working for the logic that I want, which is basically the ability to drop only in-between root level items, and children are not allowed to be dragged or dropped anywhere. So Im just trying to implement a re-order if you will.

My issue comes into play with where on the view my NSOutlineView is accepting drops. It appears that its only allowing me to drop on the far left side of the row. I can't seem to drop anywhere else. My rows are View based, and have an image view.

This shows it working 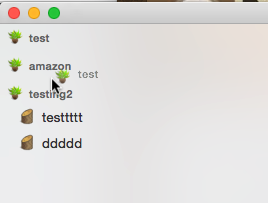 This is it not working.

Heres my code for the acceptDrop.

Is it possible this has something to do with my view setup instead of my NSOutlineView code?

It works on the very top row no matter where my cursor is, but only on the far left for all other rows.

Not the answer you're looking for? Browse other questions tagged macos cocoa drag-and-drop nsoutlineview or ask your own question.