Using msbuild with SSDT, I have tried IncludeTransactionalScripts, but it seems to only put each statement in an individual transaction. Is it possible to publish multiple database projects as a transaction? If not, can I at least make sure that each Project is published within a transaction?

For anybody else who found this question, but didn't know where to look:

At the end, if errors have been registered, the whole transaction is rolled back:

Note (as in the comments above) that this doesn't include your pre-/post-deployment scripts, so you should be careful to wrap these separately

The link below is to Peter Schott's blog - it's same guy who commented above I think - thanks :)

He explains nicely how to configure these settings when using SSMS

Using Visual Studio 2015, I found that the "Include transactional scripts" setting was not set by default. You have to select this when defining the Publish settings ([Build]>>[Publish {project name} ...]) under the [Advanced...] tab: 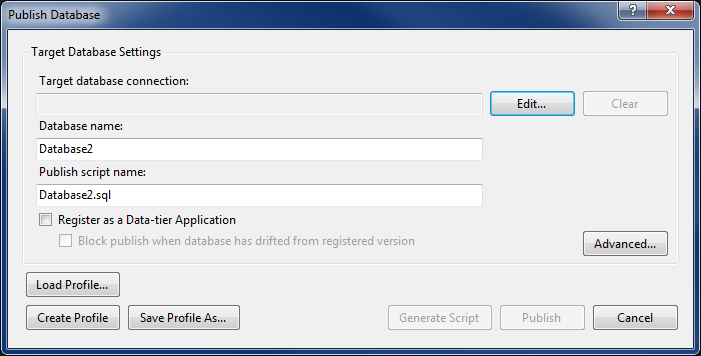 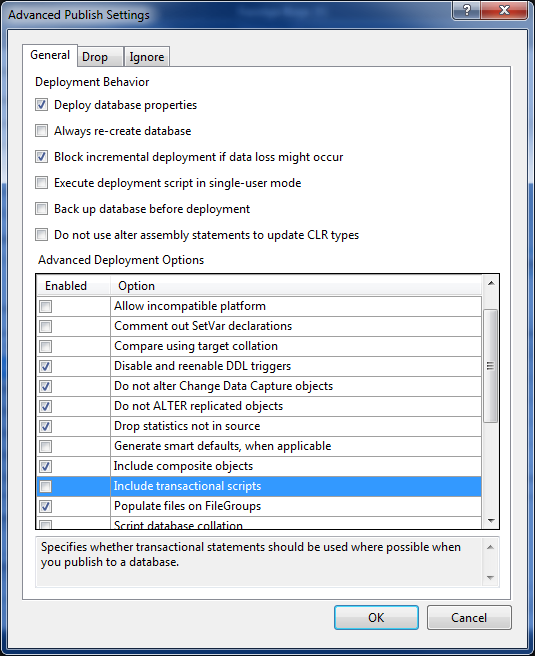 Not the answer you're looking for? Browse other questions tagged msbuild sql-server-data-tools or ask your own question.

0
Can a VS2010 Database Project create re-runnable deployment scripts?

222
How to Publish Web with msbuild?
2
How to wire up SSDT post-publish command in VS2012 for database project
0
how to install ssdt March 2014 release on windows server 2012
407
Found conflicts between different versions of the same dependent assembly that could not be resolved
3
How to Apply Transforms to SSDT publish profiles
3
SSDT Publish does not use connection string from MSBuild command line
14
MSBuild 15.0 (Visual Studio 2017) error MSB4067 for SSDT (SSRS and SSAS) projects: "The element <State> beneath element <Project> is unrecognized"
1
Stop SSDT being published when MSBuild publish run
2
SSDT Publish Attempting to Drop and Create user