We have an old ASP.NET MVC 3 Web Application, building in VS2010, that fails to compile, since last week's security update.

The problem is that the reference to System.Web.Mvc.dll is broken.

When I open the solution file on our build machine, where the security update has not run, and open the properties dialog for References->System.Web.MVC, it looks just fine.

But when I open the solution file on a dev machine where the security update has run, References->System.Web.MVC is flagged as missing. If I remove it, and try to add it back using VS2010's Add Reference dialog, it doesn't show.

Wandering around the web has led me to suggestions involving updating MVC using NuGet. We didn't use NuGet, in our VS2010 projects, so that doesn't seem quite right, for this situation. I tried it anyway, and ended up with half-a-dozen missing references.

When I look at the properties for "C:\Program Files\Microsoft ASP.NET\ASP.NET MVC 3\Assemblies\System.Web.Mvc.dll" in Windows Explorer, on the build machine I see version 3.0.0.0.

What I need is a way to change the way I build and run so that I can build and run regardless of which of these two DLLs in installed in the .NET 3.0 framework.

What I have tried that didn't work

First attempt - if the assembly is missing, add it. I deleted the old missing reference. Then I copied the DLL from the "ASP.NET MVC3\Assemblies" folder, into a folder in my project. Set it as "Copy Always", and added it as a reference.

With that, the project would compile in VS2010, but when I'd try to precompile the pages with aspnet_compiler, I got warnings:

So far, I've been able to manage to avoid understanding runtime policies, but I tried to add this, in the web.config:

Tried it again, and got the same warnings.

My question is - do I still have a problem? Or will my resolve it, despite the warnings?

Get the latest version of MVC3 via NuGet. Open your project in Dev Studio. Open the Package Manager Console tab at the bottom of Dev Studio. Then use this command:

If you click the tab key after "-Version" you will get a list of all of the available versions.

If you have an old version of NuGet you may get an error indicating you have to upgrade it. If so, open Tools->Extension Manager to install the latest version of NuGet. Note, you will need to run Dev Studio as Administrator before you can install NuGet.

Installing MVC3 should update Web.config in your project.

Where can I find System.Web.MVC dll in a system where MVC 3 is installed? 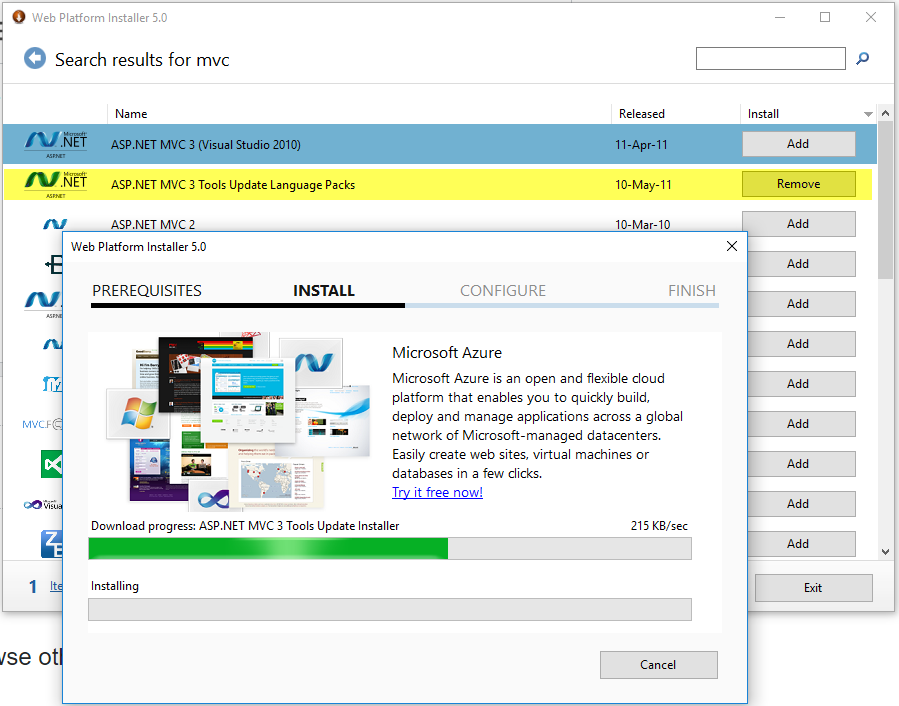 Or by using Nuget command

I have the same situation: Visual Studio 2010, no NuGet installed, and an ASP.NET application using System.Web.Mvc version 3.

What worked for me, was to set each C# project that uses System.Web.Mvc, to go to References in the Solution Explorer, and set properties on System.Web.Mvc, with Copy Local to true, and Specific Version to false - the last one caused the Version field to show the current version on that machine.

Had this problem in vs2017, I already got MVC via nuget but System.Web.Mvc didn't appear in the "Assemblies" list under "Add Reference".

The solution was to select "Extensions" under "Assemblies" in the "Add Reference" dialog.

Just in case someone is a position where he get's the same error. In my case downgrading Microsoft.AspNet.Mvc and then upgrading it again helped. I had this problem after installing Glimpse and removing it. System.Web.Mvc was references wrong somehow, cleaning the solution or rebuilding it didin't worked in my case. Just give it try if none of the above answers works for you.

In my case I had all of the proper references in my project. I found that by building the solution the nuget packages were automatically restored.

The sample mvcmusicstore.codeplex.com opened in vs2015 missed some references, one of them System.web.mvc.

The fix for this was to remove it from the references and to add a reference: choose Extentions under Assemblies, there you can find and add System.Web.Mvc.

(The other assemblies I added with the nuget packages.)

Add the reference again from ./packages/Microsoft.AspNet.Mvc.[version]/lib/net45/System.Web.Mvc.dll

Not the answer you're looking for? Browse other questions tagged c# asp.net .net asp.net-mvc or ask your own question.

2
Where to discover in which package is some namespace?
28
Where can I find System.Web.MVC dll in a system where MVC 3 is installed?
0
'System.Web.Mvc.VirtualPathProviderViewEngine' is defined in an assembly that is not referenced
-2
How build older version projects in VS2015
0
Visual Studio : The type or namespace name 'Mvc' does not exist in the namespace 'System.Web'
0
Can't find nuget package for system.web.mvc 3.0.0.1

200
Could not load file or assembly 'System.Web.Mvc'
251
Could not load file or assembly or one of its dependencies
37
aspnet_compiler finding wrong version of System.Web.WebPages 1.0.0.0 instead of 2.0.0.0
0
Error: Multiple ASP.NET MVC assemblies have been loaded into this application
159
[A]System.Web.WebPages.Razor.Configuration.HostSection cannot be cast to… web.config issue
126
Windows update caused MVC3 and MVC4 stop working
23
How to resolve? Assuming assembly reference 'System.Web.Mvc
1
Strange MVC Referencing Issue
0
Why .net framework change causes mvc version conflict