adapt blockquote to the image height and add stylized quote

I want to modify my html/css to obtain something like these modification in red, adding two stylized quote, and adapt image to the size of my <blockquote></blockquote> element.

You can see fiddle here : http://jsfiddle.net/h6m80gqb/

As you tagged this HTML5 and even awarded a bounty on it I decided to have a play with this myself, despite my solution ending up with the same weakness as Clint Brown's answer has, but at least I am not using tables in my css and my quotes are a bit more stylized :P .

Is what I ended up with, if you need to include the image url in the generated HTML (as you likely will), you will need to put a separate tag for that as well.

Getting the image to adapt to the size of the box

As you were talking about stylized quotes I believe you wanted more than just inserting the relevant character, so instead you can float the first quote with a big font size and inline the second to give the following final look 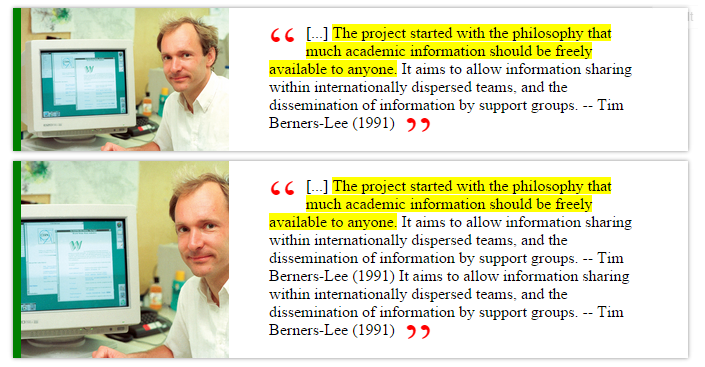 Playing around with fonts and stuff could still greatly enhance the look of everything, but this does bring the point across.

The 'flaw' in this answer

Trickier than I first thought using only CSS. This is the approach I tried but it's not quite there yet -

I would move the <img> tag into the <blockquote> tag and remove the style='' attribute.

To get special " marks, you could have the quotes in a <span> tag and style them appropriately.

2192
Make a div fill the height of the remaining screen space
1251
What is the difference between visibility:hidden and display:none?
880
Stretch and scale a CSS image in the background - with CSS only
2313
How to make a div 100% height of the browser window
1303
How do I combine a background-image and CSS3 gradient on the same element?
2166
Get the size of the screen, current web page and browser window
2112
What's the difference between SCSS and Sass?
932
Make body have 100% of the browser height
1041
How can I make Bootstrap columns all the same height?
2
How can I schedule enable/disable an element in html using javascript?