I have a UIWebView included in a UIViewController which is a descendant of UINavigationController. It looks like this: 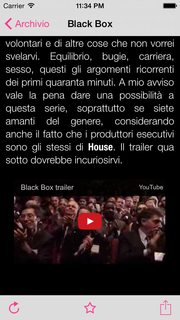 The app is portrait only. When I play the video I want the user to be able to rotate the device and see the video in landscape mode. I use this code to allow it:

And then in my UINavigationController (so when the video finishes the view is not presented in landscape but only in portrait): 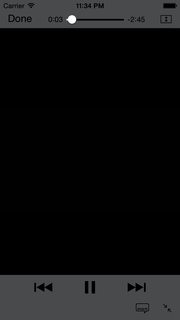 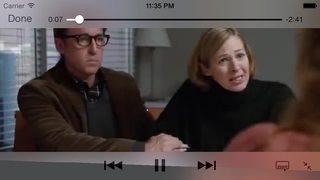 But then the video is done playing (or the user taps ‘Done’) and the screens return to the underlying view, this is what happens:

As you can see, the navigation bar slips under the status bar. Additionally, I get a lot of auto-layout errors in the logs: http://pastebin.com/09xHzmgJ

Any idea about how to solve this?

I temporarily solved (through a hack) with the following code in the viewDidLoad of my controller. I have to specify that the code is specifically made for my case: since I explicitly disallow landscape orientation of my UINavigationController (see code above), the usual notification “UIDeviceOrientationDidChange” is not called when the playback finished and the window goes back to portrait. However, I hope there is a better option and this is a bug of the SDK, since it does not appear on iOS 7 and given the amount of auto-layout errors I get related to the video player (on which I have no control).

I encountered exactly the same issue and used the same code as @entropid did. However the accepted solution did not work for me.

It took me hours to come up with the following one-line fix that made things working for me:

I faced this problem yesterday, where @entropid answer worked for iOS 9 and below, but for iOS 10 it didn't (since iOS 10 did actually hide the status bar, where on iOS 9 and below it was just the UINavigationBar that changed its frame without hiding the status bar and, thus, it overlapped that bar).

So I solved it using a solution like the one @StanislavPankevich suggested, but I subscribed to notifications when a UIWindow has become hidden (which can be in several cases, like when a video has finished, but also when a UIActivityViewController dismisses and other cases) instead of viewWillLayoutSubviews. For my particular case (a subclass of UINavigationController), methods like viewDidAppear, viewWillAppear, etc. simply weren't being called.

It's very simple, as it says @Stanislav Pankevich, but in

I was having the same issue and using @entropid solution I was able to fix the navigation bar problem. But my view remains below the nav bar which I fix using "sizeToFit".

On iOS 11 accepted solution didn't work for me. Seems that navigation bar stops reflecting for frame changes. But there is a workaround. At first, we need to modify supportedInterfaceOrientationsForWindow method to return UIInterfaceOrientationMaskLandscape for video controllers instead of UIInterfaceOrientationMaskAllButUpsideDown. In my case when I tap on embedded YouTube video, system always opens AVFullScreenViewController, so I removed other checks from original example. Code:

This didn't changes behaviour of AVFullScreenViewController on iOS 10 and less, but fixes navigation bar on iOS 11, so there is no need to update frame (also there is a side-effect on iOS 11 that video rotates from landscape when starts playing, but it's a tradeoff). Next, we need to add check in UIWindowDidBecomeHiddenNotification method:

Without setNeedsStatusBarAppearanceUpdate text in status bar will not appear on iPhone X, for other devices it's not needed.

My answer on this question works great. Here It will play the video inside your WebView normally but if you tilt your phone it will play in Landscape!

Also important to note is if you include youtube.com as the Base URL it will load much quicker.

Make a UIWebView in your storyboard and connect the @property to it, then reference below.

10
iOS 8 youtube video embed
0
Playing video in Landscape and portrait
1
How to allow rotation of youtube fullscreen or AVFullscreenVideoController?
1
Allow landscape when UIWebView is playing video

0
iOS6 Orientation with NavigationController
0
Forcing UINavigationController in portrait mode only
0
when navigating through tab bar elements, navigation controller is not called
14
iOS 7+ Dismiss Modal View Controller and Force Portrait Orientation
24
Why in iOS 8 my app at launch take wrong orientation?
0
How to rotate forcefully in my SDK VideoViewController to landscape orientation when app supports only portrait orientation in iOS Swift
1
- (NSUInteger)supportedInterfaceOrientations is not getting called through a custom framework in project