Maven: Lifecycle vs. Phase vs. Plugin vs. Goal [closed]

Ask Question
Asked 6 years, 6 months ago
Active 4 months ago
Viewed 52k times
110
Closed. This question needs to be more focused. It is not currently accepting answers.

Relatively new developer here, even though I've been using it for a little while, I'm hoping to solidify my Maven fundamentals. Part of my problem is that I have no experience with Ant, which seems to be from where many explanations stem. I've been reading and watching tutorials, and I keep hearing the same terms:

From what I've learned, it seems that lifecycle is the broadest of the bunch, and is composed of (or completed by) phases, plugins, and/or goals.

Question: Could you provide any info on how these terms are related and the most common examples?

The more explicit and basic, the better!

A Maven lifecycle is an (abstract) concept that covers all steps (or better: all the steps the Maven designers decided to support) that are expected to occur in a project's development lifetime. These steps (or stages) are called phases in Maven terminology.

A Maven plugin is a container for/supplier of goals. Code implemented in goals is the real workhorse. (Maven in its core itself is just managing plugins and executing goals). Each of a plugin's goals can be assigned/bound to any of the lifecycle phases.

When invoking mvn <phase> Maven passes all phases (every time) and executes all goals (supplied by plugins) that have been bound to any of the phases prior and up to (and including) the given phase. If there is a phase with no goal bound to it nothing is done. But the phase is passed nevertheless.

I.e. you can't "'insert' additional phases" into one of Maven's built-in lifecycles. They are already there, always! You could develop your own lifecycle with its own phases but that's far beyond simply using Maven as it is.

Goals can also be executed directly, which you get told when running mvn without any phase or (plugin:)goal [with line breaks and shortened for readability here]:

... see actual output or Maven, Introduction to the Build Lifecycle at References below.

If you ever wondered how Maven knows what to do without any goal binding in the POM there's a link to default-bindings.xml at the bottom of that page which is located in <Your Maven installation>/lib/maven-core-x.y.z.jar/META-INF/plexus/default-bindings.xml.

The phases for the built-in lifecycles (clean, default, site) are declared in <Your Maven installation>/lib/maven-core-x.y.z.jar/META-INF/plexus/components.xml under .../<component>/<role>org.apache.maven.lifecycle.Lifecycle.

Maven: Lifecycle vs. Phase vs. Plugin vs. Goal

Answering late just to clarify yet another level of granularity missing in this thread: executions (of a goal), which are the smallest units of a Maven build.

Hence, we have build cycles (basically, set of actions for a specific overall goal), which consist of phases (lower granularity, a cycle step), which can invoke a set of configured goals provided by certain plugins. That is, Maven is (also) a plugin executor, each plugin can offer one or more goals. You then (also) decide which goal is attached to which phase, most of the times in the defaul life cycle (without any, that is, the default). But you can actually have yet another level: executions (of the same goal, from the same plugin, or of different goals from different plugins)

A picture I prepared to resume the whole 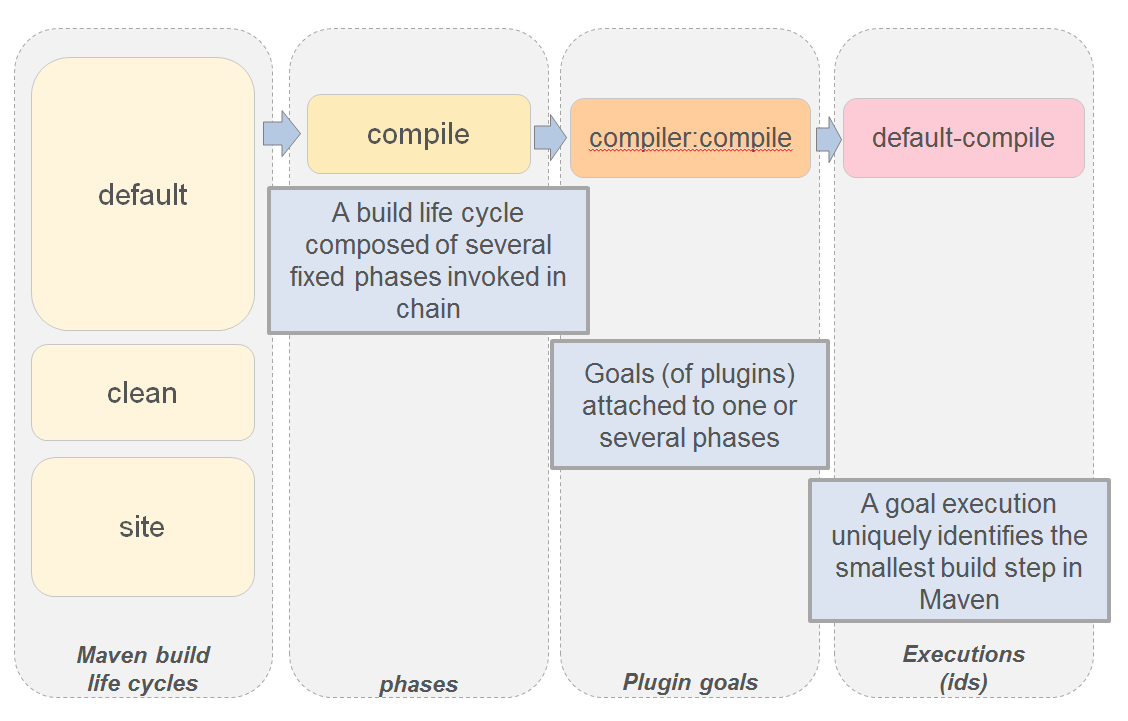 And indeed this is how Maven shows it (its smallest unit of work) via the unique string in its build log:

For example, we would have:

Which indeed means (through different levels of granularity):

Default executions are provided out-of-the-box via Maven packaging bindings, that is, by default (and enforcing convention over configuration) Maven already invokes certain goals (of standard plugins) during certain phases. The executions ids of these default invocations are defined according to certain conventions.

This also explains why if you really want to override a default behavior (binding) of a Maven build, you need to specify (override) exactly the same execution id in your POM for the same plugin. You could, for instance, skip compilation simply defining an execution of the maven-compiler-plugin with the same default-compile id but bound to a non existing phase (or an empty one).

To make it short: an execution tells Maven which goal(s) to execute with which configuration within which phase.

Some executions are provided by default (defaul bindings), which explains why the maven minimal pom of just 6 lines can already do a lot (compile, test, package, etc.): executing goals of standard plugins in certain phases: it's convention over configuration. Then, via the pom.xml configuration you can add stuff (executions) to the build or influence the behavior of already configured plugins (in this case no executions section, but just configuration would be enough).

Yes, you could skip build cycles (and their phases) and directly invoke goals (of plugins). Imagine the following:

(NOTE: you could also invoke inline in only one call)

Here we are compiling app code, test code, execute tests and package: imagine how manual, error-prone, repetitive and time-consuming this would be. Convention over configuration helps us: Maven introduces build life cycles and phases. The default life cycle (with no name, that is, the default), provides a range of phases based on best practices and conventions (the mantra of Maven).
If you want to achieve the same as above, simply run: mvn package and it will automatically compile, test and package your project. How? invoking plugins. That is, phases are meaningful and configurable set of plugins (goals) executions. To make it even more standard, for each phase Maven will firstly invoke any preceeding phase, so that e.g. if you want to test you'll be sure you firstly compile.

p.s. note that when specifying several goals for the same execution, you will still see clearly in the build log two different executions (with the same id) for the two different goals (hence, still unique tuple).

Credit to Sandeep Jindal and Premraj (from here What are Maven goals and phases and what is their difference?). Their explanation help me to understand.

I created some full code examples & some simple explanations here https://www.surasint.com/maven-life-cycle-phase-and-goal-easy-explained/ . I think it may help others to understand and can try something directly.

Life Cycle is a collection of phase in sequence, see here Life Cycle References. When you call a phase, it will also call all phases before it.

This means "call the clean goal, in the clean plugin" (Nothing relates to the clean phase here. Don't let the word"clean" confusing you, they are not the same! See full explanation in my link above)

And belatedly another diagram 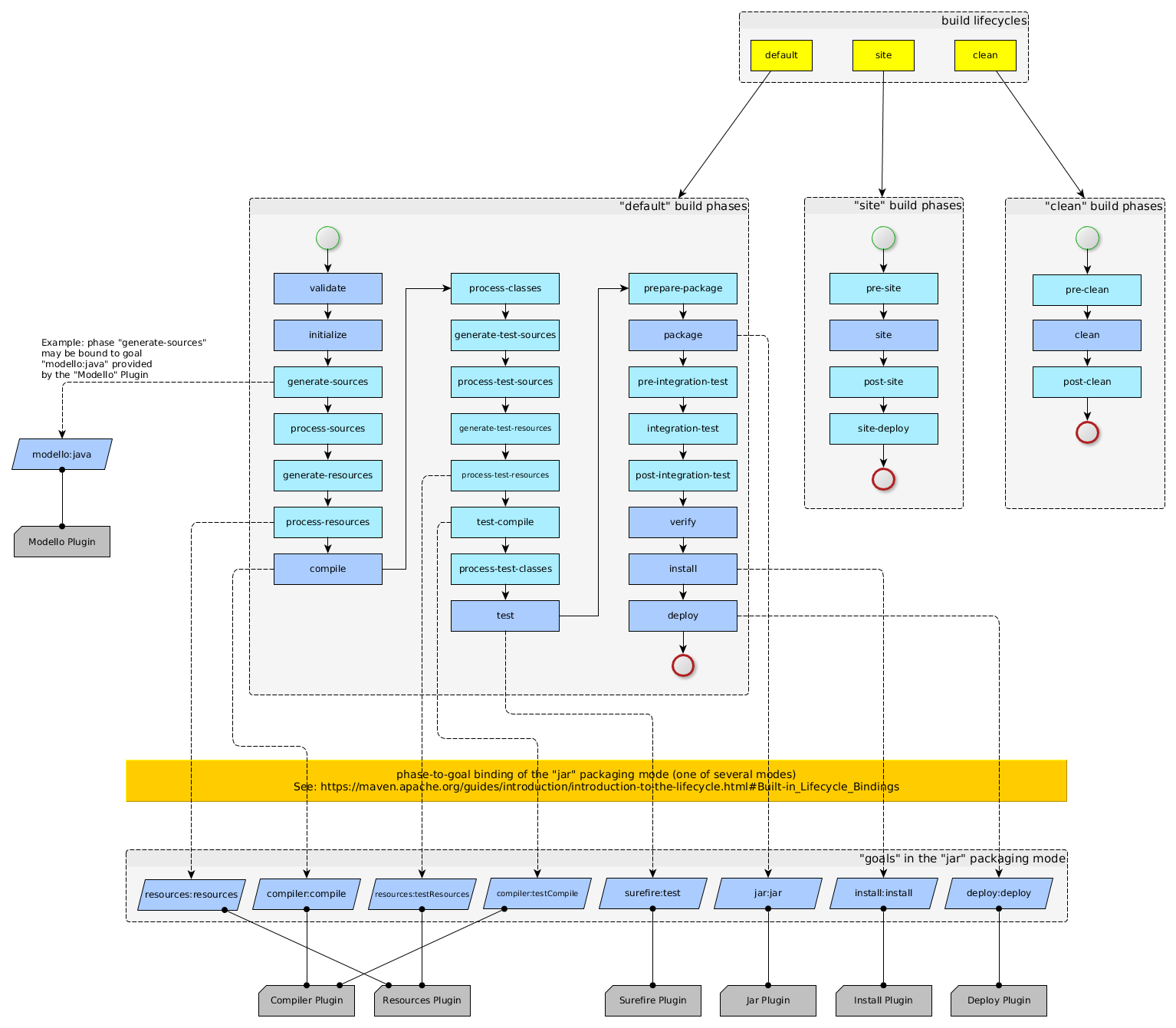 Source this is really good tutorial

Lifecycles, Lifecycle Phases, Plugins and Plugin Goals are the core of Maven.

When we run "mvn package" in a Java Project, Maven binds plugin goals to lifecycle phases as shown in the next figure. 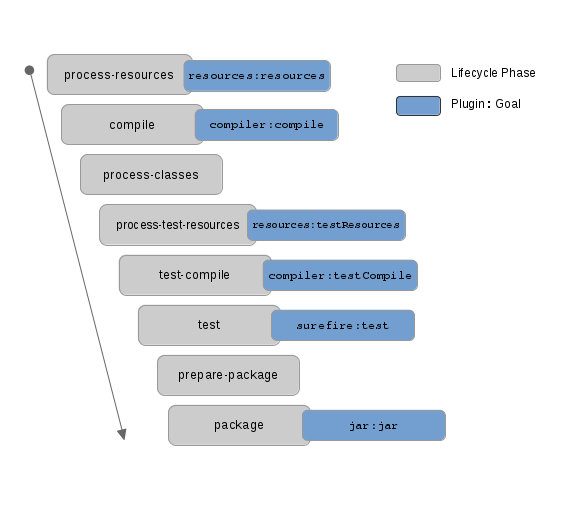 So to explain a little further as outlined here

Maven builds are split in life-cycles these are:

Phases have goals to run prior pre- or after post- a phase, for instance:

You can view goals as additional "inserted" phases if you like. Read up here or take a look at @Gerolds answer for details.

LifeCycle vs Phases: Life Cycle is a collection of phases. When you call a phase, it will also call all phases that come before it. Maven comes with 3 built-in build life cycles as:

Clean lifecycle has 3 phases: pre-clean, clean and post-clean. Default and site lifecycles' phases are same as shown in the picture.

Not the answer you're looking for? Browse other questions tagged maven maven-3 pom.xml maven-lifecycle or ask your own question.

345
What are Maven goals and phases and what is their difference?
228
How is “mvn clean install” different from “mvn install”?
16
Maven: Relationship between Lifecycle Phase & Goal
11
What is the implicit ID of a maven plugin execution?
6
Keeping the maven deploy plugin from deploying on test failures
9
Can I resume a Maven lifecycle from an arbritrary phase?
2
mvn test vs mvn surefire:test
2
Maven plugin default phase
2
Manage multiple dependencies between microservices using Maven
2
Include unzipped resource in JAR - Maven
See more linked questions

573
Run a single test method with maven
871
Differences between dependencyManagement and dependencies in Maven
106
Run a single Maven plugin execution?
797
How to force maven update?
1316
How to add local jar files to a Maven project?
952
How to solve “Plugin execution not covered by lifecycle configuration” for Spring Data Maven Builds
16
Maven: Relationship between Lifecycle Phase & Goal
590
Maven Install on Mac OS X
4
Issue with the lifecyle of Hibernate3 Maven plugin
345
What are Maven goals and phases and what is their difference?