The Android emulator is a bit sluggish. For some devices, like the Motorola Droid and the Nexus One, the app runs faster in the actual device than the emulator. This is a problem when testing games and visual effects.

How do you make the emulator run as fast as possible? I've been toying with its parameters but haven't found a configuration that shows a noticeable improvement yet. 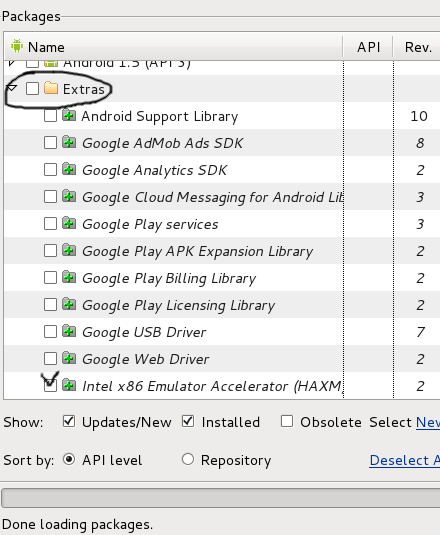 Also don't forget install this one 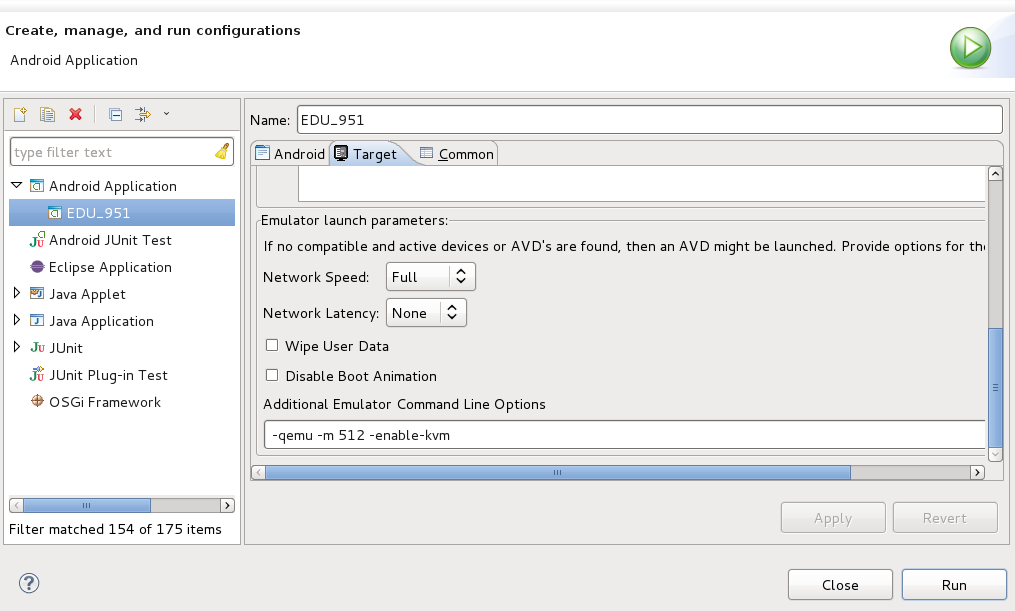 P.S. For Fedora, for Ubuntu

UPDATE: Now that an Intel x86 image is available, the best answer is by zest above.

As CommonsWare has correctly pointed out, the emulator is slow because it emulates an ARM CPU, which requires translation to Intel opcodes. This virtualization chews up CPU.

To make the emulator faster, you have to give it more CPU. Start with a fast CPU or upgrade if you can.

Then, give the emulator more of the CPU you have:

I'm seeing somewhere around a 50% improvement with these two changes in place.

To set processor affinity on Windows 7:

Note: When you change affinity in this way, it's only changed for the lifetime of the process. Next start, you have to do it again. 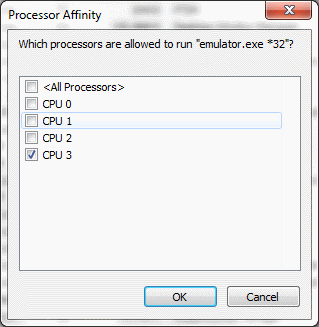 I would like to suggest giving Genymotion a spin. It runs in Oracle's VirtualBox, and will legitimately hit 60 fps on a moderate system.

Here's a screencap from one of my workshops, running on a low-end 2012 model MacBook Air: 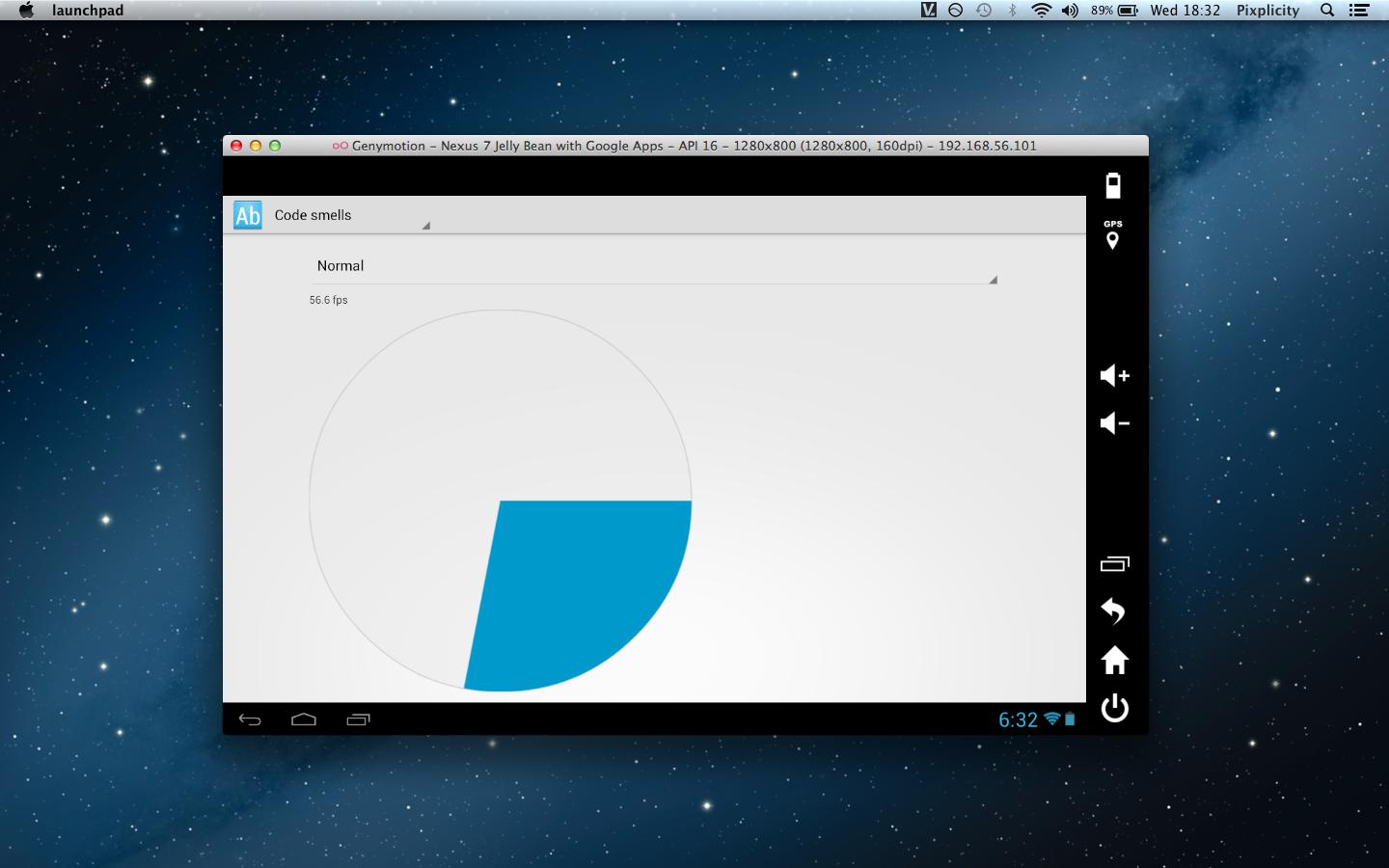 If you can't read the text, it's a Nexus 7 emulator running at 56.6 fps. The additional (big!) bonus is that Google Play and Google Play Services come packaged with the virtual machines.

(The source of the demoed animation can be found here.)

Enable GPU Hardware Acceleration (in addition to Intel's HAXM), if you are using API 15 v3 or newer and SDK Tools v17+. Graphics acceleration for the emulator takes advantage of your development computer's graphics hardware, specifically its graphics processing unit (GPU), to make screen drawing faster. This gives a noticeable boost in speed.

To enable graphics acceleration enabled by default on your emulator: when creating the AVD, in the Hardware section, click New, select GPU emulation and set the value to Yes.

To enable acceleration only at runtime: use the -gpu flag while starting the emulator like this:

With ADT rev 17 the emulator supports running x86 system images in virtualization mode on Windows and Mac OS X. This has a noticeable impact on performance.

Just wanted to say that after I installed the Intel HAXM accelerator and use the Intel Atom image the emulator seems to run 50 times faster. The difference is amazing, check it out!

I noticed that the emulator defaults to only Core 0, where most Windows applications will default to "any" core. Also, if you put it on another core (like the last core), it may make the emulator go crazy. If you can, you can try putting your heavy-CPU usage applications on the other CPU cores for a boost in speed.

Hardware-wise, get the fastest CPU you can get that works for single-core applications. More than 2 cores might not experience a huge difference in terms of emulator performance.

Eclipse + the Android emulator together eat up a ton of RAM. I would recommend 3 gigs of RAM at least because I used a system with 2 gigs of RAM, and it slowed down because the system ran out of RAM and started to use the page file.

I feel that the best CPUs for it will probably have a high clock (only use clock as a measure for CPUs in the same series btw), handle non-SIMD operations well, and have a turbo boost mechanism. There aren't many Java-based benchmarks, but overall look for application benchmarks like compression and office. Don't look at gaming or media since those are affected greatly by SIMD. If you find a Java one, even better.

On this year google I/O (2011), Google demonstrated a faster emulator. The problem is not so much on the byte code between ARM and x86 but the software rendering performed by QEMU. They bypass the rendering of QEMU and send the rendering directly to an X server I believe. They showed a car game with really good performace and fps.

I wonder when that will be available for developers...

Google recently announced a new emulator for Android. It's a much faster and better than the old one. You can find more info about it here.

choose a low resolution emulator (eg: Nexus S) if you don't have a good graphic card (like me)

I think it is because clr virtual machine uses cpu directly without code opcode translation. It may be optimization for clr application or may be windows mobile/window phone 7 started on INTEL proccessor. Android platform based on linux and theoretically you can start android on virtual machine in i686 environment. In this case virtual machines such as vmware could execute some opcodes direcly. But this option will be allowed only if you write on the Java. Because the Java interpret their byte-code or precompile it before execution. see: http://www.taranfx.com/how-to-run-google-android-in-virtualbox-vmware-on-netbooks

Thank you @zest! Worked like a charm. Some things of note: Need to apply Intel's hotfix for the HAXM to deal with kernel panic issue: http://software.intel.com/en-us/android/articles/intel-hardware-accelerated-execution-manager Also, note, if you have more than one abi, you need to uninstall one due to a bug in the latest version of the Android API (r19): https://code.google.com/p/android/issues/detail?id=66740 (remove armeabi-v7a in this case, since you want the x86 abi). Other than the 45-minutes it took me to resolve these, it was an very rewarding exercise in terms of the increased performance of the emulator.

You could also try the Visual Studio Android Emulator, which can also be installed as a standalone emulator (you don't need Visual Studio). Please note, that it can be installed only on Windows Pro or higher systems.

Use Genymotion instead of emulator. Genymotion has better performance https://www.genymotion.com

Enabling this option worked for me. 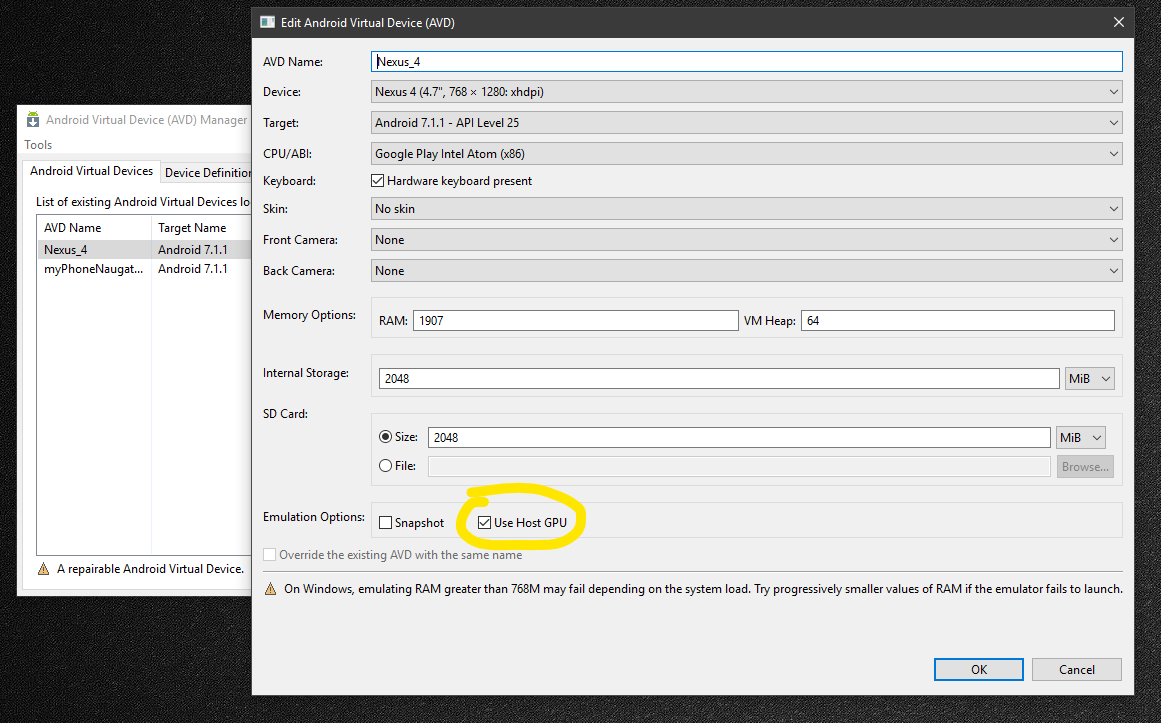 I've been using the Intel(86) CPU/ABI. I created another emulator using the ARM(armeabi-v7a) and i found quite an improvement with the speed. I'm using platform 4.1.2 API level 16

Goto to your BIOS settings. Enable your Virtualization technology in your settings..

It solved my problem...

Android Studio 2.0 emulator runs ~3x faster than Android’s previous emulator, and with ADB enhancements you can now push apps and data 10x faster to the emulator than to a physical device. Like a physical device, the official Android emulator also includes Google Play Services built-in, so you can test out more API functionality. Finally, the new emulator has rich new features to manage calls, battery, network, GPS, and more.

Not the answer you're looking for? Browse other questions tagged android performance testing android-emulator emulation or ask your own question.

4156
How do you close/hide the Android soft keyboard programmatically?
3182
Improve INSERT-per-second performance of SQLite
3302
What is the difference between call and apply?
6168
What is the difference between "px", "dip", "dp" and "sp"?
2365
Why are elementwise additions much faster in separate loops than in a combined loop?
26167
Why is processing a sorted array faster than processing an unsorted array?
1700
Is < faster than <=?
3861
Proper use cases for Android UserManager.isUserAGoat()?