How is clang able to steer C/C++ code optimization?

But I just cannot understand how llvm is involved.

It seems that compiling source code doesn't even need a static library such as libLLVMCore.a, instead for debian clang packages depends on another package called libllvm-3.4(clang version is 3.4), which contains libLLVM-3.4.so(.1), does clang use this shared library for optimization?

I've checked clang source code for a while and found that include/clang/Driver/Options.td contains the related options, but unfortunately I failed to find the source files that include that file, so I'm still not aware of the mechanism.

(TL;DontWannaRead - skip to the end of this answer)

To answer your question properly you first need to understand the difference between a compiler's front-end and back-end (especially the first one).

Clang's duty is the following:

i.e. translating from C++ source code (or C, or Objective C, etc..) to LLVM IR, a textual lower-level representation of what should that code do. In order to do this Clang employs a number of sub-modules whose descriptions you could find in any decent compiler construction book: lexer, parser + a semantic analyzer (Sema), etc..

LLVM is a set of libraries whose primary task is the following: suppose we have the LLVM IR representation of the following C++ function

the core of the LLVM passes should optimize LLVM IR code: 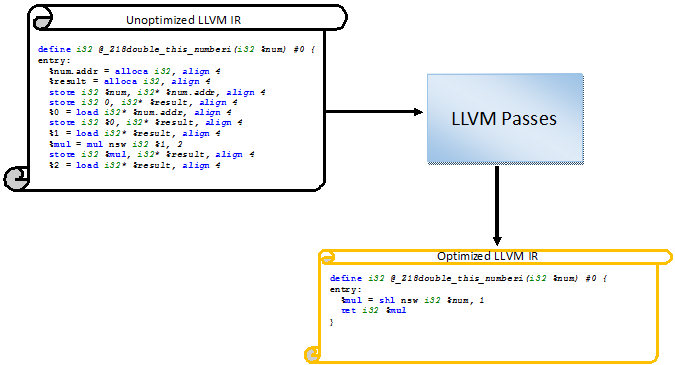 The term "back-end" is often confusing since there are many papers that would define the LLVM libraries a "middle end" in a compiler chain and define the "back end" as the final module which does the code generation (LLVM IR to executable code or something else which no longer needs processing by the compiler). Other sources refer to LLVM as a back end to Clang. Either way, their role is clear and they offer a powerful mechanism: whatever the language you're targeting (C++, C, Objective C, Python, etc..) if you have a front-end which translates it to LLVM IR, you can use the same set of LLVM libraries to optimize it and, as long as you have a back-end for your target architecture, you can generate optimized executable code.

Recalling that LLVM is a set of libraries (not just optimization passes but also data structures, utility modules, diagnostic modules, etc..), Clang also leverages many LLVM libraries during its front-ending process. You can't really tear every LLVM module away from Clang since the latter is built on the former set.

As for the reason why Clang is said to be a "compilation driver": Clang manages interpreting the command line parameters (descriptions and many declarations are TableGen'd and they might require a bit more than a simple grep to swim through the sources), decides which Jobs and phases are to be executed, set up the CodeGenOptions according to the desired/possible optimization and transformation levels and invokes the appropriate modules (clangCodeGen in BackendUtil.cpp is the one that populates a module pass manager with the optimizations to apply) and tools (e.g. the Windows ld linker). It steers the compilation process from the very beginning to the end.

Finally I would suggest reading Clang and LLVM documentation, they're pretty explicative and most of your questions should look for an answer there in the first place.

It's not exactly like GCC, so don't spend too much time trying to match the two precisely.

The LLVM compiler is a compiler for one specific language, LLVM. What Clang does is compile C++ code to LLVM, without optimizations. Clang can then invoke the LLVM compiler to compile that LLVM code to optimized assembly.

Not the answer you're looking for? Browse other questions tagged c++ gcc compilation clang llvm or ask your own question.

1769
How can I profile C++ code running on Linux?
27
Are llvm-gcc and clang binary compatible with gcc? - particularly mingw gcc on Windows
1853
C++11 introduced a standardized memory model. What does it mean? And how is it going to affect C++ programming?
439
Why does GCC generate 15-20% faster code if I optimize for size instead of speed?
6
Code coverage in clang
20
Enable OpenMP support in clang in Mac OS X (sierra & Mojave)
1
LLVM / Clang 8 Compilation of OpenMP Code in Windows