I have a question regarding the Java Memory Model. Given the following example:

So are synchronizes-with edges "bidirectional barriers" for the compiler's re-ordering actions?

EDIT 1 I am concerned about this because if synchronizes-with edges were not bidirectional re-ordering barriers, the compiler could simply create a deadlock by moving lock acquires into others.

Or are bidirectional re-ordering barriers not even necessary to prevent this because lock acquires can't be pushed into others because that would change the synchronization order?

EDIT 3 Here's an example that shows how reordering might cause a deadlock:

x and y are shared variables and syncA and syncB may be acquired by any other thread. But with the following code, there is no deadlock possible.

If, however, the acquire of syncA is reordered into the syncB block this might cause a deadlock:

I think this is not a legal compiler transformation, because it would change the synchronization order. Am I right with this assumption? What part of the Java Memory Model (JMM) allows/disallows this?

Thanks to assylias for linking to this question which contains an answer with this image from the JSR-133 Cookbook: 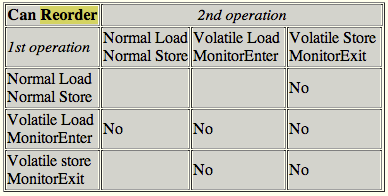 According to this image the compiler transformation from EDIT 3 is illegal, because it reorders two MonitorEnters.

Also, this table shows which synchronization-edges are what kinds of "reordering-barriers" for which other operations.

Thank you for your help :)

Not the answer you're looking for? Browse other questions tagged java multithreading compiler-optimization memory-model java-memory-model or ask your own question.

1
Can the synchronized statements be re-ordered by Java compiler for optimization?

45
Memory effects of synchronization in Java
11
What is the scope of memory flushed or published to various threads when using volatile and synchronized?
0
Can a thread acquire a lock on a instance of a class,when other thread is executing a static synchronized method of this class?
63
How do “acquire” and “consume” memory orders differ, and when is “consume” preferable?
38
Java memory model: volatile variables and happens-before
2
Synchronize fresh reads and memory barrier
4
What does “synchronization actions are totally ordered” mean?
21
What are memory fences used for in Java?