I'm using Windows and Virtualbox with RedHat, putting it simple: I've created a shared folder so I can use Eclipse on my Windows OS and do some testing in Linux.

However, I can't access the shared folder with my user, I've logged in with root and used chmod 777 and even moved my user to the folder's group.

Whatever I do the result is the same:

What can I do? How can I access the shared folder with my user?

Add yourself to the vboxsf group within the guest VM.

To take effect you should log out and then log in, or you may need to reboot.

Edit the file /etc/group (you will need root privileges). Look for the line vboxsf:x:999 and add at the end :yourusername -- use this solution if you don't have sudo.

To take effect you should log out and then log in, or you may need to reboot.

Try this (on the guest machine. i.e. the OS running in the Virtual box):

Now reboot the OS running in the virtual box.

For the truly lazy (no typing, only totally easy copy and paste):

Log out and back in to make the change active.

I know it's a "me too" solution, but I am truly lazy and didn't find any other solution to appeal my innate apathy... :)

Start up your RHEL Guest VM and open up a Terminal. Make sure you have the Developer Tools installed.

And the Kernel headers package so that the Guest Additions script can update your kernel.

Once you have the prereqs in place its time to install the Guest Additions. With your running VM selected go to the VirtualBox menu and select Devices --> Insert Guest Additions CD image...

Allow a few seconds for the mount to occur and the install script to kick off. Once they have click the "Run" button in the dialog that popped up in your Guest VM.

After the script finishes right click the CD Icon on the Desktop and choose Eject. Then Shutdown the Guest VM.

Create the Shared folder in you Host system using Terminal, I usually put it in my Documents folder, and make sure that your user can access it.

In the Oracle VM Virtual Box Manager select your VM and then click on the "Shared folders" configuration element. In the next dialog click on the Add Folder icon to the right of the Folders List.

Then in the popup window select the Host Folder you just created as the Folder Path and give it a Folder Name that will be used by the Guest VM, also tick the "Auto Mount" check-box. 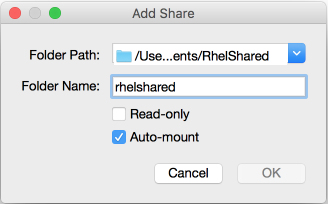 After rebooting the Guest VM launch a terminal on the Host and check the user that is associated with the running VirtualBox Guest process is either your user, very likely, or in a group with access to the Shared folder.

Then as per several of the previous answers in a Terminal on the Guest VM add your user to the vboxsf group.

Log out and in again to pickup the change.

The shared folder should now be available and accessible as sf_rhelshared assuming you used the same names as I did in the popup window above.

The VBoxManage command is:

In my case the following was necessary:

The issue is that the shared folder's permissions are set to not allow symbolic links by default. You can enable them in a few easy steps.

After adding the user to the vboxsf group, you might need to completely log out of the gnome/xfce/??? session, because someone long ago decided that group affiliation should be cached at first login to the window system.

In my personal experience, it's difficult to enable shared folders in VirtualBox but it Is posible. I have a debian Buster guest virtual machine installed in my Windows 10 host.

I don't recognize exactly what did it, but I remember I went to Windows defender, my antivirus to see if they recognize VirtualBox as a program and not as a virus. After that, I press right click on the document file and allowed to share the folder and I gave click to some buttons there and accepted to share with groups and with muy user in Windows 10.

Also, I found a webpage of Windows about something like virtual machines that I don't remember well, but it took me to a panel and I had to change three things double clicking so when I update Windows, it recognizes my virtual machine. Also, in muy debian, in the terminal, using some command lines, muy VirtualBox recognized my user giving permissions, I based on some info in the Ubuntu forums. I put all what I remember.

Not the answer you're looking for? Browse other questions tagged virtualbox shared-directory or ask your own question.