How do API Keys and Secret Keys work? Would it be secure if I have to pass my API and secret keys to another application?

I am just starting to think about how api keys and secret keys work. Just 2 days ago I signed up for Amazon S3 and installed the S3Fox Plugin. They asked me for both my Access Key and Secret Access Key, both of which require me to login to access.

So I'm wondering, if they're asking me for my secret key, they must be storing it somewhere right? Isn't that basically the same thing as asking me for my credit card numbers or password and storing that in their own database?

How are secret keys and api keys supposed to work? How secret do they need to be? Are these applications that use the secret keys storing it somehow?

That's an example of a two-way function and its inverse. Theoretically, any mathematical functions that maps one thing to another can be reversed. In practice, though, you can make a function that scrambles its input so well that it's incredibly difficult to reverse.

Taking an input and applying a one-way function is called "hashing" the input, and what Amazon stores on their system is a "hash" of your secret key. SHA1 is an example of this kind of "one-way" function, it's also hardened against attacks.

The HMAC function builds on established hash functions to use a known key to authenticate a string of text. It works like this:

The difference between this and PKI is that this method is RESTful, allowing a minimum number of exchanges between your system and Amazon's servers.

Isn't that basically the same thing as asking me for my credit card numbers or password and storing that in their own database?

Yes, though the damage someone can do with S3 seems to be limited to draining your account.

How secret do they need to be? Are these applications that use the secret keys storing it somehow?

At some point, you're going to have to load the secret key, and with most Unix based systems, if an attacker can get root access they can get the key. If you encrypt the key, you have to have code to decrypt it, and at some point the decryption code has to be plain text so it can be executed. This is the same problem DRM has, except that you own the computer.

In many cases, I just put secret keys in a file with limited permissions, and take the usual precautions to prevent my system from being rooted. There are a few tricks to make it work properly with a multiuser system, such as avoiding temporary files and such.

Public Key Cryptography is used to defend against very specific attacks, some of which are common. In short this is complex math that allows one to verify that at individual has both the Public and Private Key pair while only knowing the public key. This is very different from a credit card or static password. As an example if you are authenticating with an OpenSSH server then the server doesn't need the private key.

Ideally if Amazon's API database where to be compromised the attacker would have a list of public keys and would be unable to access the user's API using this information. However ideal systems are not always put into practice and i don't know for sure if Amazon is protecting against this attack vector, but they should be.

In public key authentication is statistically immune to brute force. Passwords are often dictionary words which can be broken relativity fast. However a private key is a massive number that isn't easy to guess. If the attacker had the public key then they could perform many guesses "offline" on a super computer, but even then it would take a lot of time and money to break the key.

AWS has designed their own custom authentication algorithm. v4 was released in 2014. Details are outlined here: Authenticating Requests (AWS Signature Version 4) . A major point is that the request is not signed with the secret itself, but with a signing key which is generated using the secret. It also uses HMAC-SHA256 for signing. 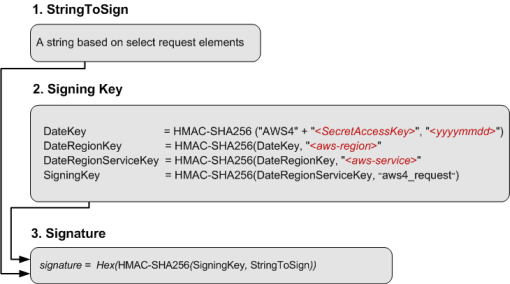 Using asymmetric keys would be safer since AWS would only store a public key instead of the secret, which is stored by both the user and AWS.

Not the answer you're looking for? Browse other questions tagged security

157
passport.js RESTful auth
103
Why use an API key and secret?
9
Mobile-to-Server API Security

38
How would you keep secret data secret in an iPhone application?
1343
How should I ethically approach user password storage for later plaintext retrieval?
1
How to keep secret keys a secret from sys admin?
30
Making a Git project open source when you have secret keys
814
How to avoid reverse engineering of an APK file
110
What's the best approach for generating a new API key?
86
How do I securely use Google API Keys
6
How services generate and use public and secret API keys?