Calculating the angle between a line and the x-axis

I'm currently developing a simple 2D game for Android. I have a stationary object that's situated in the center of the screen and I'm trying to get that object to rotate and point to the area on the screen that the user touches. I have the constant coordinates that represent the center of the screen and I can get the coordinates of the point that the user taps on. I'm using the formula outlined in this forum: How to get angle between two points?

Edit: you mentioned in a comment that y increases from top to bottom. In that case,

But it would be more correct to describe this as expressing (touch_x, touch_y) in polar coordinates relative to (center_x, center_y). As ChrisF mentioned, the idea of taking an "angle between two points" is not well defined.

Had a need for similar functionality myself, so after much hair pulling I came up with the function below

A few answers here have tried to explain the "screen" issue where top left is 0,0 and bottom right is (positive) screen width, screen height. Most grids have the Y axis as positive above X not below.

The following method will work with screen values instead of "grid" values. The only difference to the excepted answer is the Y values are inverted.

in android i did this using kotlin: 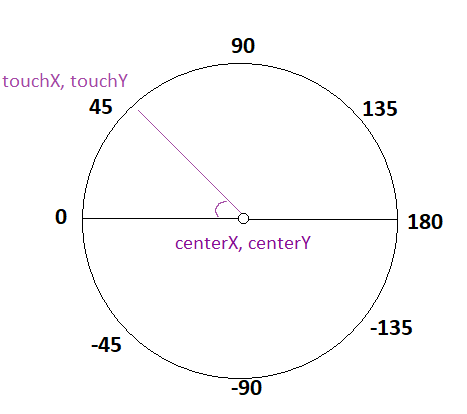 similar to the angle when we drawArc

it work for me

-1
How to calculate an angle of a right triangle knowing two sides?
4
Calculate angle between two lines
3
layering views in android
1
How to determine the max number of points on the same line?
2
Get Movement Direction of Mouse
-4
how to draw an arrow in android touch event?
0
To determine the time when the angle between the clock hands is known in analog clock in android
0
Rotate a rectangle on Canvas in a UWP app
1
Get degree from the line that draw on bitmap
0
Error in calculating the angle of a line
See more linked questions