I've been working on an app on and off for a few months starting with the first XCode 6/iOS 8 beta release. One of my favorite features added is live rendering, made possible with the @IBDesignable tag in Swift.

I haven't been able to get a single thing to live render. I figured that must have been because it was a beta release, so I decided to wait for the full release to come out to try again. It still failed. I figured then that there might be artifacts from the beta releases in my code, so I scrapped it and started fresh. It still doesn't work. Granted, the errors are slightly more descriptive now.

Here are the errors I get when I try to build with one of these buttons in my storyboard:

As you can see in my code, I originally wanted this button to be rounded. I figured this might be the reason for this problem, though it surprised me that Apple would design a rounded rectangle drawing algorithm that inefficient. I switched to simply setting the color and drawing the rectangle as-is. Still had problems.

I figure (I hope, anyway) that there is one small thing that I'm doing wrong, because I've googled and there is no one else that seems to have this problem. Seems like it might be some kind of infinite loop?

It's not something that's necessary for me to continue, but getting live rendering to work will make development a lot faster and easier for me, because I will be able to see my interfaces and test them without having to run them.

Thanks in advance to anyone who has a remote clue on how to solve this.

Apparently I needed to override init(frame: CGRect) along with init(code: NSCoder).

Got it working! If anyone could care to explain why this wasn't working, that would be great. Otherwise, I'm fine here.

Although this might not really be a helpful answer, I found that after looking for a solution for this for half an hour a simple close and re-open of Xcode did the trick - if you haven't tried this yet give it a go!

Make sure you override prepareForInterfaceBuilder to solve this.

Had the same problem but to a glance at this great article. It solved my problem.

To get these options in xcode 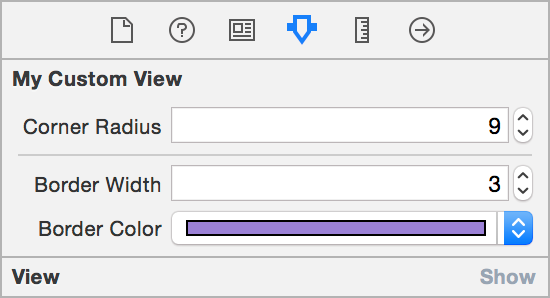 For me, this error turned out to be due to a blocking call to a sqlite database (using CoreData) in one of my @IBInspectable properties.

My code originally queried the database and then used dispatchAsync to set the value of a label based on the results of the query. I changed it so that the query was also launched in the dispatchAsync block. The error immediately went away.

If anyone else is having trouble with this error, I suggest checking out any code that would be executed during the design phase (constructors or computed properties marked with @IBInspetable). If there is any blocking code (network operations, database access, etc.), it might be causing the timeout error. Hope this helps.

Not the answer you're looking for? Browse other questions tagged ios xcode rendering ibdesignable or ask your own question.

478
How to render an ASP.NET MVC view as a string?
0
Not able to call touch event in iphone when clicking on a button
728
Loaded nib but the 'view' outlet was not set
1350
Passing Data between View Controllers
2
swift: sprite kit collisions and bitmask not detected
1
IBDesignable View Rendering
1
This Swift w/ SpriteKit code does not do what is intended