Visually what happens to fork() in a For Loop

I have been trying to understand fork() behavior. This time in a for-loop. Observe the following code:

Here is the output:

I am a very visual person, and so the only way for me to truly understand things is by diagramming. My instructor said there would be 8 hi statements. I wrote and ran the code, and indeed there were 8 hi statements. But I really didn’t understand it. So I drew the following diagram: 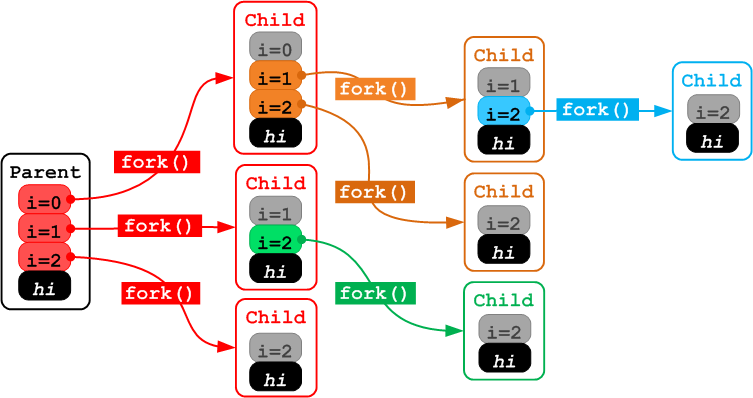 Here are my questions:

Here's how to understand it, starting at the for loop.

A little explanation on the second one:

So i in the forked processes(both parent and child) is the value before increment. However, the increment is executed immediately after fork(), so in my opinion, the diagram could be treat as correct.

To answer your questions one by one:

Is my diagram correct?

Yes, essentially. It's a very nice diagram, too.

That is to say, it's correct if you interpret the i=0 etc. labels as referring to full loop iterations. What the diagram doesn't show, however, is that, after each fork(), the part of the current loop iteration after the fork() call is also executed by the forked child process.

Why are there two instances of i=0 in the output?

The value of i is not changed by fork(), so the child process sees the same value as its parent.

The thing to remember about fork() is that it's called once, but it returns twice — once in the parent process, and once in the newly cloned child process.

For a simpler example, consider the following code:

The child process created by fork() is an (almost) exact clone of its parent, and so, from its own viewpoint, it "remembers" being its parent, inheriting all of the parent process's state (including all variable values, the call stack and the instruction being executed). The only immediate difference (other than system metadata such as the process ID returned by getpid()) is the return value of fork(), which will be zero in the child process but non-zero (actually, the ID of the child process) in the parent.

Every process that executes a fork() turns into two processes (except under unusual error conditions, where fork() might fail). If the parent and child keep executing the same code (i.e. they don't check the return value of fork(), or their own process ID, and branch to different code paths based on it), then each subsequent fork will double the number of processes. So, yes, after three forks, you will end up with 2³ = 8 processes in total.