How do I use audio sample data from Java Sound?

This question is usually asked as a part of another question but it turns out that the answer is long. I've decided to answer it here so I can link to it elsewhere.

Although I'm not aware of a way that Java can produce audio samples for us at this time, if that changes in the future, this can be a place for it. I know that JavaFX has some stuff like this, for example AudioSpectrumListener, but still not a way to access samples directly.

I'm using javax.sound.sampled for playback and/or recording but I'd like to do something with the audio.

Perhaps I'd like to display it visually or process it in some way.

How do I access audio sample data to do that with Java Sound?

Well, the simplest answer is that at the moment Java can't produce sample data for the programmer.

This quote is from the official tutorial:

There are two ways to apply signal processing:

This page discusses the first technique in greater detail, because there is no special API for the second technique.

Playback with javax.sound.sampled largely acts as a bridge between the file and the audio device. The bytes are read in from the file and sent off.

Don't assume the bytes are meaningful audio samples! Unless you happen to have an 8-bit AIFF file, they aren't. (On the other hand, if the samples are definitely 8-bit signed, you can do arithmetic with them. Using 8-bit is one way to avoid the complexity described here, if you're just playing around.)

So instead, I'll enumerate the types of AudioFormat.Encoding and describe how to decode them yourself. This answer will not cover how to encode them, but it's included in the complete code example at the bottom. Encoding is mostly just the decoding process in reverse.

This is a long answer but I wanted to give a thorough overview.

A Little About Digital Audio

A continuous sound wave is sampled at regular intervals and the amplitudes are quantized to integers of some scale.

Shown here is a sine wave sampled and quantized to 4-bit: 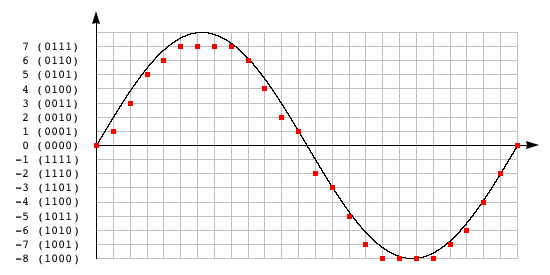 (Notice that the most positive value in two's complement representation is 1 less than the most negative value. This is a minor detail to be aware of. For example if you're clipping audio and forget this, the positive clips will overflow.)

When we have audio on the computer, we have an array of these samples. A sample array is what we want to turn the byte array in to.

To decode PCM samples, we don't care much about the sample rate or number of channels, so I won't be saying much about them here. Channels are usually interleaved, so that if we had an array of them, they'd be stored like this:

In other words, for stereo, the samples in the array just alternate between left and right.

All of the code examples will assume the following declarations:

We'll normalize all of the samples in our float[] array to the range of -1f <= sample <= 1f. All of the floating-point audio I've seen comes this way and it's pretty convenient.

If our source audio doesn't already come like that (as is for e.g. integer samples), we can normalize them ourselves using the following:

How do I coerce the byte array in to meaningful data?

The byte array contains the sample frames split up and all in a line. This is actually very straight-forward except for something called endianness, which is the ordering of the bytes in each sample packet.

Here's a diagram. This sample (packed in to a byte array) holds the decimal value 9999:

They hold the same binary values; however, the byte orders are reversed.

To concatenate the bytes and put them in to our long temp variable, we:

Notice that the shift order is reversed based on endianness.

This can also be generalized to a loop, which can be seen in the full code at the bottom of this answer. (See the unpackAnyBit and packAnyBit methods.)

Now that we have the bytes concatenated together, we can take a few more steps to turn them in to a sample. The next steps depend on the actual encoding.

How do I decode Encoding.PCM_SIGNED?

The two's complement sign must be extended. This means that if the most significant bit (MSB) is set to 1, we fill all the bits above it with 1s. The arithmetic right-shift (>>) will do the filling for us automatically if the sign bit is set, so I usually do it this way:

To understand how this works, here's a diagram of sign-extending 8-bit to 16-bit:

Positive values (that had a 0 in the MSB) are left unchanged. This is a nice property of the arithmetic right-shift.

Java does sign-extension automatically when converting from one integral type to a larger type, for example byte to int. If you know that your input and output format are always signed, you can use the automatic sign-extension while concatenating bytes in the earlier step.

Recall from the section above (How do I coerce the byte array in to meaningful data?) that we used b & 0xFF to prevent sign-extension from occurring. If you just remove the & 0xFF from the highest byte, sign-extension will happen automatically.

How do I decode Encoding.PCM_UNSIGNED?

We turn it in to a signed number. Unsigned samples are simply offset so that, for example:

So this turns out to be pretty simple. Just subtract the offset:

How do I decode Encoding.PCM_FLOAT?

This is new since Java 7.

In practice, floating-point PCM is typically either IEEE 32-bit or IEEE 64-bit and already normalized to the range of ±1.0. The samples can be obtained with the utility methods Float#intBitsToFloat and Double#longBitsToDouble.

These are companding compression codecs that are more common in telephones and such. They're supported by javax.sound.sampled I assume because they're used by Sun's Au format. (However, it's not limited to just this type of container. For example, WAV can contain these encodings.)

You can conceptualize A-law and μ-law like they're a floating-point format. These are PCM formats but the range of values is non-linear.

There are two ways to decode them. I'll show the way which uses the mathematical formula. You can also decode them by manipulating the binary directly which is described in this blog post but it's more esoteric-looking.

Before you can apply the formula, there are three things to do:

For μ-law all the bits are inverted, so:

(Note that we can't use ~, because we don't want to invert the high bits of the long.)

For A-law, every other bit is inverted, so:

(XOR can be used to do inversion. See How do you set, clear and toggle a bit?)

To convert from sign and magnitude to two's complement, we:

Then scale the encoded numbers, the same way as described in Some Assumptions:

Now we can apply the expansion.

The μ-law formula translated to Java is then:

The A-law formula translated to Java is then:

Here's the full example code for the SimpleAudioConversion class.

This is how you get the actual sample data from the currently playing sound. The other excellent answer will tell you what the data means. Haven't tried it on another OS than my Windows 10 machine YMMV. For me it pulls the current system default recording device. On Windows set it to "Stereo Mix" instead of "Microphone" to get playing sound. You may have to toggle "Show Disabled Devices" to see "Stereo Mix".

Not the answer you're looking for? Browse other questions tagged java audio javasound audio-processing javax.sound.sampled or ask your own question.

2
Java - read WAV file as a float array
2908
How do you set, clear, and toggle a single bit?
113
What does value & 0xff do in Java?
8
How to calculate the level/amplitude/db of audio signal in java?
4
Fourier transforming a byte array
6
How can I monitor/sample output audio in Java or C?
2
Apply FFT to audio recording in java
1
Java's sound API doesn't work with all .WAV files?
0
Calculate the level/amplitude/db of audio for two channels
1
Playing sound through SourceDataLine.write - How to use the byte[]-Buffer with double values
See more linked questions

3703
How do I efficiently iterate over each entry in a Java Map?
2501
How do I call one constructor from another in Java?
4466
How do I read / convert an InputStream into a String in Java?
3420
When to use LinkedList over ArrayList in Java?
3872
How do I generate random integers within a specific range in Java?
2212
How to get an enum value from a string value in Java
2514
How do I determine whether an array contains a particular value in Java?
2336
How do I declare and initialize an array in Java?
3325
How do I convert a String to an int in Java?
3537
How can I create a memory leak in Java?