How do I upgrade SQL Server localDB to a newer version?

I would like to be able to do it without losing my tables and data.

I installed a new localDB but I then I don't have my data. It also has another name and I can't really change the config files since it's a team project.

I tried using the command line sqlLocalDB tool to create a 2014 version called v11.0 but it created it in the old 2012 version any way.

Why would naming it v11.0 change which version was used?

How can I upgrade the existing v11.0?

I needed to do it because I tried to add Temporal tables with cascading delete that failed.

Setting SYSTEM_VERSIONING to ON failed because table 'Project.Repository.dbo.Text' has a FOREIGN KEY with cascading DELETE or UPDATE.

Reading up on it it turns out this error only affects SQL Server 2016 and not 2017 and later.

ON DELETE CASCADE and ON UPDATE CASCADE are not permitted on the current table. In other words, when temporal table is referencing table in the foreign key relationship (corresponding to parent_object_id in sys.foreign_keys) CASCADE options are not allowed. To work around this limitation, use application logic or after triggers to maintain consistency on delete in primary key table (corresponding to referenced_object_id in sys.foreign_keys). If primary key table is temporal and referencing table is non-temporal, there's no such limitation.

This limitation applies to SQL Server 2016 only. CASCADE options are supported in SQL Database and SQL Server 2017 starting from CTP 2.0.

You can get information about your current localDBs by running the command sqllocaldb info in Powershell.

This is quite a good upgrading guide but I choose to do some things a bit differently. 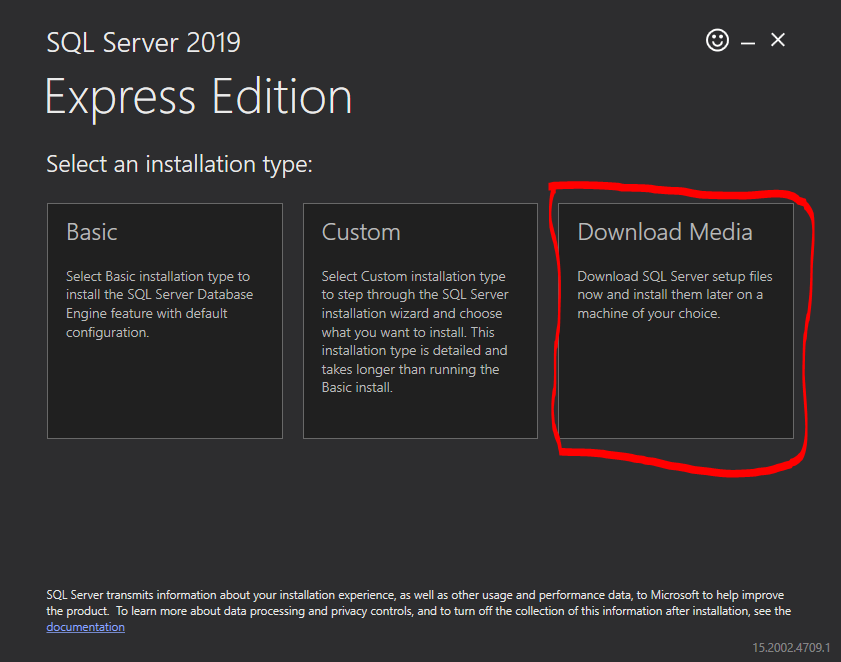 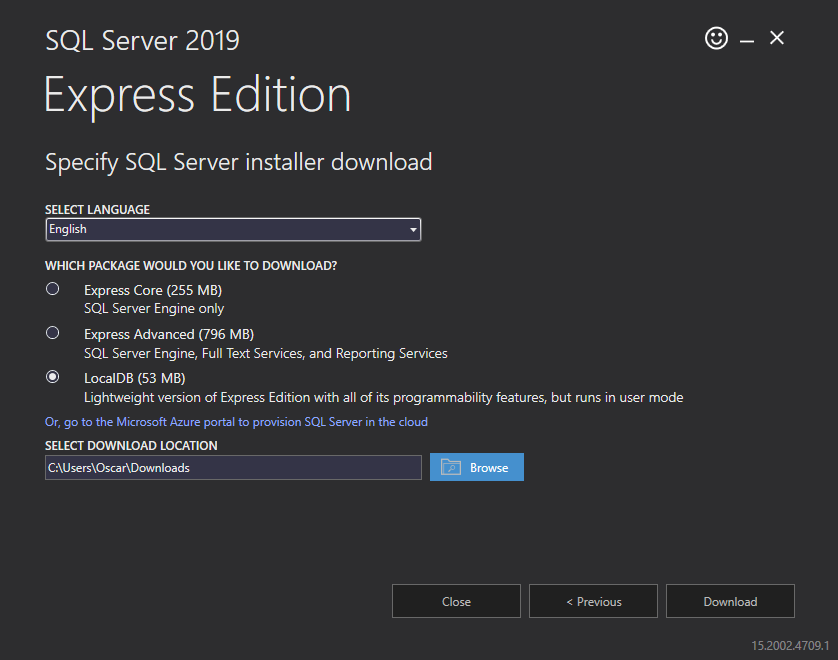 Install from the downloaded exe: 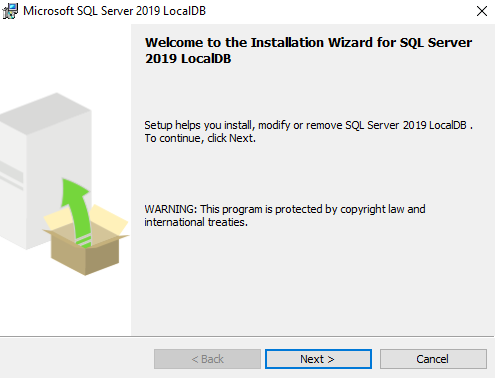 My recommendation is to restart your computer after this but I'm not sure it is needed. I did it anyway.

Solved it using this answer:

This is how Registry Editor (regedit) looks like in the non working example: 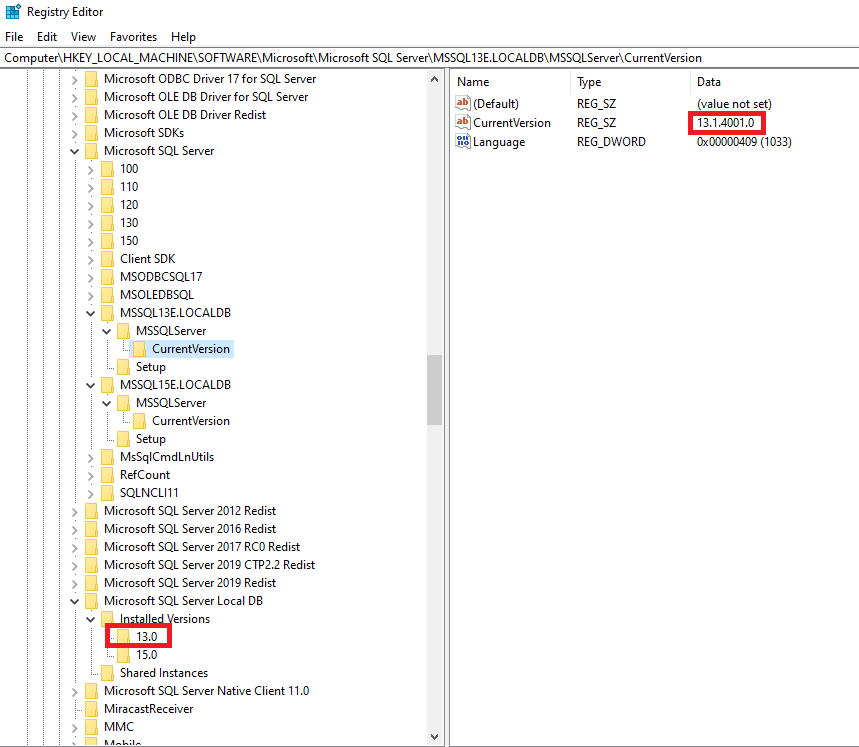 After changing the folder name everything works: 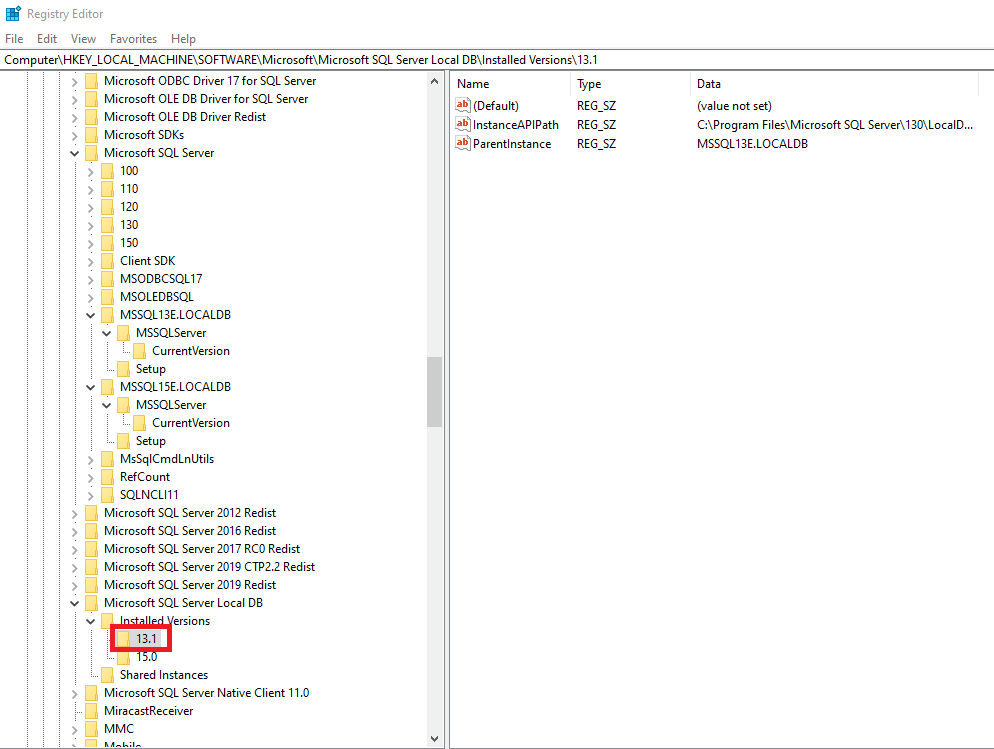 I have the standard name MSSQLLocalDB from Visual Studio so my example will use this. As mentioned before you can use sqllocaldb info command to view your current versions.

Run these three commands from powershell:

If everything works the last command should generate something like LocalDB instance "mssqllocaldb" created with version 15.0.2000.5. 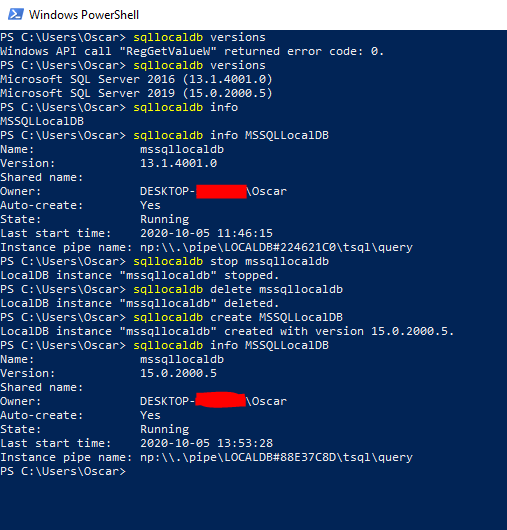 Then log into your new LocalDB via SSMS (localdb)\mssqllocaldb or a similar program and attach your old databases. Usually stored in the %UserProfile% folder. 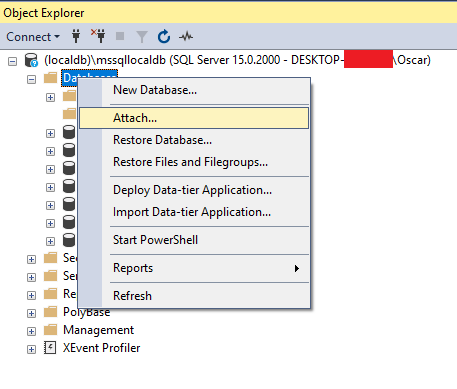 LocalDB is now updated and hopefully all your databases works normally.

As stated in this link from MSDN (Not too well chosen title...) the conversion should be triggered somewhat just double clicking on the .mdf file... This didn't happened in my case (maybe because it's necessary to have the Sql Server Management Studio software or something similar for this to be truth).

So, here is an alternative procedure:

And that's it. Not very intuitive at all, but effective. I haven't found any documentation on it other than te link mentioned before, all the other steps were pure intuition but worked for me, I hope for you too.

To target a specific version of LocalDb, use 12.0 or 11.0 as a parameter. For instance:

The reason your command failed was because you were referencing the version incorrectly. This isn't all too clear in the -? info.

Using "v12.0" as the first parameter merely sets the instance name. If no second version parameter is given, the default version is used.

It seems that v11.0 is a special name for the LocalDB 2012 automatic instance. And it is strictly tied to this version. While 2014 and 2016 versions share the same MSSQLLocalDB name for that purpose.

I would also add to @Ogglas's answer that if you want to migrate it automatically in your software, you can follow this steps.

Do these steps when upgrading (upgrade step or upgrade code):

Not the answer you're looking for? Browse other questions tagged sql-server upgrade localdb or ask your own question.