When running mysql-workbench on Ubuntu 14.10 I am getting unexpected behavior in the GUI. If I double click on a table in the EER diagram editor I can't see a list of columns and their attributes. My screen looks like this: 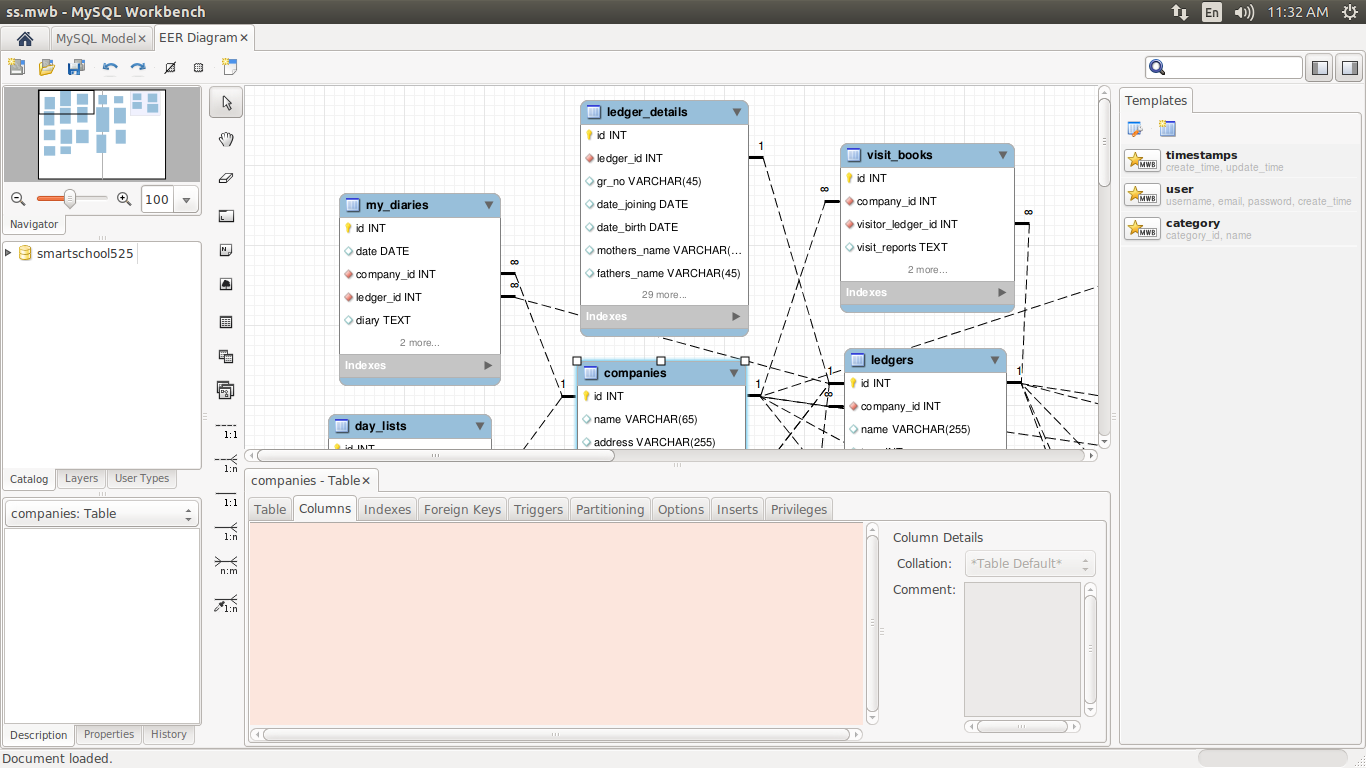 When I double click on a table in the diagram editor the expected behaviour is to list each column in the table along with its attributes within the area highlighted in pink. I should be able to modify, delete, and add columns.

Why am I seeing this behaviour and how can I fix it?

I can confirm the behavior you are seeing. It doesn't work on Ubuntu 14.10 and works On Ubuntu 14.04. I use mysql-workbench on Debian Wheezy with the expected behavior. So your question caught my attention because it appeared to be a bug.

I ran it from the command line to see what was on the console. When using the EER Diagram Editor with a sample model I was greeted with a blank pane where columns and their attributes should be listed. The console shows these unexpected assertions:

There were far more errors but I have cut the list short. These assertions suggest to me that there is a bug while creating the window pane where the column data. It isn't just the column data where this happens but on a majority of the panes at the bottom.

I work on an open source project that also had issues with Ubuntu 14.10 and it also involved Glib assertions appearing where they didn't occur before. The Glib developers have begun adding more assertions to their code to identify software bugs. It is possible that something similar applies here. In the case of the project I maintain the assertions were indicative of a problem in our project code and the newer versions of Glib made our code fail.

With that in mind I looked on the Ubuntu launchpad site. There is this bug report with the title Workbench not showing tables or query results in raring that was opened last year but people are now identifying the issue with 14.10 as well (many in the past week). I believe it is related to what you are seeing. I also observed there are nearly 3 dozen people at this time that have reported a problem. You could create an account and add yourself to the list of people experiencing a problem.

There is good news and bad news. The MySQL workbench developers have identified and fixed the problem in their latest builds. The MySQL bug report link has this to say:

Fixed as of the upcoming MySQL Workbench 6.2.4 release, and here's the changelog entry:

On Linux, the query result view did not populate with libglib version 2.42 and above.

Unfortunately Ubuntu doesn't have a patch or work around in their official repositories yet. I think you have a few options:

There isn't much to tell just from your image. So I'll provide you will some common fixes for this problem:

Sometimes this happens, not all programs are perfect (you loaded a good amount of data).

Not the answer you're looking for? Browse other questions tagged mysql linux mysql-workbench ubuntu-14.10 or ask your own question.