Recently in an official .NET Framework Blog it was announced that .NET Core is going open source.

Ironically, the author mentions that what .NET Core is will be explained in the next post. Some more details are mentioned in another announcement post.

From a supplied diagram: 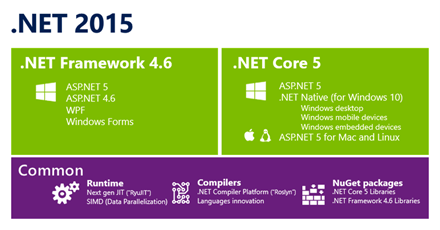 and articles text itself, I would assume that .NET Core (beside obvious things like being open-sourced) is a modular re-implementation of the full .NET. I.e. framework components are loaded as necessary, much like NuGet packages are loaded now. And now ASP.NET 5 is one of the modules that is already implemented. Is my understanding of .NET Core correct? Maybe I'm missing something?

I have found a recent article which I found both short and very good. It covers .NET Standard, .NET Core, and .NET Framework and their relationship. I highly recommend it.

.NET Core has two major components. It includes a small runtime that is built from the same codebase as the .NET Framework CLR. The .NET Core runtime includes the same GC and JIT (RyuJIT), but doesn’t include features like Application Domains or Code Access Security. The runtime is delivered via NuGet, as part of the [ASP.NET Core] package.

In short: first, there was the Microsoft .NET Framework, which consists of a runtime that executes application and library code, and a nearly fully documented standard class library.

Microsoft's specification and implementation of .NET were, given its history and purpose, very Windows- and IIS-centered and "fat". There are variations with fewer libraries, namespaces and types, but few of them were useful for web or desktop development or are troublesome to port from a legal standpoint.

So in order to provide a non-Microsoft version of .NET, which could run on non-Windows machines, an alternative had to be developed. Not only the runtime has to be ported for that, but also the entire Framework Class Library to become well-adopted. On top of that, to be fully independent from Microsoft, a compiler for the most commonly used languages will be required.

Mono is one of few, if not the only alternative implementation of the runtime, which runs on various OSes besides Windows, almost all namespaces from the Framework Class Library as of .NET 4.5 and a VB and C# compiler.

Enter .NET Core: an open-source implementation of the runtime, and a minimal base class library. All additional functionality is delivered through NuGet packages, deploying the specific runtime, framework libraries and third-party packages with the application itself.

ASP.NET Core is a new version of MVC and WebAPI, bundled together with a thin HTTP server abstraction, that runs on the .NET Core runtime - but also on the .NET Framework.

It is a sub-set of the .NET Framework, started with the Compact Framework edition. It progressed into Silverlight, Windows Store and Windows Phone. It focused on keeping the deployment small, suitable for quick downloads and devices with limited storage capabilities. And it is easier to bring up on non-Windows platforms, and surely this was the reason it was chosen as the open sourced edition. The "difficult" and "expensive" parts of the CLR and the base class libraries are omitted.

Otherwise, it is always easy to recognize when you target such a framework version, because lots of goodies will be missing. You'll be using a distinct set of reference assemblies that only expose what is supported by the runtime. It is stored on your machine in the C:\Program Files (x86)\Reference Assemblies\Microsoft\Framework\.NETCore directory.

Update: after the .NET Core 2.0 release I've seen some representative numbers that gives a decent insight. They have been hard at work back-porting framework APIs to .NET Core over the past two years. .NET Core 1.0 originally supported 13,000 APIs. .NET Core 2.0 added 20,000 APIs, bringing the total to 32,000 and allowing about 70% of existing NuGet packages to be ported. There are a set of APIs that are too heavily wedded to Windows to be easy to port to Linux and MacOS. Covered by the recently released Windows Compatibility Pack, it adds another 20,000 APIs.

I have found a recent article which I found both short and very good. It covers .NET Standard, .NET Core and .NET Framework and their relationship. I highly recommend it. Unfortunately, I have no time to adapt and put it here.

So, based on the latest official entry on the subject, here are some key points as I see them:

.NET Core is essentially a fork of the .NET Framework whose implementation is also optimized around factoring concerns.

So .NET Native and ASP.NET 5 are just a test "subjects" for new framework configuration, partially this maybe because they are quite different: 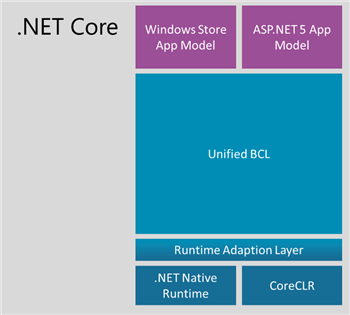 See, they even need separate low-level, but a major part of BCL is still common:

I.e., magenta rectangles on top will be added massively with new App Models, but the base will remain common.

In contrast to the .NET Framework, the .NET Core platform will be delivered as a set of NuGet packages. We’ve settled on NuGet because that’s where the majority of the library ecosystem already is.

The .NET Core platform is a new .NET stack that is optimized for open source development and agile delivery on NuGet. We’re working with the Mono community to make it great on Windows, Linux and Mac, and Microsoft will support it on all three platforms.

Basically this can be thought as a .NET 4.6 with a changed distribution model, which, simultaneously, is being in a process of becoming open source.

The current documentation has a good explanation of what .NET Core is, areas to use and so on. The following characteristics best define .NET Core:

Flexible deployment: Can be included in your app or installed side-by-side user- or machine-wide.

Cross-platform: Runs on Windows, macOS and Linux; can be ported to other OSes. The supported operating systems (OSes), CPUs and application scenarios will grow over time, provided by Microsoft, other companies, and individuals.

Command-line tools: All product scenarios can be exercised at the command-line.

Compatible: .NET Core is compatible with .NET Framework, Xamarin and Mono, via the .NET Standard Library.

And here is what .NET Core includes:

A .NET runtime, which provides a type system, assembly loading, a garbage collector, native interoperability and other basic services.

A set of SDK tools and language compilers that enable the base developer experience, available in the .NET Core SDK.

.NET Core is a new cross-platform implementation of .NET standards (ECMA 335) similar to Mono but done by Microsoft itself.

Microsoft recognized the future web open source paradigm and decided to open .NET to other operating systems. .NET Core is a .NET Framework for Mac and Linux. It is a “lightweight” .NET Framework, so some features/libraries are missing.

You can develop full-fledged web sites and RESTful APIs on Mac or Linux with Visual Studio Code + .NET Core which wasn't possible before. So if you love Mac or Ubuntu and you are a .NET developer then go ahead and set it up.

For Mono vs. .NET Core, Mono was developed as a .NET Framework for Linux which is now acquired by Microsoft (company called Xamarin) and used in mobile development. Eventually, Microsoft may merge/migrate Mono to .NET Core. I would not worry about Mono right now.

These technologies are different than native .NET in that they run using CoreCLR runtime (used in the Universal Windows Platform).

As you mentioned in your question, .NET Core is not only open-source, but portable as well [runs on MacOS, Windows, and Linux]

The internals of .NET Core are also optimised to not use different modules from its core library unless it is required by the application. 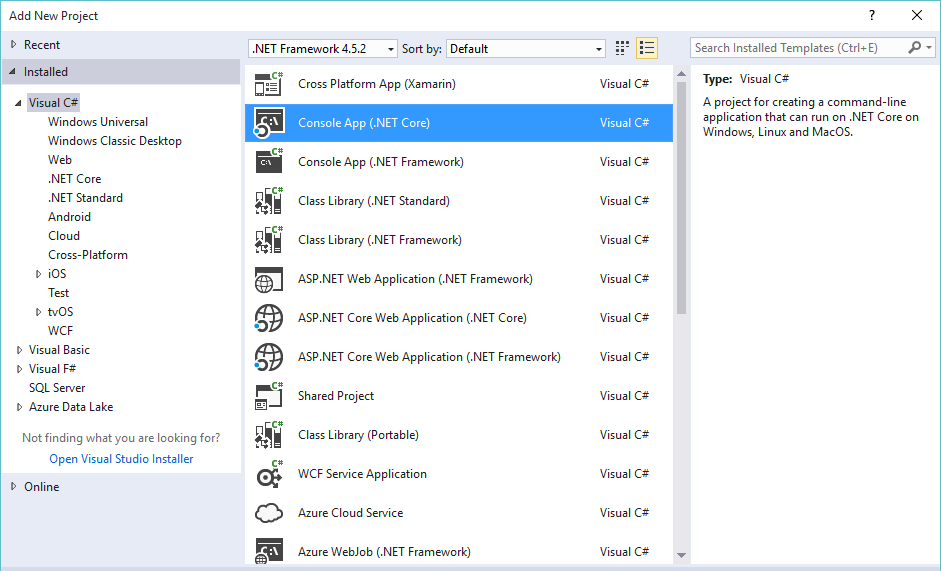 I came across this documentation link and found it very useful, so I am sharing. The details of the bullets are also provided in the article. I am just posting bullets here:

You should use .NET Core for your server application when:

You should use .NET Framework for your server application when:

.NET Core is a free and open-source, managed computer software framework for Windows, Linux, and macOS operating systems. It is an open source, cross platform successor to .NET Framework.

.NET Core is an open source and cross platform version of .NET Framework.

.NET Core is an open source and cross platform version of .NET. Microsoft products, besides the great abilities that they have, were always expensive for usual users, especially end users of products that has been made by .NET technologies.

Most of the low-level customers prefer to use Linux as their OS and before .NET Core they would not like to use Microsoft technologies, despite the great abilities of them. But after .NET Core production, this problem is solved completely and we can satisfy our customers without considering their OS, etc.

93
C# JIT compiling and .NET
50
Difference between .Net Core, Portable, Standard, Compact, UWP, and PCL?
46
Do I need to install MVC 3/4 on web server to run mvc application
6
Why does the default mvc6 template target multiple DNX Versions?
1
Visual Studio Net Core Web App: No option to output as web app in project properties?
1
Can I run my .NET program in a container?