What's the difference between SVN and Git for merging?

As the title suggests, I am curious as to why so many people tout Git as a superior alternative to branching/merging over SVN. I am primarily curious because SVN merging sucks and I would like an alternative solution.

How does Git handle merging better? How does it work?

For example, in SVN, if I have the following line:

Then user1 changes it to:

then user2 changes it to:

Then user2 commits, then user1 commits, SVN would give you a conflict. Can Git resolve something simple as this?

That is called on merge with conflict, and no VCS will ever solve that for you.
You will have to manually solve the merge yourself.

As mentioned in Why merging in git is better than SVN, the actual difference is in the history recording of commits:

That allows Git to remember what has already merged, reducing considerably the conflicts occurrences. 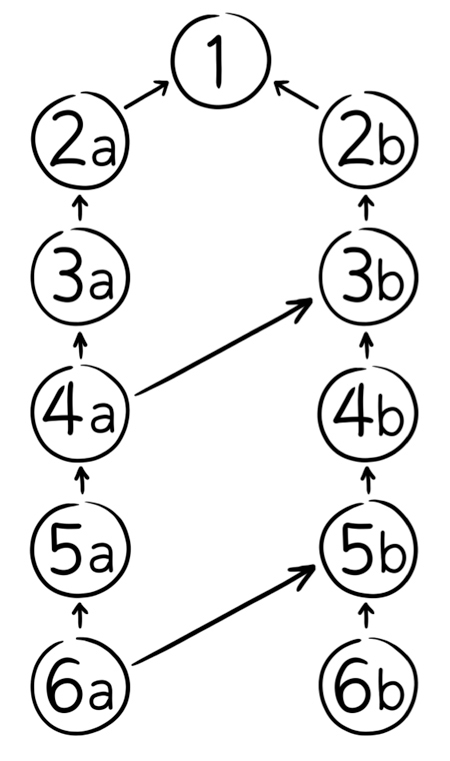 So, when it comes time to do merge from 5b over to the (a) branch, we can use information in the DAG to know that 3b and 2b are already done

So it is the merge workflow that Git will handle much more gracefully than SVN:
See Merge Git vs. SVN for concrete examples.

The specific conflict you mention is always unresolvable. There's simply no way for a merge tool to know which version should be kept.

Git is probably better than SVN at dealing with resolvable conflicts, though. Its primary merge strategy is recursive, which finds the common ancestor of two commits changing the same file and does a three-way merge. It also has some built-in capability for recording and reusing conflict resolutions (git-rerere) and a variety of other merge strategies for special cases.

Git's advantage in merging is that it's part of the history. A merge commit is a commit with two parents. Git's model of history (a directed acyclic graph) expects there to be commits like this. This means that further merges in the future work exactly how they should. Always. (Yes, there are sometimes conflicts, but they're real conflicts, not an inability to handle the merge.)

SVN, on the other hand, just tries to track where merges occurred, but its model is still inherently linear. The history still just has a single string of commits, with merge tracking information providing extra help. From what I've heard, SVN can't always handle more complex merge patterns correctly. (One example is a reflective merge - merging A into B then B into A.)

Not the answer you're looking for? Browse other questions tagged svn git or ask your own question.

404
How and/or why is merging in Git better than in SVN?
138
How do you maintain development code and production code?
144
Merging: Hg/Git vs. SVN
51
Describe your workflow of using version control (VCS or DVCS)
7
Arrows direction in ProGit book
17
Android Studio - unable to merge from SVN branch
4
SVN modifies svn:mergeinfo property on files with no change
0
Is there a better solution than SVN in teamwork?
1
Working with SVN branches git-style

7166
How to remove local (untracked) files from the current Git working tree
4964
How to resolve merge conflicts in Git repository?
12389
What is the difference between 'git pull' and 'git fetch'?
9574
How do I undo 'git add' before commit?
22306
How do I undo the most recent local commits in Git?
7787
How do I force “git pull” to overwrite local files?
17721
How do I delete a Git branch locally and remotely?
1782
Make the current Git branch a master branch
7626
How do I revert a Git repository to a previous commit?
9157
How do I rename a local Git branch?