How to install android ndk in linux?

I have downloaded android NDK from here: http://developer.android.com/tools/sdk/ndk/index.html
for Linux 64-bit (x86) android-ndk-r10c-linux-x86_64.bin. How I do install it? The instructions don't work. My OS is

Android's NDK now ships as an self extracting executable. You likely need to set the executable bit:

The above will cause the NDK to extract into the current working directory.

Since the .bin file is really just a 7-Zip self extracting archive, you can manually extract the contents if needed:

7-Zip is available in Ubuntu for example via apt-get:

Update
As of at least r14b on the NDK download page, we're back to standard ZIP archives.

If you already have AndroidStudio installed:

From an open project, select Tools > Android > SDK Manager from the menu bar. Click the SDK Tools tab. Check the boxes next to LLDB, CMake, and NDK. Apply 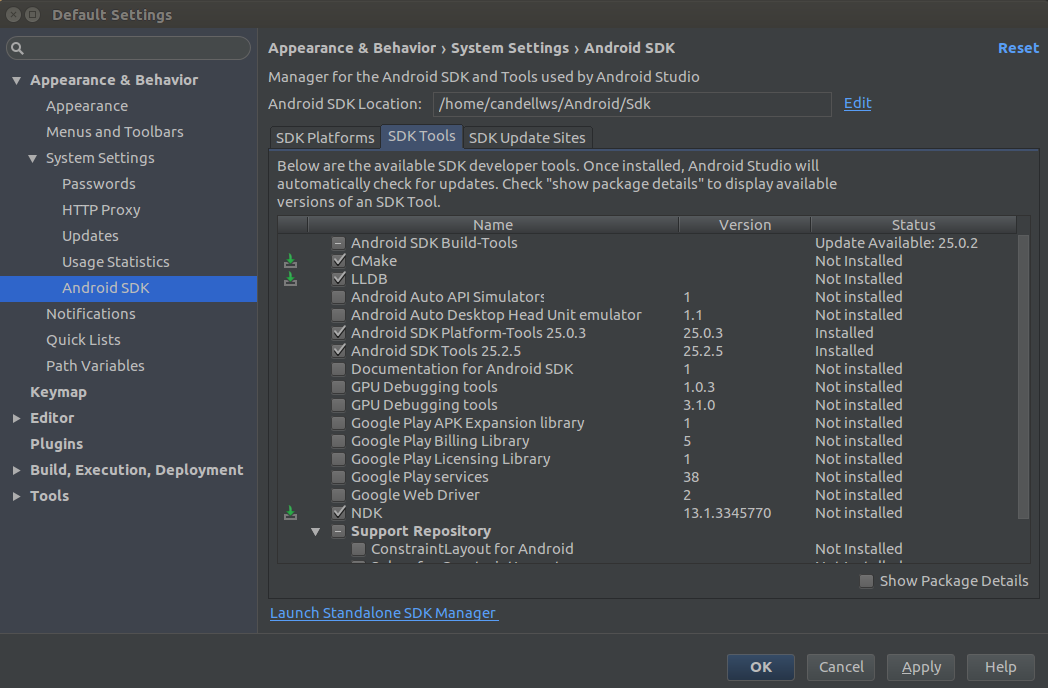 Go to the directory where you downloaded it. Then execute:

It should unpack right there. The toolchain will be in android-ndk-r10c-linux-x86_64/toolchains. The root folder might have a slightly different name.

I have androidBBQ which is archlinux based, installed using vmware. But I guess my instructions should be the same for any linux distribution. I used AndroidStudio's built-in SDK manager, to try installing NDK. Download failed because there was no space in /tmp. Turns out that most Linux distros have ramdisk baesd tmpfs (temporary file system in RAM which is mounted at /tmp) and there is no separate partition which could be extended. /tmp is mounted usually by using 50% of available RAM.

Install NDK using Android Studio's built-in SDK manager ->not so convenient
a) Extend /tmp
I edited my fstab as root, using this command :

I appended this line to my fstab

Note: If no such line exists, add above line at end of fstab. If any such line exists, it means you had already extended your /tmp and it was still insufficient. So, only change the "size" value, by raising it by a few GBs.
Then I rebooted. Once I did, my /tmp was extended to 8GB size. For development purposes, I guess we should readily extend our /tmp because we will have to do it anyway some time later. Size of /tmp is not dependent on free space in our hard disk (whether virtual or physical).

b) run NDK install again
I ran the NDK install from within AndroidStudio again. It had to download the NDK zip afresh. Unfrotunate that there is no resume/recheck function to resurrect broken installs. My download speed was slow, so I minimized the virtual linux's window and continued to read news. Later, I guess memory/page swapping occurred. The download failed. I restarted Linux and restarted NDK install the same way. This time, I let the virtual Linux machine stay on foreground. NDK installed fine with this log :

Manual NDK install in Linux (preferable) I am amazed that official Android dev section did not bother indicating exact install location of Android NDK. Android Studio looks for NDK at:

Not the answer you're looking for? Browse other questions tagged ubuntu android-ndk installation or ask your own question.