What is <scope> under <dependency> in pom.xml for?

Looking at documentation http://maven.apache.org/surefire/maven-surefire-plugin/examples/testng.html, we can see <scope> tag under <dependency>

What is that and how can we use it for running test?

This scope is used to limit the transitivity of a dependency, and also to affect the classpath used for various build tasks.

This is much like compile, but indicates you expect the JDK or a container to provide the dependency at runtime. For example, when building a web application for the Java Enterprise Edition, you would set the dependency on the Servlet API and related Java EE APIs to scope provided because the web container provides those classes. This scope is only available on the compilation and test classpath, and is not transitive.

This scope indicates that the dependency is not required for compilation, but is for execution. It is in the runtime and test classpaths, but not the compile classpath.

This scope indicates that the dependency is not required for normal use of the application, and is only available for the test compilation and execution phases.

This scope is similar to provided except that you have to provide the JAR which contains it explicitly. The artifact is always available and is not looked up in a repository.

import (only available in Maven 2.0.9 or later)

This scope is only used on a dependency of type pom in the section. It indicates that the specified POM should be replaced with the dependencies in that POM's section. Since they are replaced, dependencies with a scope of import do not actually participate in limiting the transitivity of a dependency.

To answer the second part of your question:

How can we use it for running test?

Note that the test scope allows to use dependencies only for the test phase.

Read the documentation for full details. 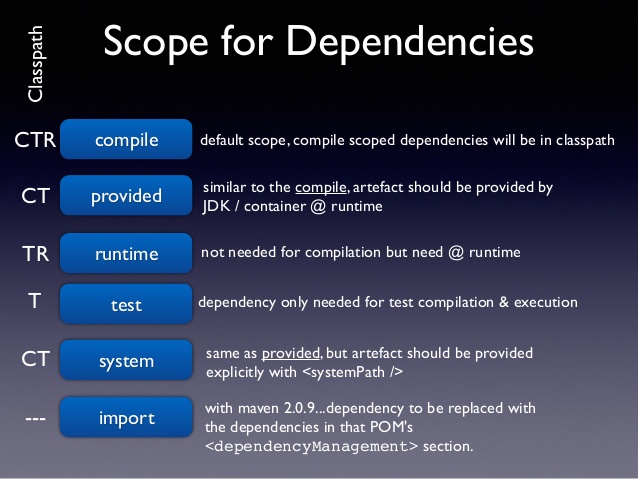 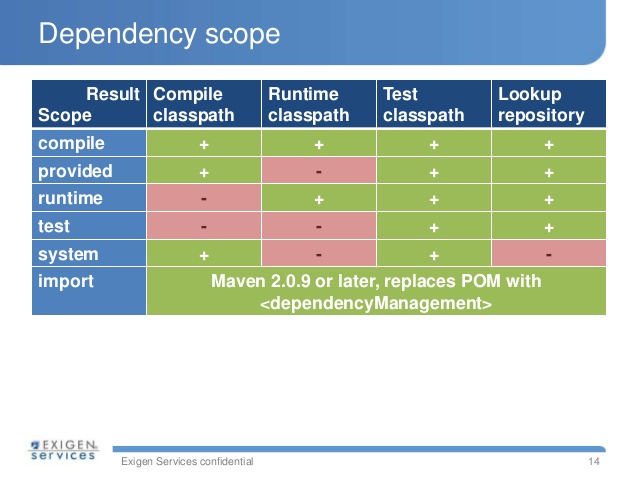 Scope tag is always use to limit the transitive dependencies and availability of the jar at class path level.If we don't provide any scope then the default scope will work i.e. Compile .

If we don't provide any scope then the default scope is compile, If you want to confirm, simply go to Effective pom tab in eclipse editor, it will show you as compile.

Not the answer you're looking for? Browse other questions tagged maven pom.xml or ask your own question.

1212
What's the difference between implementation, api and compile in Gradle?
120
Can a program depend on a library during compilation but not runtime?
22
Jackson cannot access com.fasterxml.jackson.core.ObjectCodec
12
Maven Jetty spams warning "scanned from multiple locations"
5
How can I resolve my class from a different jar with same structure like another
3
NoClassDefFoundError when running flink with kafka connector
0
Tomcat server is not starting in IntelliJ IDEA
0
When is "el-api" useful in pom.xml?
2
Why does mvnrepository.com label MS SQL Server JDBC driver in "test" in scope
1
NoClassDefFoundError: javax/json/bind/JsonbBuilder even after adding javaee-api to dependencies
See more linked questions

305
Find Oracle JDBC driver in Maven repository
943
Differences between dependencyManagement and dependencies in Maven
716
When maven says "resolution will not be reattempted until the update interval of MyRepo has elapsed", where is that interval specified?
693
IntelliJ inspection gives "Cannot resolve symbol" but still compiles code
966
How to solve "Plugin execution not covered by lifecycle configuration" for Spring Data Maven Builds
774
Dealing with "Xerces hell" in Java/Maven?
153
What is the difference in maven between dependency and plugin tags in pom xml?
321
What is the maven-shade-plugin used for, and why would you want to relocate Java packages?
0
In pom.xml can we keep maven-compiler-plugin and maven-surefire-plugin under a dependency tag instead of plugin tag?