What is the difference between these 2 relationships?

Edit: Also if you could provide a simple code example illustrating the difference, that would be really helpful!

I'm trying to give simple examples of the two types of lines.

In the first diagram, the solid line shows an association:

If the classes were declared in Java, this would be like ClassA storing a reference to ClassB as an attribute (it could be passed in to the constructor, created, etc.). So, you might see something like:

In the second diagram, it shows a dependency:

A dependency is much weaker than an association. To quote from UML Distilled:

With classes, dependencies exist for various reasons: One class sends a message to another; one class has another as part of its data; one class mentions another as a parameter to an operation. [...] You use dependencies whenever you want to show how changes in one element might alter other elements.

Again, using Java, a couple of examples exist: an argument of type ClassB is passed to a method, or a method declares a local variable of type ClassB:

Other ways ClassA could depend on ClassB without having an association (not an exhaustive list):

This webpage says enough I think: http://www.classdraw.com/help.htm The following text comes from it but should be enough to understand the difference I think.

So basically the solid line is an association and the dashed/dotted line is a dependency.

Associations can also be unidirectional, where one class knows about the other class and the relationship but the other class does not. Such associations require an open arrowhead to point to the class that is known and only the known class can have a role name and multiplicity. In the example, the Customer class knows about any number of products purchased but the Product class knows nothing about any customer. The multiplicity "0..*" means zero or more.

A dependency is a weak relationship between two classes and is represented by a dotted line. In the example, there is a dependency between Point and LineSegment, because LineSegment's draw() operation uses the Point class. It indicates that LineSegment has to know about Point, even if it has no attributes of that type. This example also illustrates how class diagrams are used to focus in on what is important in the context, as you wouldn't normally want to show such detailed dependencies for all your class operations.

Since my reputation is only 8 I can't place the images itself, but they can still be found on the webpage I mentioned at the start.

I don't have code examples right here, but how I personally would explain it is as simple as a car and a door.

In this way you have created a dependency.

So the solid line is just pointing an object(1) to another object(2), but when you start using the object(1) it becomes a dependency.

Your question gave me a good chance to learn myself, here is what I found - 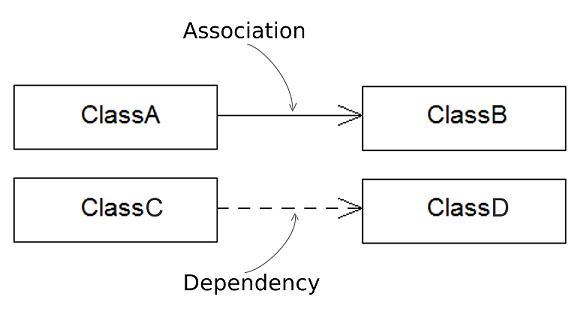 Association: Ownership of another type (e.g. 'A' owns a 'B')

Here's a crisp ref I found - Association vs. Dependency

Okay, since you didn't accept the first answer; let me try. 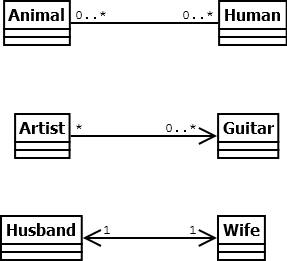 UML has different types of lines and arrows. Above is the simple association arrow, that means that one class can have a link to the other class. Below I will explain each type WITH code examples.

How do we accomplish this usually in code?

Because the husband always needs a wife, we put the required relationship in the constructor. Because an artist can have a guitar, we would leave the constructor empty like this:

So, that's how we accomplish this in code (most of the time!). You won't usually need different types of lines and arrows if you are new to programming. Keep it simple.

Okay, so we know about normal associations which we will use most of the time. But when will we use the 'dependency' arrow? Well, lets define a dependency (wikipedia):

If there is a connection, relation, association etc. that requires to be present, to the classA to work; it's a dependency. Example: Husband needs the Wife to exist. A car needs a wheel to be a car (and drive). A car factory needs a car class to make an object from it. Your RSSNewsItem class needs an XMLReader class to do anything.

Well, this is the only valid question in my eyes; since google shows alot of valid answers to your question. Try to never use a dependency in a class diagram because it usually means that you aren't specific enough. Always aim for associations, realisations etc. Only use realisations (in my opinion) if there is a required need to use an other class without maintaining a relationship. Example; Utility classes (like the XMLReader).

If you have any questions after reading this full explanation, feel free to ask. :-)

Dotted line indicates dependency to (in the direction of the arrow). Assuming you have assembled your source code neatly into separate files and headers for each class - the give away is simply that the code includes the line #include ClassB.h.

HOWEVER The fact of the matter is that all class relationships (generalisation, realisation, composition, aggregation, association etc) all inherit the dependency relationship. For this reason I never use dotted arrows when documenting code. Where possible I would aim to document the relationship in more specific terms eg. diamonds, triangles etc. If I don't know the exact relationship my starting point is a solid line with arrows (an association, with (implicit) dependence).

Notwithstanding this the dotted arrow notation can be useful in other aspects of UML modelling eg. showing dependencies to requirements in Use Case analysis for example. NOTE The Thought Police would have us reduce coupling & dependencies between classes by using interfaces (pure virtual classes) as far as practical.

Whilst pure virtual classes offer the prospect of multiple inheritance and tightest coupling of all between classes as is possible. Interface classes have the advantage that they are made entirely out of dark matter and so totally invisible to the police. With this in mind it is possible to write c++ code with apparently zero coupling between classes -which they love because they never really did understand all those funny looking symbols anyway.

Not the answer you're looking for? Browse other questions tagged language-agnostic uml relationship class-diagram or ask your own question.