I have an XCode workspace created with XCode 6.0.1. It constains 2 (Swift) libraries and one iOS app (Swift) that depends on those 2 libraries. I had stable setup that allowed me to run the iOS app on both iPhone and simulators: The 2 library projects were added as Embedded Binaries (see picture) of the app.

Now, I have XCode 6.1. Recently, I deleted DerivedData folder in ~/Library/Developer/Xcode folder while XCode was running. After that my workspace did not work - the iOS app would fail to compile and I got linker error saying it cannot find the library projects.

Why I cannot add library projects to Embedded Binaries? Is it normal in XCode 6.1 that dependency projects just compile and gets embedded into an app without being listed or linked anywhere? 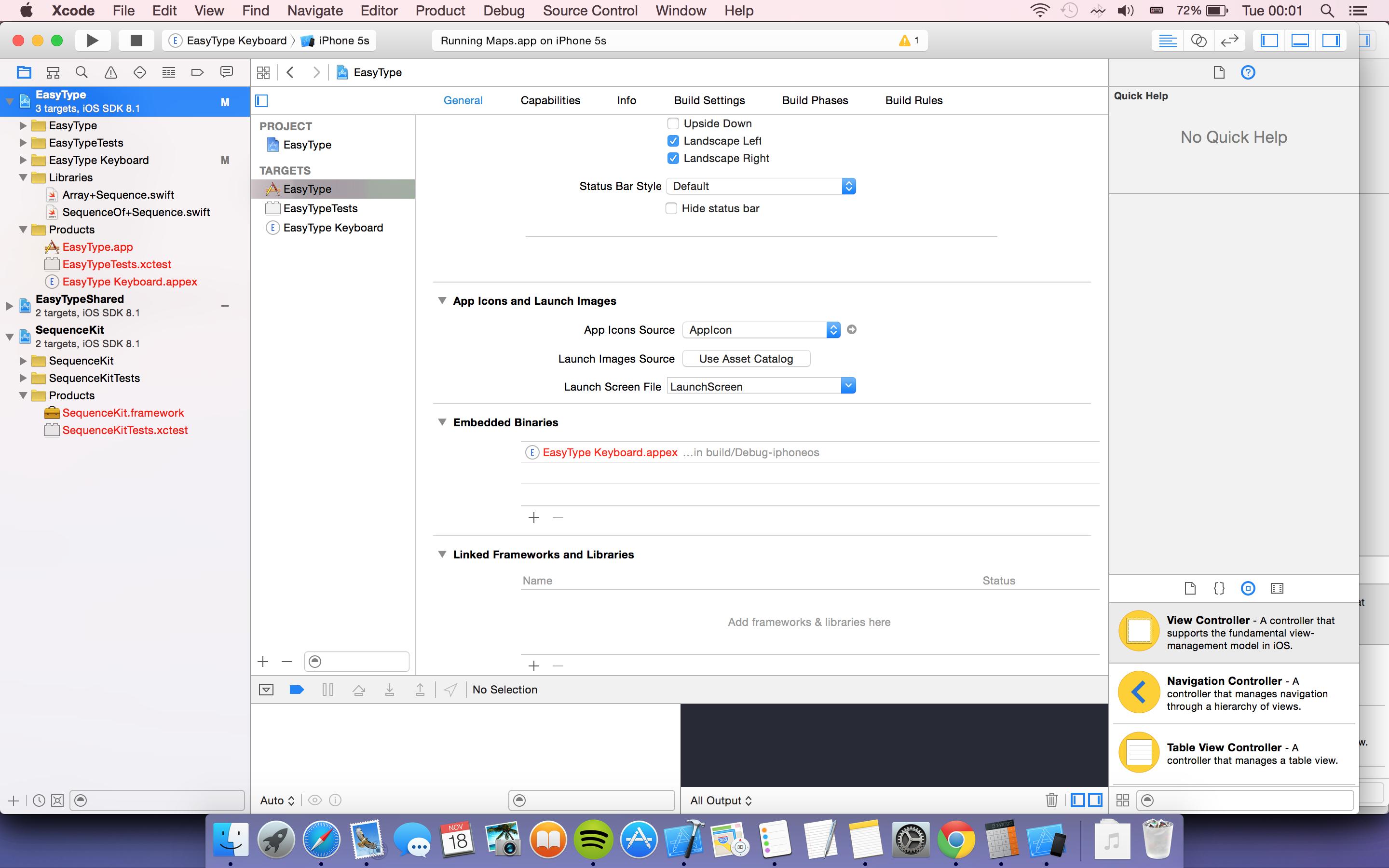 This is a summary of my answer to the question Xcode won't add “Embedded binary” after deleting “DerivedData”, see the original question and answer for more context and information:

Ok, I ran into the same problem as you. After deleting the derived data, I could not re-link my binaries again. I think the reason is because the derived data is where the binaries are written to and linked against in your project.

What I did to solve was to select my Framework as my build target. After building it, the Framework target turned from red to black. I can see in your screenshot it is red, meaning it has not been compiled into a binary and written on disk.

Once I did this, I was able to re-link the Framework to my Project because there was a reference to it on disk. Hope this helps!

Clean your projects & build your framework first. Thereafter you can embed it.

Here is how I solved the problem:

Xcode should notice the change and the library in the app project will be black instead of red and will now build and run properly.

I have a very similar issue and fixed it just last night. Decided to come back to this thread and offer my workaround, as rjstelling's solution above did not help my case.

I have a workspace that contains two frameworks and one application. The App was making use of both frameworks happily for a while until I got hit by a mysterious compile eror where it decided that adding a property access to an instance variable called "cube" of a class type found in one of the framework, made access to "_cube" impossible (complaining it was not declared, while it had actually worked previously in a setter method).

Reverting the project & workspace to an earlier version did not get rid of the voodoo.

I ended up adding the to-be-embeded framework projects in the main app project (as files) and introduced target dependencies on the frameworks.

I was then able to re-embed the frameworks and link.

As for the _cube thing, I had to specify a getter for the property and @synthesize the property to a different name. I dont have an explanation for this one.

It's probably because your framework is a separate project and not a separate target. Try watching carefully Session 416: Building a Modern Framework at around minutes 34-36. It will show you how to set it up correctly.

Not the answer you're looking for? Browse other questions tagged ios xcode project project-management linker-errors or ask your own question.

918
Git ignore file for Xcode projects
1460
How to "add existing frameworks" in Xcode 4?
405
File is universal (three slices), but it does not contain a(n) ARMv7-s slice error for static libraries on iOS, anyway to bypass?
326
Can I safely delete contents of Xcode Derived data folder?
622
iOS app with framework crashed on device, dyld: Library not loaded, Xcode 6 Beta
440
dyld: Library not loaded: @rpath/libswiftCore.dylib
14
Xcode won't add "Embedded binary" after deleting "DerivedData"
441
Getting error "No such module" using Xcode, but the framework is there
95
What is the difference between Embedded Binaries and Linked Frameworks
5
Xcode - Why there is no "Embedded Binaries" under "General"?