I have tried finding a full list of patterns to use for verifying input via HTML5 form verification for various types, specifically url, email, tel and such, but I couldn't find any. Currently, the built-in versions of these input verifications are far from perfect (and tel doesn't even check if the thing you're entering is a phone number). So I was wondering, which patterns could I use for verifying the user is entering the right format in the inputs?

Here are a few examples of cases where the default verification allows input that is not supposed to be allowed:

This field allows emails that have incorrect domains after the @, and it allows addresses to start or end with a dash or period, which isn't allowed either. So, .example-@x is allowed.

This input basically allows any input that starts with http:// (Chrome) and is followed by anything other than a few special characters such as those that have a function in URLs (\, @, #, ~, etc). In FF, all that's checked is if it starts with http:, followed by anything other than : (even just http: is allowed in FF). IE does the same as FF, except that it doesn't disallow http::.

There currently is no built-in verification for phone numbers in any of the major browsers (it functions 100% the same as a type="text", other than telling mobile browsers which kind of keyboard to display.

So, since the browsers don't show a consistent behaviour in each of these cases, and since the behaviour they do show is very basic with many false positives, what can I do to verify my HTML forms (still using HTML5 input verification)?

PS: I'm posting this because I would find it useful to have a complete list of form verification patterns myself, so I figured it might be useful for others too (and of course others can post their solutions too).

These patterns aren't necessarily simple, but here's what I think works best in every situation. Keep in mind that (quite recently) Internationalized Domain Names (IDNs) are available too. With that, an un-testable amount of characters are allowed in URLs (there still exist lots of characters that aren't allowed in domain names, but the list of allowed characters is so big, and will change so often for different Top-Level Domains, that it's not practical to keep up with them). If you want to support the internationalized domain names, you should use the second URL pattern, otherwise, use the first.

Here's a live demo to see the following patterns in action. Scroll down for an explanation, reasoning and analysis of these patterns. 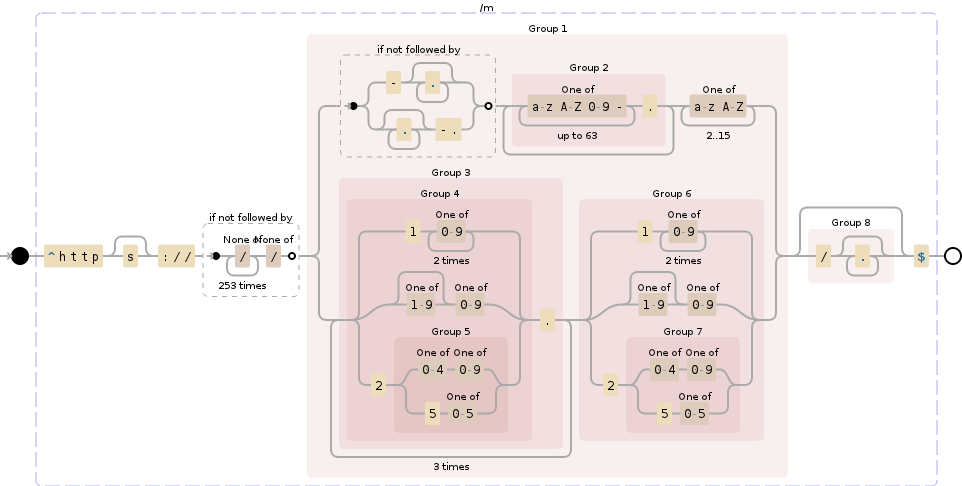 Note that the default http:.* pattern built into modern browsers will always be enforced, so even if you remove the https?:// at the start in this pattern, it will still be enforced. Use type="text" to avoid it.

Since there is a huge amount of characters that are allowed in IDNs, it's not practically possible to list every possible combination in a HTML attribute (you'd get a huge pattern, so in that case it's much better to test it by some other method than regex) [5].

Since email addresses require a whole lot more than this pattern to be 100% foolproof, this will cover the near full 100% of them. A 100% complete pattern does exist, but contains PCRE (PHP)-only regex lookaheads, so it won't work in HTML forms.

This regex is just for 10-digit phone numbers. Since phone number lengths may vary between countries, it's best to use a less strict version of this pattern, or modify it to work for the desired countries. So, this pattern should generally be used as a kind of template pattern.

Yes, I know, I'm very western-centric, but this may be useful too, since it might be difficult to make this too, and in case you're making a site for western people too, this will always work (Asian names have a representation in exactly this format too).

Not the answer you're looking for? Browse other questions tagged regex html forms form-verification or ask your own question.

2966
How do you disable browser autocomplete on web form field / input tags?
3561
How to validate an email address using a regular expression?
639
HTML form readonly SELECT tag/input
2372
How do I give text or an image a transparent background using CSS?
441
Disable validation of HTML5 form elements
976
Using HTML5/Canvas/JavaScript to take in-browser screenshots
2
Zend HTML5 Form element types
281
Number input type that takes only integers?
951
Is there a float input type in HTML5?