How can I use a non-breaking space before an inline-block-default element, such as a <button>?

Here's some example HTML and CSS to show the problem:

Try it out on this JSFiddle, by resizing the output area.

Result (in Chromium on Ubuntu): 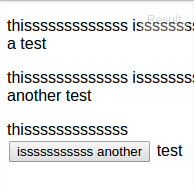 As you can see, there is a line break before the <button> in the third example, which I am trying to avoid. The &nbsp; character seems as if it is being ignored (treated as a regular space). The desired result is that there is no break between "this" and "is," just like the first two examples.

I've already found Why do inline-blocks break after non-breaking space?. An answer there suggests using <nobr> or white-space: nowrap. However:

Why is the problem happening even when setting display: inline;, and how can I solve it without modifying the text itself?

Can you put a span before the nbsp?

21
PHP Parsing Problem - &nbsp; and Â
23
Why do inline-blocks break after non-breaking space?
1
Dont allow a button to break without word

844
CSS 100% height with padding/margin
2897
How can I know which radio button is selected via jQuery?
1014
Tab space instead of multiple non-breaking spaces ("nbsp")?
767
Can I use a :before or :after pseudo-element on an input field?
1720
How can I set the default value for an HTML <select> element?
206
CSS to line break before/after a particular `inline-block` item
1186
How do I remove the space between inline/inline-block elements?
1044
How can I center text (horizontally and vertically) inside a div block?