Is there a way to install cURL in Windows in order to run cURL commands from the command prompt?

If you are not into Cygwin, you can use native Windows builds. Some are here: curl Download Wizard.

Update: Curl is now included in Windows, no need to run it via PowerShell.

First you need to download the cURL executable. For Windows 64bit, download it from here and for Windows 32bit download from here After that, save the curl.exe file on your C: drive.

To use it, just open the command prompt and type in:

If you have Git installed on windows you can use the GNU Bash.... it's built in.

Update: Curl is now included in Windows, no need to run it via PowerShell.

Folks that don't literally need the curl executable, but rather just need to e.g. see or save the results of a GET request now and again, can use powershell directly. From a normal command prompt, type:

which, while a bit wordy, is similar to typing

in a more Unix-ish environment.

UPDATE: I like how ImranHafeez took this one step further in this answer. I'd prefer a simpler cmd-script however, maybe creating a curl.cmd file containing this:

which could be called just like the Unix-ish example above:

If you use the Chocolatey package manager, you can install cURL by running this command from the command line or from PowerShell:

With Windows 10 Insider build 17063 curl is available in the cmd and powershell since early 2018.

Currently in Windows 10 build 17063 and later, cURL comes by default with windows. Then you don't need to download it and just use curl.exe.

p.s. If you want another folder to store executable check your paths > echo %PATH%

Install Git for windows Then use git bash to run curl commands.

Install git command line from here. When you install git in windows you will automatically get curl with it. You can check the installed version of curl using curl --version like this. 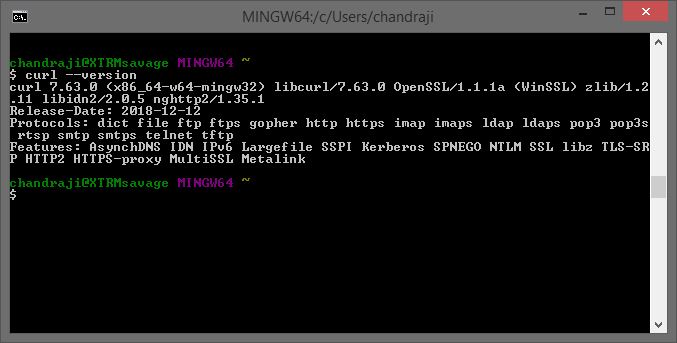 This is a sample curl request which sends a string in a JSON object and get it encoded. 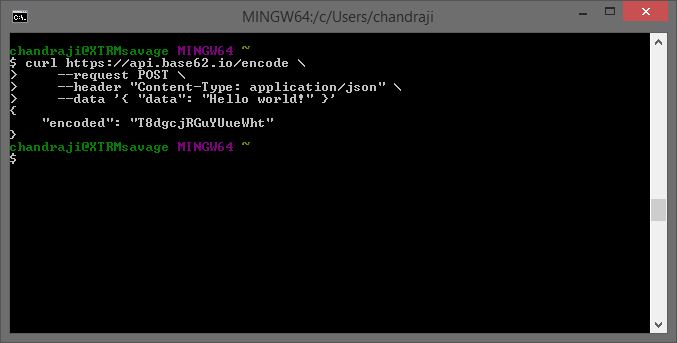 I was able to use this site to easily download and install curl on my Windows machine. It took all of 30 seconds. I'm using Windows 7 (w/ Admin privelages), so I downloaded curl-7.37.0-win64.msi from http://curl.haxx.se/download.html.

Also, don't forget to restart your console/terminal after you install curl, otherwise you will get the same error messages.

I have also found that if I put the cygwin bin on my windows path I can run curl from a windows command line. It also will give you access to things like ls and grep

Assuming you are new to the game or are unable to install software because of security restrictions, you could use Scoop to install curl. From a powershell or command window run the following commands. Note this assumes that you have Powershell v3.0+.

The other cool advantage here is that this installs the software for just the current user.

Download the .exe file from https://cygwin.com/install.html for cygwin (a large collection of GNU and Open Source tools which provide functionality similar to a Linux distribution on Windows).

While installing you will get in a step to select packages. In the select package window --> change the view to "Not installed" and search for curl. click on the necessary packages to install by clicking on the "new" column for the package --> you can see the version number and then click next. ( see the image attached below) 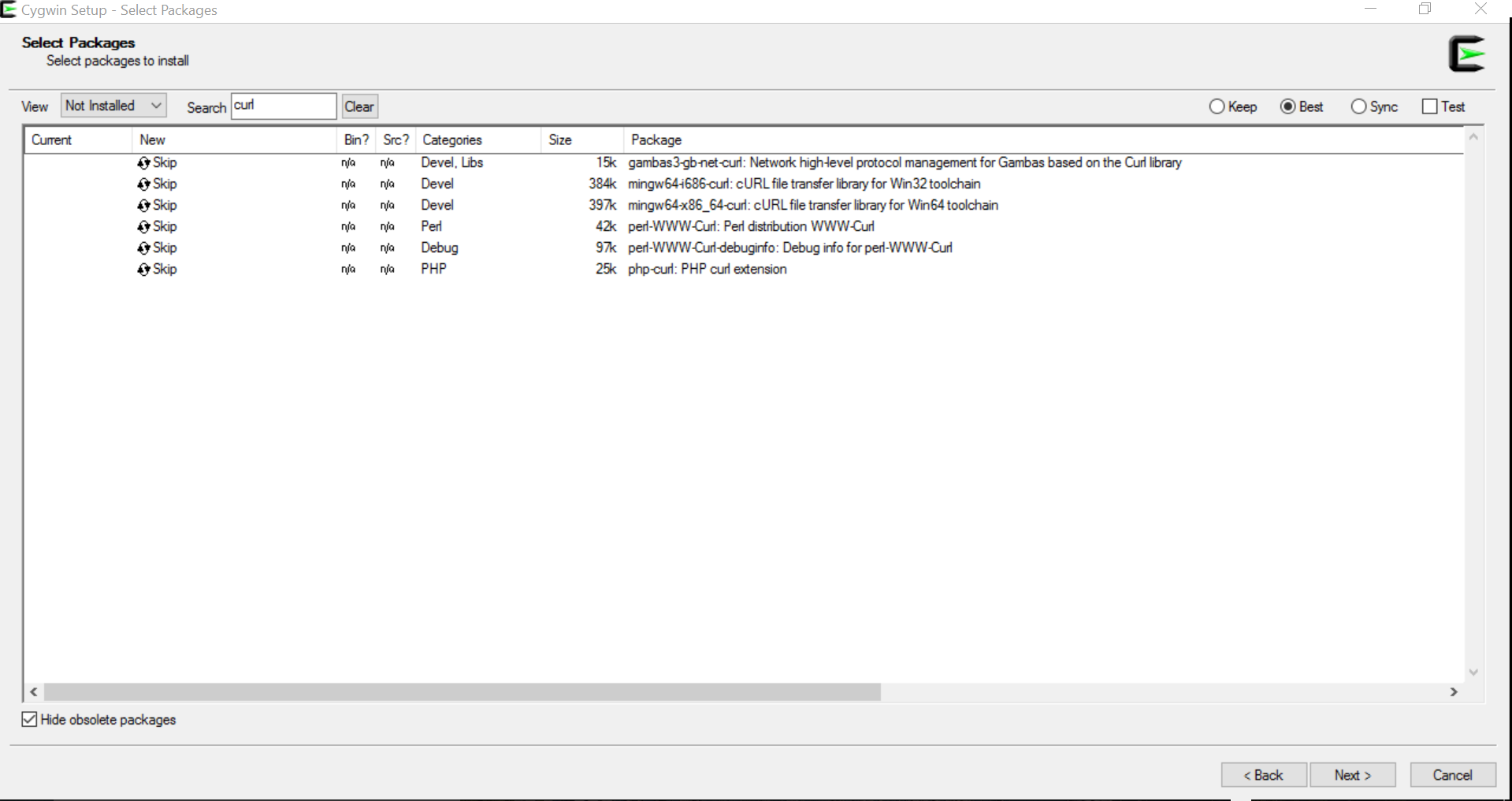 After finishing the installation click on the cygwin to open the curl console on windows and work on curl commands.

I am may be bit late for this, but I am able to resolve my issue of curl at cmd for windows 10.

I got help from below video tutorial https://www.youtube.com/watch?v=qlTVMuONazs

Here is some explanation

Step 3: unzip the download file and install the certificate "ca-bundle.crt" do not touch curl.exe

And you are done.

Don't Forgot to restart you system for one time

(1) Download the curl binary here: https://curl.haxx.se/download.html (see the binary for your OS). Example:

(2) Create a folder "C:\curl" then unzip all there

(3) Edit the system variable called "Path" by adding ";C:\curl\bin" in the end. Finished. 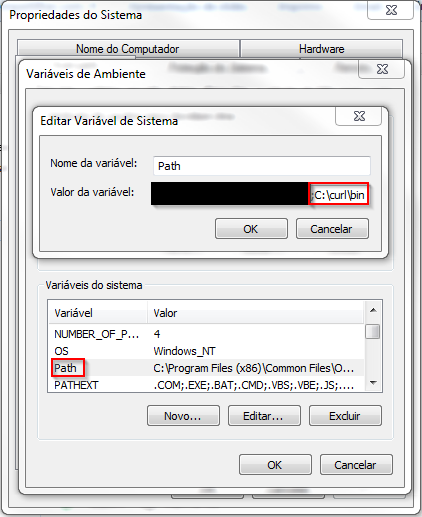 Obs.: I've seen some guys telling to add ";C:\curl" but this way it's not possible to access curl.exe.

For anyone looking for a quick solution, after having standard installed cygwin but finding out curl did not work on a win 10 x64 platform:

Downloading this retired repository, extracting it and running:

Worked like a charm. I assume it has the pre-installed option for curl.

689
How do I install and use cURL on Windows?
30
How can I find the version of php that is running on a distinct domain name?
41
HTTP GET in VBS
42
Curl not recognized as an internal or external command, operable program or batch file
47
How to make an authenticated web request in Powershell?
25
Curl giving "Invalid UTF-8 JSON" error from CouchDb although JSON is fine? Any ideas?
4
curl is not recognized as an internal or external command?
4
In Haskell, how can I write an HTTP client to traverse a website and submit forms?
1
Curl Not a Reconized Command Ruby RVM
2
Recording an internet radio stream using java
See more linked questions

2723
Is there an equivalent of 'which' on the Windows command line?
742
Run Command Prompt Commands
2730
How do I get a YouTube video thumbnail from the YouTube API?
2267
How do I set a variable to the output of a command in Bash?
2711
How do I install pip on Windows?
1106
List all environment variables from the command line
3596
How do I POST JSON data with cURL?
1252
How do I run two commands in one line in Windows CMD?
2620
How do I import an SQL file using the command line in MySQL?