Which version of linux has support for Dolby Advanced Audio v2?

I am using LENEVO G500 Laptop and my sound card has support for Dolby Advanced Audio v2 that works nicely in Windows OS (i.e. Windows 7, 8 and 8.1). However I have failed to enable Dolby sound effect in my Linux OS (have tried it with Linux Mint 17, Fedora 20).

Does anyone have an idea which linux version has support for this feature or how I can enable in a linux OS.

I would appreciate if you could direct me to the right direction.

I've googled out a very good advise on forums that helps me to achieve a Dolby like sound on my Kubuntu 19.04 with Lenovo g780.

Close the dialog and that's it. You can toggle Convolver in PulseEffects on and off while playng music to compare results. You may play with other presets as well.

For improving sound on a notebook or a tablet PulseEffects help pages come with a tuorial about how to achieve this.

App can be minimized to tray on GTK-enabled desktops with an additional application: https://github.com/boomshop/pulseffectstray

It's better enable autostart in app settings (it will copy it's desktop file to ~/.config/autostart with --gapplication-service command line. So next time start without GUI).

It is possible to get reasonably close to the Dolby Advanced Audio output on Linux.

Record the result of playing a -0dBFS impulse in Windows with all effects enabled. Save that as a wav file and use it as input to the PulseEffects Convolver. 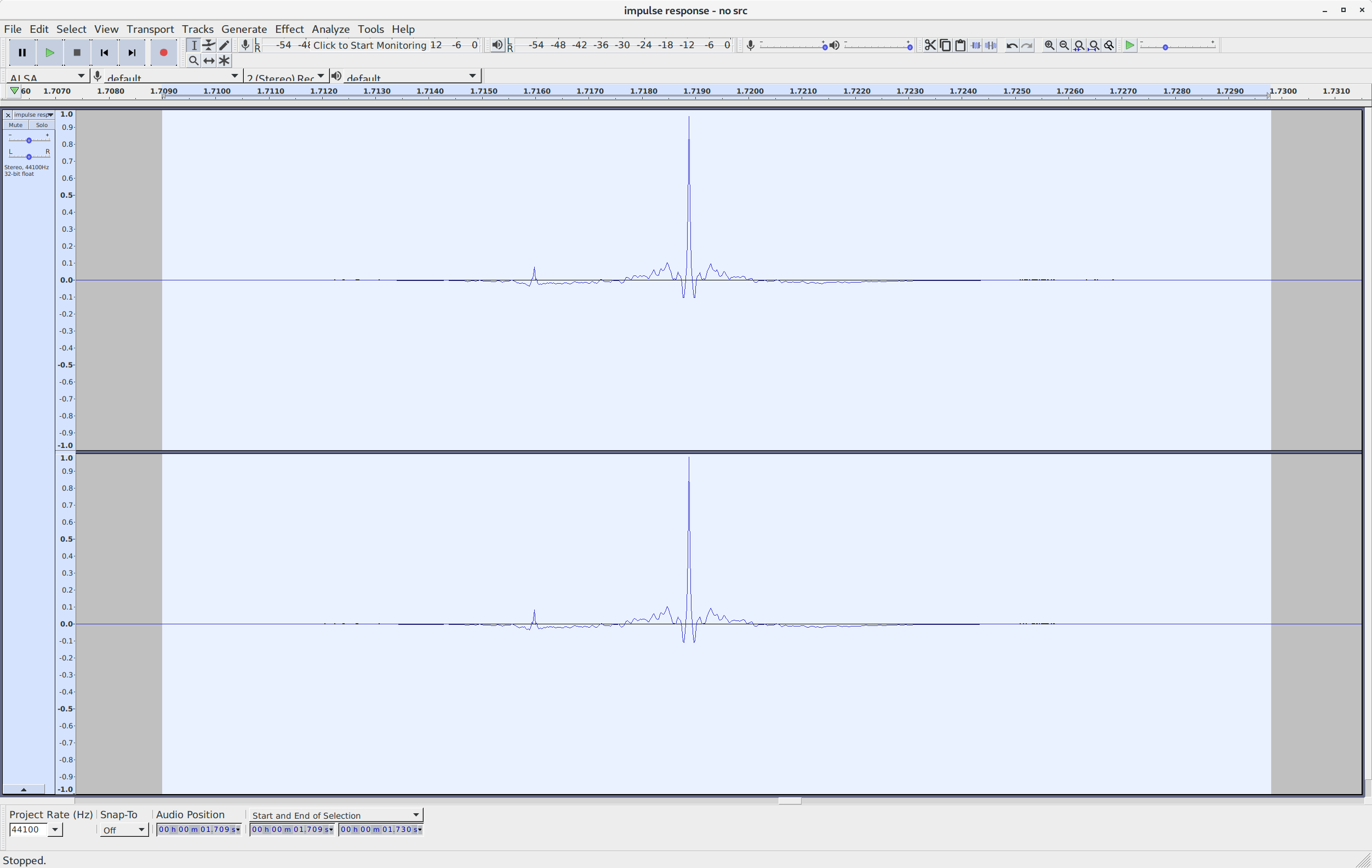 Audacity isn't required, presumably any software capable of recording from the output device will be fine.

To avoid any changes introduced by sample rate conversion, set the sample rate of the output and input devices in Windows to be the same.

When recording, in Step 5, Audacity would not record unless audio was playing. This is probably due to using WASAPI. Just start recording, play the impulse and if you don't see it in the recording output as a single spike, play it again.

The screenshot is quite heavily zoomed in so that you can see the area where there is data. When selecting what to export, try to make sure the selection is roughly centered around the central peak. It doesn't have to be perfect.

As a useful check to make sure what you are recording has been processed by Dolby Advanced Audio, you can disable all effects on the output device in Windows and record the impulse a second time. This should show up as a single peak sample and not the symmetric pattern.

After a bit of research I found this explanation that seems to have satisfied my query. It generally says ...

There isn't going to be an easy fix for this, unless Dolby releases a Linux driver or publishes more information on what exactly their software is doing (which is unlikely).

Beware that recently PulseEffects has changed it's name to EasyEffects, but PulseEffects-Presets hasn't updated it's config files to cover this change; Therefore this answer might not be applicable anymore.

Not the answer you're looking for? Browse other questions tagged linux audio dolby or ask your own question.