I'm looking for an IntelliJ IDEA plugin that would run my tests each time I change my code. I looked for such a solution and I found:

There are lots of ways I could run all my tests (including writing a simple script for this), but I'm looking for a tool that would be smart enough to rerun failed tests first, and that would understand module dependencies (so after a change in some module it would run only tests of dependent modules).

I prefer free options, but if there's something paid for a reasonable price, I would accept it as well.

It's not as intelligent as you would have hoped. It just reruns when it detects changes.

I know this is a 3-year-old question but I think it will help people who face the similar problem in future. So I found out a way to enable SBT style auto test execution in IntelliJ studio.

We need to do 2 things to enable auto test execution. 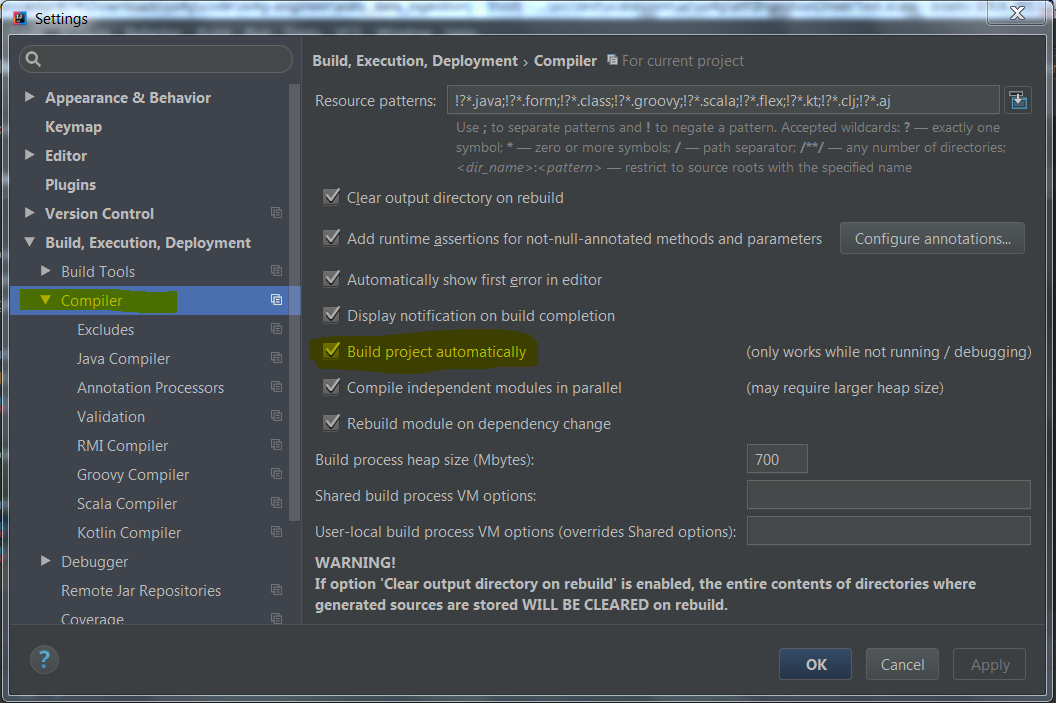 This will start auto testing. Although this works fine, it takes time to build the project even when my project is tiny so for larger projects it will certainly take very long time to complete the build and execute tests.

You can use the Intellij Teamcity plugin. Teamcity is a paid product but there is a free version which gives you 20 projects and 3 agents for free .

Not the answer you're looking for? Browse other questions tagged java intellij-idea tdd continuous-testing or ask your own question.

1346
How can I permanently enable line numbers in IntelliJ?
2682
How do I test a private function or a class that has private methods, fields or inner classes?
1970
How do you assert that a certain exception is thrown in JUnit 4 tests?
715
Correct way to add external jars (lib/*.jar) to an IntelliJ IDEA project
970
Which @NotNull Java annotation should I use?
552
IntelliJ inspection gives “Cannot resolve symbol” but still compiles code
140
How do I share IntelliJ Run/Debug configurations between projects?
2
How does one enable Infinitest on a gradle project in IntelliJ IDEA 15?