I came across PECS (short for Producer extends and Consumer super) while reading up on generics.

Can someone explain to me how to use PECS to resolve confusion between extends and super?

Suppose you have a method that takes as its parameter a collection of things, but you want it to be more flexible than just accepting a Collection<Thing>.

Case 1: You want to go through the collection and do things with each item.
Then the list is a producer, so you should use a Collection<? extends Thing>.

Case 2: You want to add things to the collection.
Then the list is a consumer, so you should use a Collection<? super Thing>.

The reasoning here is that unlike Collection<? extends Thing>, Collection<? super Thing> can always hold a Thing no matter what the actual parameterized type is. Here you don't care what is already in the list as long as it will allow a Thing to be added; this is what ? super Thing guarantees.

The principles behind this in computer science is called

The picture below should explain the concept. Picture courtesy: Andrey Tyukin 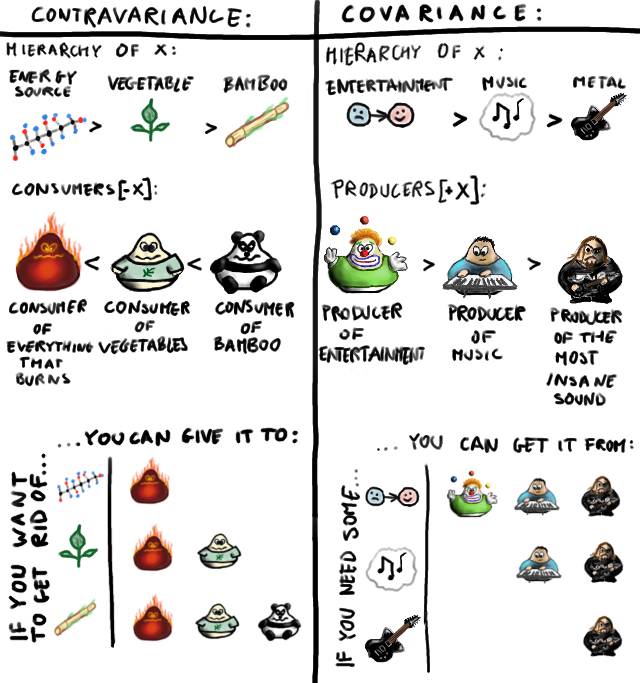 When dealing with collections, a common rule for selecting between upper or lower bounded wildcards is PECS. credit

The Liskov Substitution Principle (LSP) states that “objects in a program should be replaceable with instances of their subtypes without altering the correctness of that program”.

Within the type system of a programming language, a typing rule

bounded(i.e. heading toward somewhere) wildcard : There are 3 different flavours of wildcards:

Note: wildcard ? means zero or one time, represents an unknown type. The wildcard can be used as the type of a parameter, never used as a type argument for a generic method invocation, a generic class instance creation.(i.e. when used wildcard that reference not used in elsewhere in program like we use T)

In a nutshell, three easy rules to remember PECS:

As I explain in my answer to another question, PECS is a mnemonic device created by Josh Bloch to help remember Producer extends, Consumer super.

This means that when a parameterized type being passed to a method will produce instances of T (they will be retrieved from it in some way), ? extends T should be used, since any instance of a subclass of T is also a T.

When a parameterized type being passed to a method will consume instances of T (they will be passed to it to do something), ? super T should be used because an instance of T can legally be passed to any method that accepts some supertype of T. A Comparator<Number> could be used on a Collection<Integer>, for example. ? extends T would not work, because a Comparator<Integer> could not operate on a Collection<Number>.

Note that generally you should only be using ? extends T and ? super T for the parameters of some method. Methods should just use T as the type parameter on a generic return type.

Since you have a list that can be of type A, B or C at runtime, you cannot add any object of type A, B or C in it because you can end up with a combination that is not allowed in java.
In practice, the compiler can indeed see at compiletime that you add a B:

...but it has no way to tell if at runtime, your B will be a subtype or supertype of the list type. At runtime the list type can be any of the types A, B, C. So you cannot end up adding HammerSkark (super type) in a list of DeadHammerShark for example.

In the same hierarchy we can try this:

What and why you can add to this list?

You can add the above types of objects because anything below shark(A,B,C) will always be subtypes of anything above shark (X,Y,Z). Easy to understand.

You cannot add types above Shark, because at runtime the type of added object can be higher in hierarchy than the declared type of the list(X,Y,Z). This is not allowed.

But why you cannot read from this list? (I mean you can get an element out of it, but you cannot assign it to anything other than Object o):

At runtime, the type of list can be any type above A: X, Y, Z, ... The compiler can compile your assignment statement (which seems correct) but, at runtime the type of s (Animal) can be lower in hierarchy than the declared type of the list(which could be Creature, or higher). This is not allowed.

This is the clearest, simplest way for me think of extends vs. super:

I find "PECS" to be a non-obvious way to think of things regarding who is the "producer" and who is the "consumer". "PECS" is defined from the perspective of the data collection itself – the collection "consumes" if objects are being written to it (it is consuming objects from calling code), and it "produces" if objects are being read from it (it is producing objects to some calling code). This is counter to how everything else is named though. Standard Java APIs are named from the perspective of the calling code, not the collection itself. For example, a collection-centric view of java.util.List should have a method named "receive()" instead of "add()" – after all, the calling code adds the element, but the list itself receives the element.

<? super SomeType> is an “undefined(yet)” type, but that undefined type should be a superclass of the ‘SomeType’ class.

If we consider the concept of 'class inheritance' in a Venn diagram, an example would be like this: 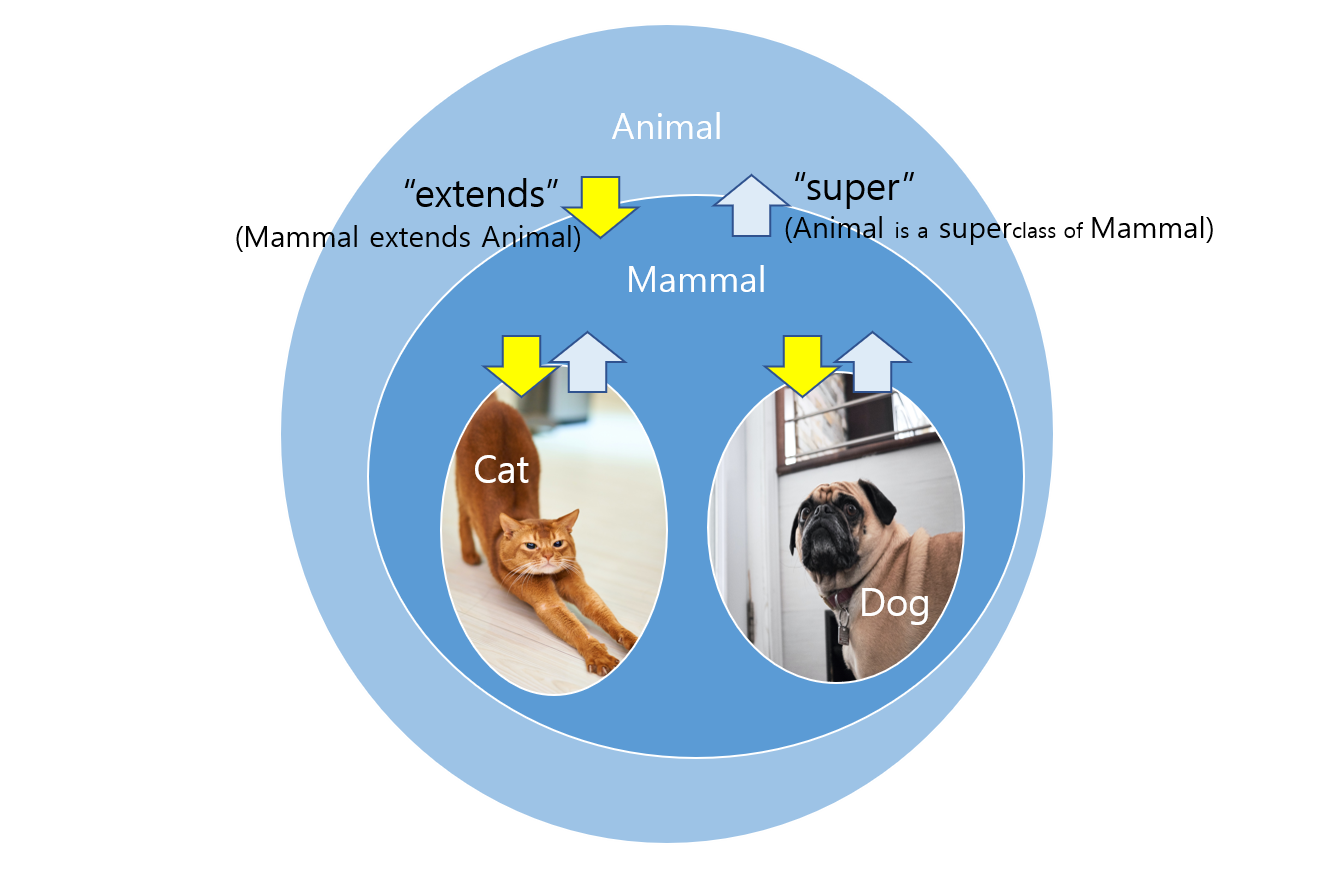 Then, let’s think about the ‘circles’ in the above diagram as a ‘box’ that has a physical volume. 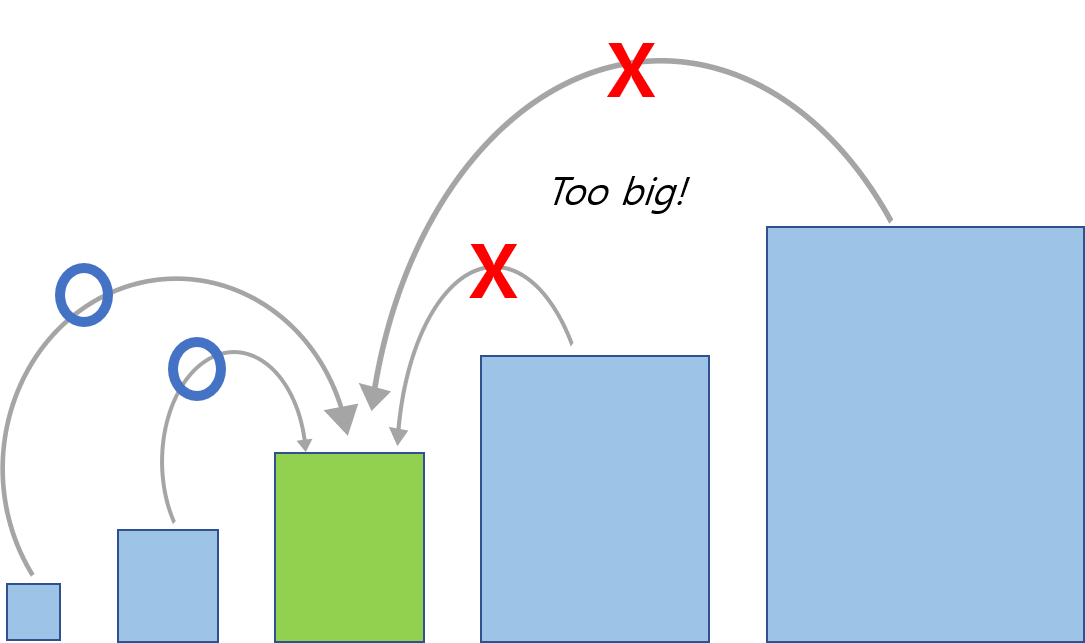 You CAN’T put a bigger box into a smaller one.

You can ONLY put a smaller box into a bigger one.

When you say <? super SomeType>, you wanna describe a ‘box’ that is the same size or bigger than the ‘SomeType’ box.

If you say <? extends SomeType>, then you wanna describe a ‘box’ that is the same size or smaller than the ‘SomeType’ box.

so what is PECS anyway?

An example of a ‘Producer’ is a List which we only read from.

An example of a ‘Consumer’ is a List which we only write into.

Just keep in mind this:

So, we need to read(take) something from a ‘producer’ and put that into our ‘box’. This means that any boxes taken from the producer should NOT be bigger than our ‘box’. That’s why “Producer Extends.”

“Extends” means a smaller box(smaller circle in the Venn diagram above). The boxes of a producer should be smaller than our own box, because we are gonna take those boxes from the producer and put them into our own box. We can’t put anything bigger than our box!

Also, we need to write(put) our own ‘box’ into a ‘consumer’. This means that the boxes of the consumer should NOT be smaller than our own box. That’s why “Consumer Super.”

“Super” means a bigger box(bigger circle in the Venn diagram above). If we want to put our own boxes into a consumer, the boxes of the consumer should be bigger than our box!

Now we can easily understand this example:

In the above example, we want to read(take) something from src and write(put) them into dest. So the src is a “Producer” and its “boxes” should be smaller(more specific) than some type T.

Vice versa, the dest is a “Consumer” and its “boxes” should be bigger(more general) than some type T.

If the “boxes” of the src were bigger than that of the dest, we couldn’t put those big boxes into the smaller boxes the dest has.

If anyone reads this, I hope it helps you better understand “Producer Extends, Consumer Super.”

(adding an answer because never enough examples with Generics wildcards)

The PECS "rule" just ensures that the following is legal:

The typical pairing along the lines of List<? extends T> producer, List<? super T> consumer is simply ensuring that the compiler can enforce the standard "IS-A" inheritance relationship rules. If we could do so legally, it might be simpler to say <T extends ?>, <? extends T> (or better yet in Scala, as you can see above, it's [-T], [+T]. Unfortunately the best we can do is <? super T>, <? extends T>.

When I first encountered this and broke it down in my head the mechanics made sense but the code itself continued to look confusing to me - I kept thinking "it seems like the bounds shouldn't need to be inverted like that" - even though I was clear on the above - that it's simply about guaranteeing compliance with the standard rules of reference.

What helped me was looking at it using ordinary assignment as an analogy.

Illustrating this in terms of the assignment analogy, for consumer the ? wildcard (unknown type) is the reference - the "left hand side" of the assignment - and <? super T> ensures that whatever ? is, T "IS-A" ? - that T can be assigned to it, because ? is a super type (or at most the same type) as T.

For producer the concern is the same it's just inverted: producer's ? wildcard (unknown type) is the referent - the "right hand side" of the assignment - and <? extends T> ensures that whatever ? is, ? "IS-A" T - that it can be assigned to a T, because ? is a sub type (or at least the same type) as T.

Lets take a look at example

Since Java's Collection is a reference type as a result we have next issues:

Solution #1 <? super A> aka lower bound aka contravariance aka consumers guarantees that it is operates by A and all superclasses, that is why it is safe to add

<? extends A> aka upper bound aka covariance aka producers guarantees that it is operates by A and all subclasses, that is why it is safe to get and cast

Let first see what we gain relaxing these restrictions. Lets say we have the following 3 classes:

However this poses the following 2 restrictions:

Here is a simple program to illustrate the relaxation of the type restrictions:

Not the answer you're looking for? Browse other questions tagged java generics super bounded-wildcard pecs or ask your own question.

2449
What is reflection and why is it useful?
4181
What are the differences between a HashMap and a Hashtable in Java?
2203
How do you assert that a certain exception is thrown in JUnit tests?
3526
What is the difference between public, protected, package-private and private in Java?
3312
What is a serialVersionUID and why should I use it?
2306
"implements Runnable" vs "extends Thread" in Java
4
Java generics PECS
4
Why Comparable and Comparator are consumers in PECS wildcard types in Java