I think once we know the answer for question (1), then questions (2) and (3) can be easily explained. So can anyone explain this? Thanks in advance.

A global load refers to a logical memory space. A dram read refers to a transaction on a physical resource. This statement of yours:

is either incorrect or glossing over important details.

Furthermore, the global memory space is not the only memory space. There are other memory spaces, such as local. Transactions to "local" memory can also ultimately be serviced in a variety of ways, one of which would be actually triggering a dram read. Such a transaction would not show up in any "global" metric but would show up in the dram read transaction metric.

I find this diagram/chart in the nsight VSE documentation (and tool help), of the logical and physical arrangement of memory on a GPU to be helpful in inderstanding this. I have excerpted the chart here, and highlighted in red the "links" that correspond to the metrics you identified: 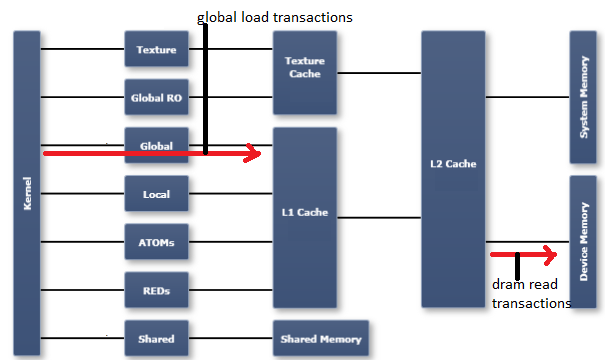 This answer gives a more detailed decoding of the above diagram, for relevant metrics.

Not the answer you're looking for? Browse other questions tagged cuda or ask your own question.

4
nvprof option for bandwidth
3
How are L2 transactions mapped to DRAM in GPUs?