Why 2 GB memory limit when running in 64 bit Windows?

I'm a member in a team that develop a Delphi application. The memory requirements are huge. 500 MB is normal but in some cases it got out of memory exception. The memory allocated in that cases is typically between 1000 - 1700 MB.

We of course want 64-bits compiler but that won't happen now (and if it happens we also must convert to unicode, but that is another story...).

My question is why is there a 2 GB memory limit per process when running in a 64 bit environment. The pointer is 32 bit so I think 4 GB would be the right limit. I use Delphi 2007.

EDIT: So if I set the IMAGE_FILE_LARGE_ADDRESS_AWARE flag in Delphi by using:

And running the resulting Exe-file on a Windows Server 2003 x64 then the application can address 4 GB ?

If you compile the Delphi application using the /LARGEADDRESSAWARE flag, it will be able to address the full 4GB on a 64-bit OS. Otherwise, when running in a WOW32, the OS assumes that the app is expecting the same environment that it would have on a 32-bit OS which means that of the 4GB of address space, 2GB is dedicated for the OS and 2GB is allocated to the application.

The syntax in Delphi to set the LARGEADDRESSAWARE flag in the PE executable is:

Put that in your .dpr file.

As long as you opt into receiving 32-bit pointers with the high-bit set (by including the LARGE_ADDRESS_AWARE PE flag), there is no 2GB limit. 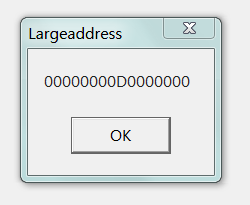 There is no 2GB limit, on 64-bit Windows, as long as you swear you can handle pointers above $7FFFFFFF.

Note: Any code is released into the public domain. No attribution required.

Not the answer you're looking for? Browse other questions tagged delphi delphi-2007 win64 or ask your own question.

13
How can I enable my 32-bit Delphi application to use 4gb of memory on 64-bit windows (via Wow64.exe)?
4
Delphi compiler for 64bit computers
2
Dynamic Array Memory Allocation Strategies
1
What is maximum length for synmemo?

17
How do I get TAnimate's Common AVIs to work on Vista and Win7?
13
How can I enable my 32-bit Delphi application to use 4gb of memory on 64-bit windows (via Wow64.exe)?
5
Problem installing Delphi 2007 on Windows 7 64 Bit Enterprise
3
Find largest free memory block
0
Problems running a 32-bit Delphi app on a 64-bit Windows platform
1
Migrating application from Delphi 7 to Delphi 2007 - problem with dbxint30.dll
8
How to make a exe that is removed from the servers open files list when running (started from a share)
175
The application was unable to start correctly (0xc000007b)
5
Delphi 2007: GlobalMemoryStatus to get total RAM
0
Get available memory for a process