Debugging with Android Studio stuck at "Waiting For Debugger" forever

Whenever I try to use Android Studio's Debug function, the Run status would always stuck at: 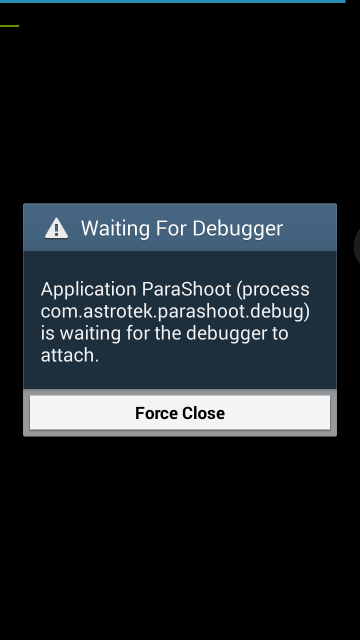 This has being the case from Android Studio 0.8.8 all the way to 1.0. And on the same computer I can perform debugging using Eclipse on the same device without any issues.

So the question is what can I do to make Android Studio debugging work?

Update: The same thing happens when debugging on Nexus 7 (2013) running Android 5.0; and testing on another machine rendered the same result. I can't be the only one encountering this issue :-/

Update: Opened a bounty since this issue is so annoying. Even re-installing the app doesn't solve. Nexus 5 running Cyano, Win7 64. The ADB log is telling:

Also, I can't find an easy way to disconnect nor reset ADB connection in Android Studio.

Obviously is yet another Android Studio, or rather ADB bug.

Just use this command to disable it. adb shell am clear-debug-app

Ensure there is nothing to wait for, by automatic uninstall from Device before each test-run, using Gradle's uninstallAll task, as mentioned in:
stackoverflow.com/Auto uninstall before install?

Restarting Testing device fix the issue for me.

Restarting Android Studio fix the issue for me.

After clicking on the run icon. If it is stuck waiting for a debugger means it is not attached to the app. You have to manually attach by clicking on Attach Debugger to Android process. It is on the right side of the run icon. I had focus this icon in linked image.

Debugger stopped connecting for me today and nothing worked until I tried the following:

This problem occurs when you open more than one instance of Android studio, so you need to attach the debugger manually like mentioned above.

You may need to close other instances of Android studio.

A similar question has been asked recently and the solution may work for some and is very quick.

Both of my dev machines have JDK 8 installed, the debugging function is restored once JDK 7.0.71 was installed and JAVA_HOME environmental variable was set to point to the new JDK.

I tried the top three rated answers but failed. After rebooting my mobile, the problem is solved. No more long "Waiting for Debugger".

I just managed this problem, after several days of trying the above solutions. So I closed the emulator, run AVD manager and in device menu choose - "wipe data" So in next run I was free from stucked debugger.

When the Device displays the message go to Run->Attach debbuger, then select a debbuger. it'll start the activity.

This fixed it for me. Android Studio -> File -> Invalidate Caches & Restart...

I had the same problem. Restart my android phone device worked for me.

This solution works for me:

turning off the USB debugging from my device settings , and then turning it on again.

its Much quicker and easier than restart the device.

How it worked for me.

As for my case, running Android Studio Canary (preview release) along with the stable version was the problem. Running multiple instances of the same Android Studio flavor was OK, but mixing them often resulted in "Waiting For Debugger".

For me, the issue was: The Regional Format of Windows was ARABIC. I simply changed the regional format to English (United States) and the error has fixed. 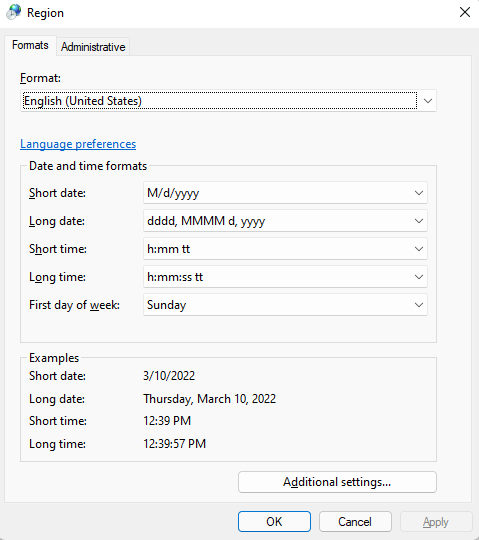 Most of the times this is caused because of the overload of resources and threads over the emulator. Or even for the lock of objects that GC couldn't set free: http://developer.android.com/intl/pt-br/tools/debugging/index.html

Usually, a single restart of it will solve the issue, but sometimes it asks for the IDE restart, so be sure to make both tests.

Another good test is trying to start the app in "Start mode" and then try the debug mode again...

P.S: Don't forget to kill each debug process in the IDE after each test. This will prevent your env to be more overloaded.

Android studio 3.0 and Above 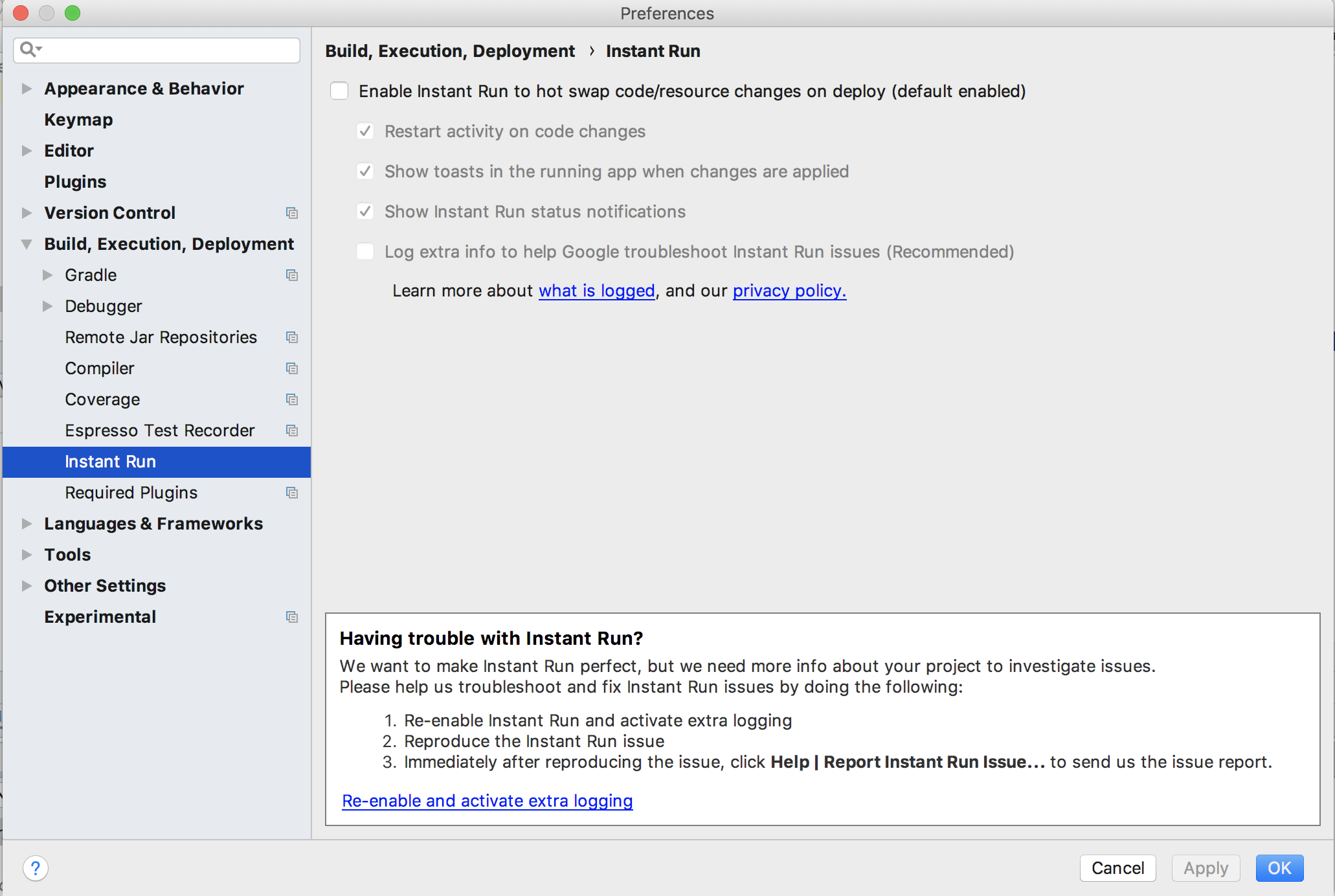 I had the same problem. Restart my android device and closed the adb.exe process. With that I could solve the problem

Well, I guess there is a plethora of circumstances that can trigger this issue. I'm using IntelliJ Idea instead, but it's mostly the same than Android Studio. My solution for this problem:

Right click on the class file that contains the main activity of your project, and then on "Debug 'WhateverActivity'". This will create a new run configuration that should debug fine.

Other solution, without creating a new run configuration:

At least it worked for me. I hope it works for others too.

Non of this solutions worked for me.

Make sure that your Active Build Variant is debug. 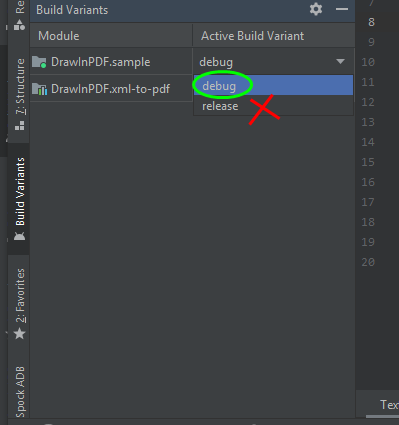 If you also want to make your release variant APK debuggable then make a simple change in app level build.gradle -

This also happens to me from time to time. Problem is that your app / device is configured to wait for debugger. In this case it is waiting for debugger before continuing execution of.

Disable Wait for debugger. You can do this is developer settings. This option needs to be disabled in:

This was tested on Android emulator in android studio. Other phones might have this setting different. If you can not find app's settings in debug, reinstalling app might work too.

For me Run->Attach debugger to Android process was working, but I had to do it every time app was launched.

Fix: There may be a problem with your 'App launch configuration'(To verify this create new project to see if it's working fine). Just delete app configuration, open MainActivity file and Run->Debug (new conffiguration will be created)