What is the daily email limit in Google Apps Script?

Can someone tell me if there is a webpage that lists the official Google limit (Quotas) on emails sent from a Google Apps Script?

In testing my little script I got an error:

Service invoked too many times: email (# 59)

and now I can't send any more emails.

The obvious place for this information would be in the MailApp.sendEmail documentation. But, that does not say anything about a limit.

I found this discussion on the google forum from 2/11/10 where users discuss about a 100 or 500 emails/day limit, with a 24 hour ban, but no one from Google provided an official answer.

Note that this is for Google Apps Script, which is different from the Google App Engine, which does have well published limits.

You can use MailApp.getRemainingDailyQuota() to get an "estimate" of how many more emails to distinct recipients you can send for the day.

I haven't sent any emails today and the function returned 500, so that confirms the daily limit suggested by Joseph. 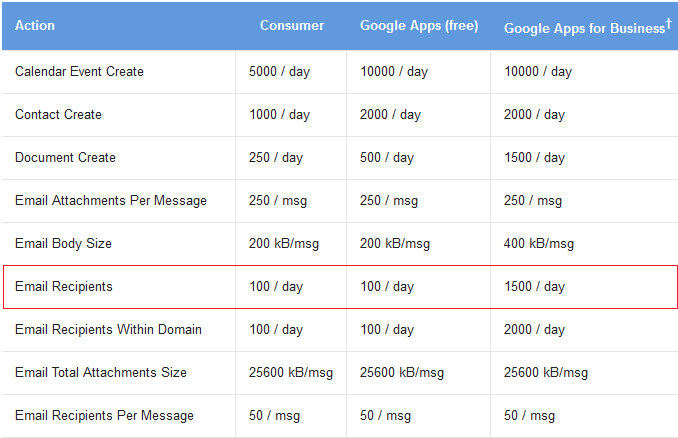 Check https://docs.google.com/macros/dashboard for the latest values as "All quotas are subject to elimination, reduction or change at any time"…

You may be interested in https://docs.google.com/macros/dashboard Here you can see every quota ;)

Assuming that by "Google Apps Script" you are referring to a Google Apps account, then yes there is at http://www.google.com/support/a/bin/answer.py?hl=en&answer=166852. The limit is 500 external recipients per day.

I don't have reference for this but in my experience I always calculate my minimum loop duration by taking the quota and dividing it by the number of seconds in the specified quota limit. So for example if I have a quota that says that I can look at a pretty girl only 86400 times a day then I try to make sure I only look at pretty girls once per second. It's clear to me that Google does not wait for you to reach a daily limit before they act they seem to calculate the rate of change of quota usage and shut you down when you exceed it.

Not the answer you're looking for? Browse other questions tagged email google-apps-script or ask your own question.