Best way to detect that HTML5 <canvas> is not supported

The standard way to deal with situations where the browser does not support the HTML5 <canvas> tag is to embed some fallback content like:

But the rest of the page remains the same, which may be inappropriate or misleading. I'd like some way of detecting canvas non-support so that I can present the rest of my page accordingly. What would you recommend?

This is the technique used in Modernizr and basically every other library that does canvas work:

Since your question was for detection when it's not supported, I recommend using it like so:

There are two popular methods of detecting canvas support in browsers:

My recommendation is a variation of the latter (see Additional Notes), for several reasons:

There are no noticeable benefits to using the first method. Both approaches can be spoofed, but this not likely to happen by accident.

It may still be necessary to check that a 2D context can be retrieved. Reportedly, some mobile browsers can return true for both above checks, but return null for .getContext('2d'). This is why Modernizr also checks the result of .getContext('2d').  However, WebIDL & HTML ― again ― gives us another better, faster option:

Notice that we can skip checking for the canvas element entirely and go straight to checking for 2D rendering support. The CanvasRenderingContext2D interface is also part of the HTML specification.

You must use the getContext approach for detecting WebGL support because, even though the browser may support the WebGLRenderingContext, getContext() may return null if the browser is unable to interface with the GPU due to driver issues and there is no software implementation. In this case, checking for the interface first allows you to skip checking for getContext:

##Performance Comparison Performance of the getContext approach is 85-90% slower in Firefox 11 and Opera 11 and about 55% slower in Chromium 18. 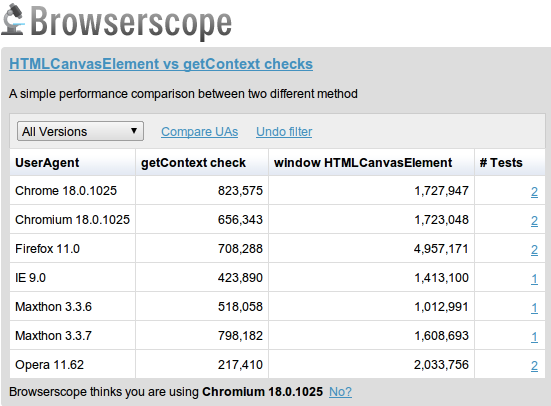 I usually run a check for getContext when I create my canvas object.

If it is supported, then you can continue the canvas setup and add it to the DOM. This is a simple example of Progressive Enhancement, which I (personally) prefer over Graceful Degradation.

Why not try modernizr ? It's a JS library that provides detection capability.

Have you ever wanted to do if-statements in your CSS for the availability of cool features like border-radius? Well, with Modernizr you can accomplish just that!

There may be a gotcha here- some clients do not support all canvas methods.

You can use canisuse.js script to detect if your browsers supports canvas or not

If you're going to get the context of your canvas, you might as well use it as the test:

Not the answer you're looking for? Browse other questions tagged javascript html canvas progressive-enhancement graceful-degradation or ask your own question.

1
How do I detect IE 8 with jQuery now that $.browser is deprecated?
3
How to verify with JavaScript if canvas is supported?
0
What is fallback for HTML5 canvas tag?
0
Modernizr.canvas not seem to be working
22
How to detect HTML 5 compatibility in browser
4
Detecting canvas text API support (Opera Mini)
3
If browser version is older than
1
Determine, the browser supports canvas (paperjs), or not
1
HTML5 canvas.getContext("2d") in sharepoint 2010
-1
Simple script that will swap HTM5 animation for FLASH
See more linked questions