Increase the performance by removing CLEAR ALL

In Matlab 2014b, when I use CLEAR ALL at the beginning of the script I get the following warning,

which is not given in the previous releases (As I recall).

The only reason I found is that, when you call a script from outside or from other scripts you do not want to clear the variables in the workspace, and re-generate them every time again and again.

Is there any other reason that I am missing?

How does removing CLEAR ALL improves the performance when using a single script?

In R2015b, the semantics of clear were changed. Perhaps in response to the concerns raised in this question, the changes stated in the release notes are:

The clear function no longer clears debugging breakpoints. To clear breakpoints, use dbclear all.

The clear function only clears functions that are not currently running. For example, when you call clear myFun while myFun is running, myFun is not cleared.

Here's a table of what gets cleared with each input argument. 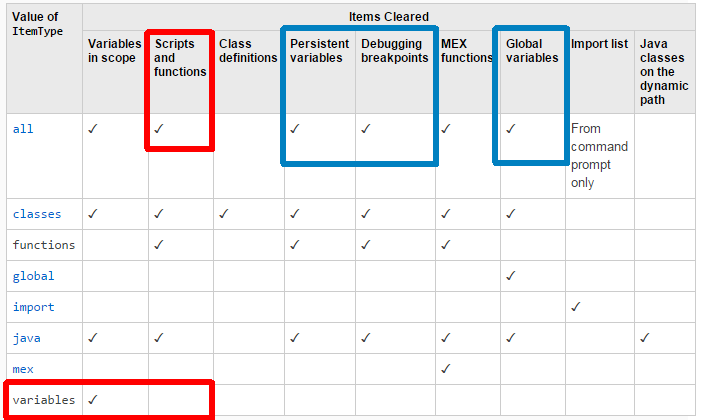 The table for R2015b is identical except that there is no longer a "Debugging breakpoints" column since they are no longer cleared with clear.

Scripts and functions are cleared, when you can probably just clear variables (red boxes). It does not make a lot of sense to clear the function from memory that is presently being executed. (According to R2015b release notes, this does not happen.)

Also, keeping in mind that scripts execute in the base workspace, you are clearing out all functions that may be used by other scripts. Try looking at the output of inmem after an extended MATLAB tinkering session. You fill find all kinds of MATLAB functions that are loaded into memory for fast access (including 'matlabrc', 'pathdef', and other core scripts that setup your workspace). So, perhaps it's not that it hurts performance of just the script where you call clear all but all other scripts and the interactive command line that is in the base workspace. That would be my guess.

Not the answer you're looking for? Browse other questions tagged performance matlab or ask your own question.

1
"Clear all" warning message in Matlab
19
Why does Matlab run faster after a script is "warmed up"?
9
How to declare variables immune to clear all?
1
Is there a way to update the legend as the for goes on?

1879
How to efficiently count the number of keys/properties of an object in JavaScript
3235
Improve INSERT-per-second performance of SQLite
3364
What is the difference between call and apply?
961
Should CSS always precede Javascript?
1632
Why does changing 0.1f to 0 slow down performance by 10x?
691
What is the runtime performance cost of a Docker container?
972
Swift Beta performance: sorting arrays
1584
Replacing a 32-bit loop counter with 64-bit introduces crazy performance deviations with _mm_popcnt_u64 on Intel CPUs