How to let the app know if it's running Unit tests in a pure Swift project?

One annoying thing when running tests in Xcode 6.1 is that the entire app has to run and launch its storyboard and root view controller. In my app this runs some server calls that fetches API data. However, I don't want the app to do this when running its tests.

With preprocessor macros gone, what's the best for my project to be aware that it was launched running tests and not an ordinary launch? I run them normally with command + U and on a bot.

Elvind's answer isn't bad if you want to have what used to be called pure "Logic Tests". If you'd still like to run your containing host application yet conditionally execute or not execute code depending on whether tests are run, you can use the following to detect if a test bundle has been injected:

I used a conditional compilation flag as described in this answer so that the runtime cost is only incurred in debug builds:

I use this in application:didFinishLaunchingWithOptions:

Instead of checking if the tests are running to avoid side-effects, you could run the tests without the host app itself. Go to Project Settings -> select the test target -> General -> Testing -> Host Application -> select 'None'. Just remember to include all files you need to run the tests, as well as libraries normally included by the Host app target.

Other, in my opinion simpler way:

You edit your scheme to pass a boolean value as launch argument to your app. Like this:

All launch arguments are automatically added to your NSUserDefaults.

I believe it's completely legitimate to want to know if you're running inside a test or not. There are numerous reasons why that can be helpful. For example, in running tests, I return early from application-did/will-finish-launching methods in the App Delegate, making the tests start faster for code not germane to my unit test. Yet, I can't go pure "logic" test, for a host of other reasons.

I used to use the excellent technique described by @Michael McGuire above. However, I noticed that stopped working for me around Xcode 6.4/iOS8.4.1 (perhaps it broke sooner).

So, utilizing the approach @Fogmeister suggests, each of my test schemes now sets an environment variable that I can check for. 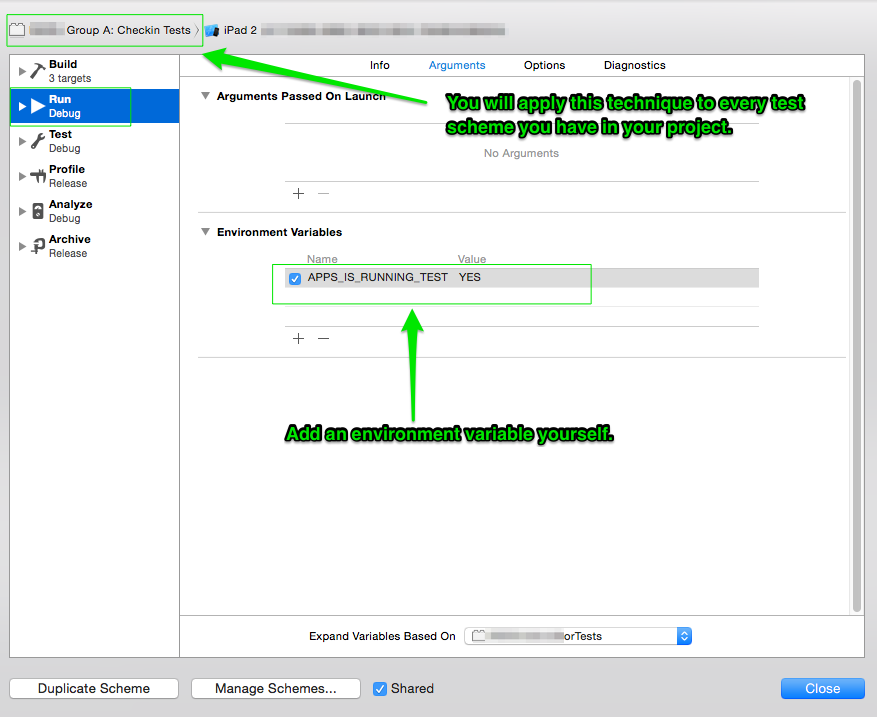 Then, here's some code I have on a class called APPSTargetConfiguration that can answer this simple question for me.

The one caveat with this approach is that if you run a test from your main app scheme, as XCTest will let you do, (that is, not selecting one of your test schemes), you won't get this environment variable set.

This is the swift way to do it.

And this is how you use it:

Here is the full article: https://medium.com/@theinkedengineer/check-if-app-is-running-unit-tests-the-swift-way-b51fbfd07989

(As accepted answer will not help you while developing a framework)

So here is the code:

You can use now

The option is deprecated in Xcode 12.5 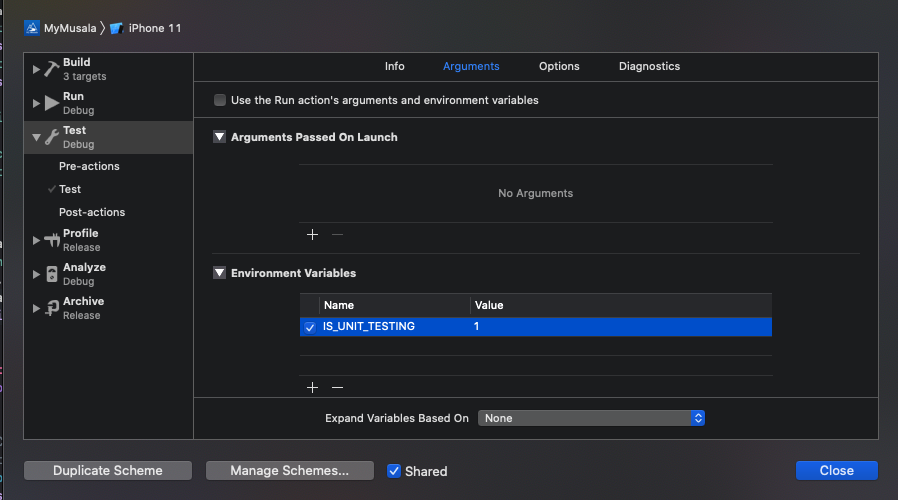 and use that in your code:

Here's a way I've been using in Swift 4 / Xcode 9 for our unit tests. It's based on Jesse's answer.

It's not easy to prevent the storyboard being loaded at all, but if you add this at the beginning of didFinishedLaunching then it makes it very clear to your developers what is going on:

(you obviously shouldn't do anything like this for UI tests where you do want the app to startup as normal!)

You can pass runtime arguments into the app depending on the scheme here... 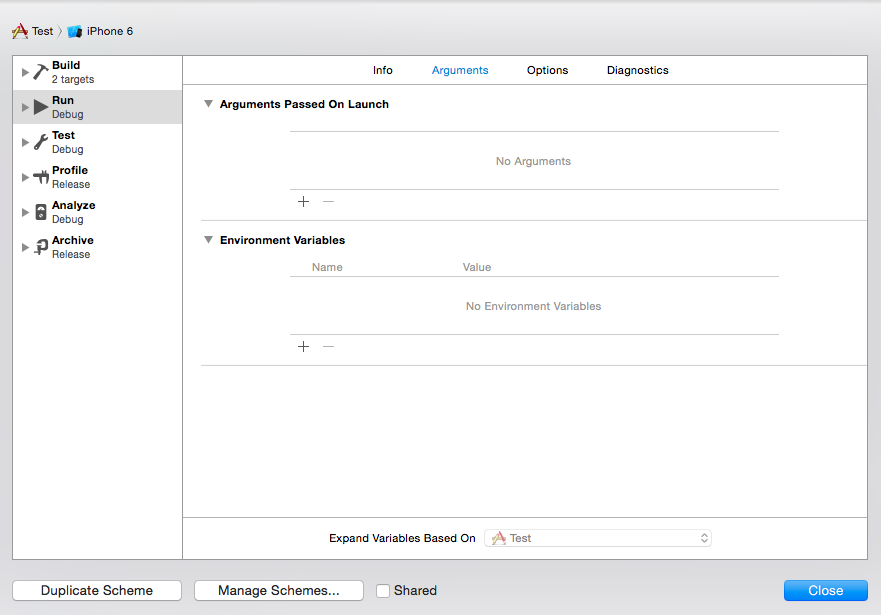 But I'd question whether or not it is actually needed.

The method I had been using stopped working in Xcode 12 beta 1. After trying all of the build based answers to this question, I was inspired by @ODB's answer. Here is a Swift version of a fairly simple solution that works for both Real Devices and Simulators. It should also be fairly "release proof".

Some of these approaches don't work with UITests and if you're basically testing with the app code itself (rather than adding specific code into a UITest target).

I ended up setting an environment variable in the test's setUp method:

Note that this is safe for my testing since I don't currently use any other launchEnvironment values; if you do, you would of course want to copy any existing values first.

Then in my app code, I look for this environment variable if/when I want to exclude some functionality during a test:

Note - thanks for RishiG's comment that gave me this idea; I just expanded that to an example.

Obviously it's no guarantee of stability but being consistent across two major versions is pretty good.

1115
How to change the name of an iOS app?
756
How to link to apps on the app store
360
What is the difference between `let` and `var` in Swift?
470
How do I get a reference to the AppDelegate in Swift?
597
How can I make a weak protocol reference in 'pure' Swift (without @objc)
534
How do I get the App version and build number using Swift?
6
Swift: How should the App Delegate get a reference to the View Controller?
18
XCTests failing to launch app in simulator intermittently
0
XCode: Preprocessor macros from host target not being found in unit tests
1
Xcode 11.4.0 stalling running Unit Tests