The second two are greyed out.

The original code was cloned in Sourcetree from the repo of a previous owner. Not knowing how to move the files into a new repo, I simply copied locally the entire project directory, and started work on them. Then I copied the contents of that reworked project directory into a folder linked to a repo to which others have access. When they clone the repo they get compile errors because modules (the two older repos) are missing.

I have almost no experience of source control and Bitbucket et al, so I humbly ask forgiveness for anything completely stupid that I am doing.

How do I remove those older working copies from Xcode's source control? Or is there some other way that others can then clone and compile the project without errors?

Solved this by deleting xccheckout file under

This had contained references to the previous repos.

I am using Cocoapods and have a .xcworkspace along with my .xcodeproj.

This is what worked for me:

Now if you open the Workspace again, the other Working Copies should no longer exist.

This solution helped me. Go to terminal and paste below code (this will show hidden files) 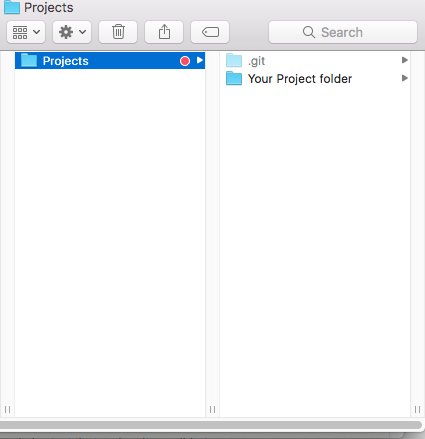 .git file that is located outside project folder do not belong to your working project but other project. ( This is possible if you have made mistake in creating git for other project)

Either cut paste this .git file and save it some other location or you can delete it (if not so important). After deleting , reopen your project in xcode.

If you have Git repositories showing up, then you must have a *.xcscmblueprint file somewhere in your project. For me, it was in my workspace and not in a project. From terminal window:

Edit that file with care to keep just the entry you want. Or perhaps better, just delete the file and add back the repository you want.

Save file and open Xcode again

If this issue happens when using CocoaPods try:

You might have used other project files. (it happens when you drag files to XCode and you forget to checkmark 'copy items if needed').

Not sure what happened here, I had one project but two working copies, similar to question. One of the working copies was synced with a repo on GitHub, and I had successfully pushed changes there. All I had to do, in the end, was to delete my local folder completely, then check out (clone?) from the remote repo on github again.

(I'm not sure but I got the feeling that Xcode and/or the Xcode project was NOT handling multiple working copies, but that this was done like a top layer in the git structure itself. Maybe it is a feature of git?)

I had two instances of the same project in my ProjectNavigator in XCode. One of them was marked with M and the other one with ?

All I had to do to get rid of the copy, was delete the project marked with ? by control-clicking on it and selecting delete.

Open .xcworkspace, worked for me.

Not the answer you're looking for? Browse other questions tagged xcode version-control or ask your own question.