How to create a delay in Swift?

I want to pause my app at a certain in point. In other words, I want my app to execute the code, but then at a certain point, pause for 4 seconds, and then continue on with the rest of the code. How can I do this?

I am using Swift.

Using a dispatch_after block is in most cases better than using sleep(time) as the thread on which the sleep is performed is blocked from doing other work. when using dispatch_after the thread which is worked on does not get blocked so it can do other work in the meantime.
If you are working on the main thread of your application, using sleep(time) is bad for the user experience of your app as the UI is unresponsive during that time.

Dispatch after schedules the execution of a block of code instead of freezing the thread:

Instead of a sleep, which will lock up your program if called from the UI thread, consider using NSTimer or a dispatch timer.

But, if you really need a delay in the current thread:

This uses the sleep function from UNIX.

Comparison between different approaches in swift 3.0

This method does not have a call back. Put codes directly after this line to be executed in 4 seconds. It will stop user from iterating with UI elements like the test button until the time is gone. Although the button is kind of frozen when sleep kicks in, other elements like activity indicator is still spinning without freezing. You cannot trigger this action again during the sleep.

These three methods work similarly, they are all running on the background thread with call backs, just with different syntax and slightly different features.

Dispatch is commonly used to run something on the background thread. It has the callback as part of the function call

Perform is actually a simplified timer. It sets up a timer with the delay, and then trigger the function by selector.

And finally, timer also provides ability to repeat the callback, which is not useful in this case

None of the four method works good enough just by themselves. sleep will disable user interaction, so the screen "freezes"(not actually) and results bad user experience. The other three methods will not freeze the screen, but you can trigger them multiple times, and most of the times, you want to wait until you get the call back before allowing user to make the call again.

So a better design will be using one of the three async methods with screen blocking. When user click on the button, cover the entire screen with some translucent view with a spinning activity indicator on top, telling user that the button click is being handled. Then remove the view and indicator in the call back function, telling user that the the action is properly handled, etc.

You have 4 ways total to delay. Out of these option 1 is preferable to call or execute a function after some time. The sleep() is least case in use.

If you want to call a function after some time to execute something don't use sleep.

I agree with Palle that using dispatch_after is a good choice here. But you probably don't like the GCD calls as they are quite annoying to write. Instead you can add this handy helper:

Now you simply delay your code on a background thread like this:

Delaying code on the main thread is even simpler:

If you prefer a Framework that also has some more handy features then checkout HandySwift. You can add it to your project via SwiftPM then use it exactly like in the examples above:

You can also do this with Swift 3.

The answer by @nneonneo suggested using NSTimer but didn't show how to do it. This is the basic syntax:

Here is a very simple project to show how it might be used. When a button is pressed it starts a timer that will call a function after a delay of half a second.

Using dispatch_time (as in Palle's answer) is another valid option. However, it is hard to cancel. With NSTimer, to cancel a delayed event before it happens, all you need to do is call

Using sleep is not recommended, especially on the main thread, since it stops all the work being done on the thread.

See here for my fuller answer.

Try the following implementation in Swift 3.0

If you need to set a delay of less than a second, it is not necessary to set the .seconds parameter. I hope this is useful to someone.

You can create extension to use delay function easily (Syntax: Swift 4.2+)

How to use in UIViewController

If your code is already running in a background thread, pause the thread using this method in Foundation: Thread.sleep(forTimeInterval:)

(See other answers for suggestions when your code is running on the main thread.)

Using DispatchQueue's .asyncAfter method you can execute code after given time. So, e.g. execute ... on main thread after 1 second looks like this:

Using my handy Delay wrapper struct you can execute it in more fancy way:

As an alternative solution to the previously proposed options, you can use a delay based on the DispatchGroup class, which is designed to synchronise the execution of several asynchronous tasks:

Where the enter() method is used to explicitly indicate that the execution of the group code has begun and wait(timeout:) method to wait for group tasks to complete. Of course, in this example this will never happen, for this a timeout is specified, which is equal to the required delay.

It is convenient to use it as a ready-made helper:

An example of using the DispatchWait:

Unfortunately, I cannot say what is the accuracy of this delay, and what is the probability that the wait(timeout:) method will allow further execution of the program much later than the specified delay.

Also, this solution allows you to delay the code in the current queue, without having to execute it in a separate closure.

I believe the simplest and latest way of doing a 4 seconds timer is: 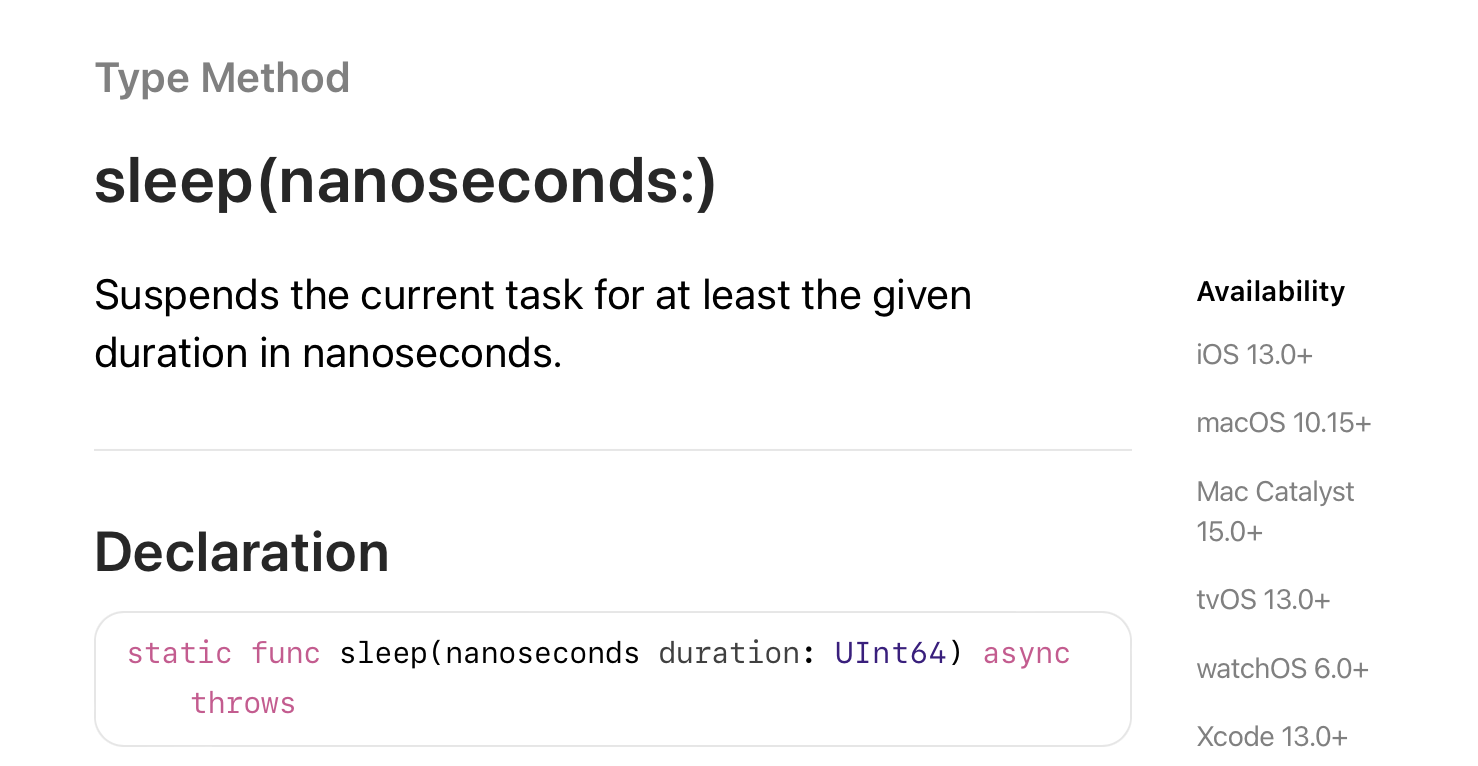 Using Task.sleep will not block any code other than the task at hand, and it's pretty straightforward.

this is the simplest

Not the answer you're looking for? Browse other questions tagged ios swift xcode delay or ask your own question.

577
dispatch_after - GCD in Swift?
276
How can I use Timer (formerly NSTimer) in Swift?
4
How to put delay for each iteration of loop
3
Delay after each animation iteration in Swift
11
UITextView's content getting misplaced with extra space after resizing
1
How to thread sleep in swift on linux
2
How to segue across iOS Navigation Controller programmatically using Swift?
2
Swift iOS how to pause a thread
-2
Wait After While Loop
0
Delay in unit test
See more linked questions

1086
How to change the name of an iOS app?
1767
How can I make a UITextField move up when the keyboard is present - on starting to edit?
877
How to call a method after a delay in Android
1475
Passing data between view controllers
993
#pragma mark in Swift?
591
How can I make a weak protocol reference in 'pure' Swift (without @objc)
968
Swift Beta performance: sorting arrays
505
How do I get the App version and build number using Swift?
390
How to program a delay in Swift 3