Why Android Studio is slowing down when editing xml file or changing the design?

I have a Hp envy notebook with Intel i7 and 8gb ram and 2gb graphics, still sometimes android studio stucks when I am working with xml or design the app. Is there any problem with my laptop or android studio?

It's probably because there's not enough heap memory for AS. You might want to try the first technique mentioned in this blog: Eliminate Lags & Stutters in Android Studio.

Android Studio, like other Java applications, is known for hogging an insane amount of memory while running. Unless enough memory is allocated to the IDE at launch, disk swapping will start kicking in and if you're not using a SSD, God bless you.

Open the file [AS Installation Folder]\bin\studio64.exe.vmoptions or studio.exe.vmoptions, depending on which version you're using.

In it you're likely to find these two lines at the top:

Increase the two values to something reasonable, e.g. -Xms256 and -Xmx1024. You can boost the second value to 2048 if you like; my coworker whose computer has 8G of RAM doesn't find any issue with -Xmx2048 either.

After you're done, restart AS and if you've checked Show memory indicator in Settings/Appearance, you'll see something like this at the bottom-right corner:

One of the reasons developers are still hesistant to ditch Eclipse is because of Gradle. Although it's indeed a nice build system and there are many benefits to using it, even the simplest Gradle calls are pretty slow and time-consuming. As a consequence, our workflow includes a lot of unavoidable waiting, and sometimes we even forget what needs to be tested after AS finishes its laborious building processes. There are a few things we do to boost Gradle's speed.

First, go to Settings/Compiler and check everything, except for the 2nd option Make project automatically. For VM Options, we use these configurations:

Next, add the following lines to gradle.properties in your project directory:

Accelerating the emulator with hardware virtualization

Although the Android emulator is not part of Android Studio, it's well worth mentioning that if you're using one of the newer Intel CPUs which support hardware virtualization, the emulator can be amazingly fast. Check out this article for how to set it up on your machine.

In case anyone else encounters this in the future, I've found that if you click on the little man with the hat at the bottom right, enable "Power Saving Mode" and switch down Highlighting level to "None", it reduces the XML editing lag in complex layouts. 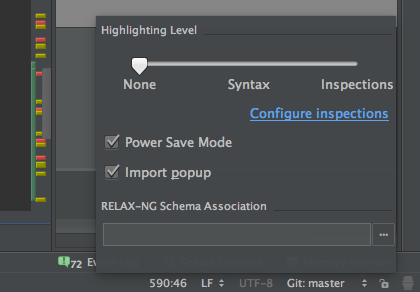 Once you make the edit, you can disable Power Saving and slide highlighting back up to see the changes in Preview.

Not ideal, but it prevents the constant pauses between keypresses whilst editing.

You can try increasing heap memory to see if it could help by following the instruction here. http://tools.android.com/tech-docs/configuration

As of Android Studio 2.0, you can create/edit this file by accessing the "Edit Custom VM Options" file from the Help menu.

Increasing IDE Memory By default, the IDE is assigned a maximum of 750 MB. If you have a large project, or if you have a lot of RAM on your system, the IDE will run better if you increase the amount of memory it is allowed to use. To do that, create your own studio.vmoptions override (in the location explained above) and add a line like this 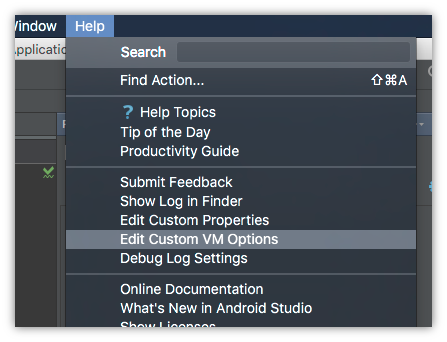 While the Android Studio is running go to task manager --> processes and check how much physical memory it is using. If it is using full heap size memory then try increasing the heap size.

My studio64.exe.vmoptions file, add some heap wish to have some help.

BTW, most cost is at the CPU and memory. Graphics Card is none of business.

Not the answer you're looking for? Browse other questions tagged android performance android-layout android-studio or ask your own question.

3232
Improve INSERT-per-second performance of SQLite
1232
Is quitting an application frowned upon?
1417
Is there a way to get the source code from an APK file?
1630
Why does changing 0.1f to 0 slow down performance by 10x?
1532
Where to place the 'assets' folder in Android Studio?
1167
You need to use a Theme.AppCompat theme (or descendant) with this activity
685
Error in launching AVD with AMD processor
657
How to get the SHA-1 fingerprint certificate in Android Studio for debug mode?
803
Error retrieving parent for item: No resource found that matches the given name after upgrading to AppCompat v23