What FFT descriptors should be used as feature to implement classification or clustering algorithm?

But I'm not sure using what descriptor as frequency domain based feature, since there are amplitude spectrum, power spectrum and phase spectrum of a signal and I've read some references but still got confused about the significance. And what distance (similarity) function should be used as measurement when performing learning algorithms on frequency domain based feature vector(Euclidean distance? Cosine distance? Gaussian function? Chi-kernel or something else?)

Hope someone give me a clue or some material that I can refer to, thanks~

Thanks to @DrKoch, I chose a spatial element with the largest L-1 norm and plotted its log power spectrum in python and it did show some prominent peaks, below is my code and the figure 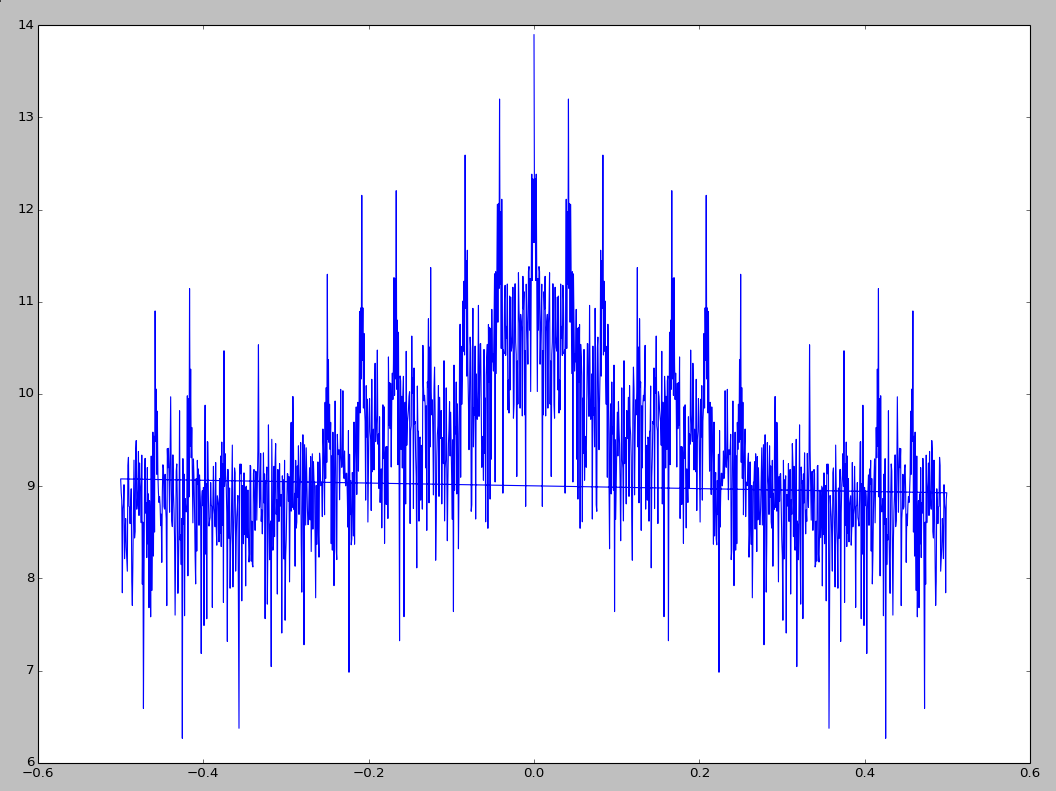 And I have several trivial questions to ask to make sure I totally understand your suggestion: 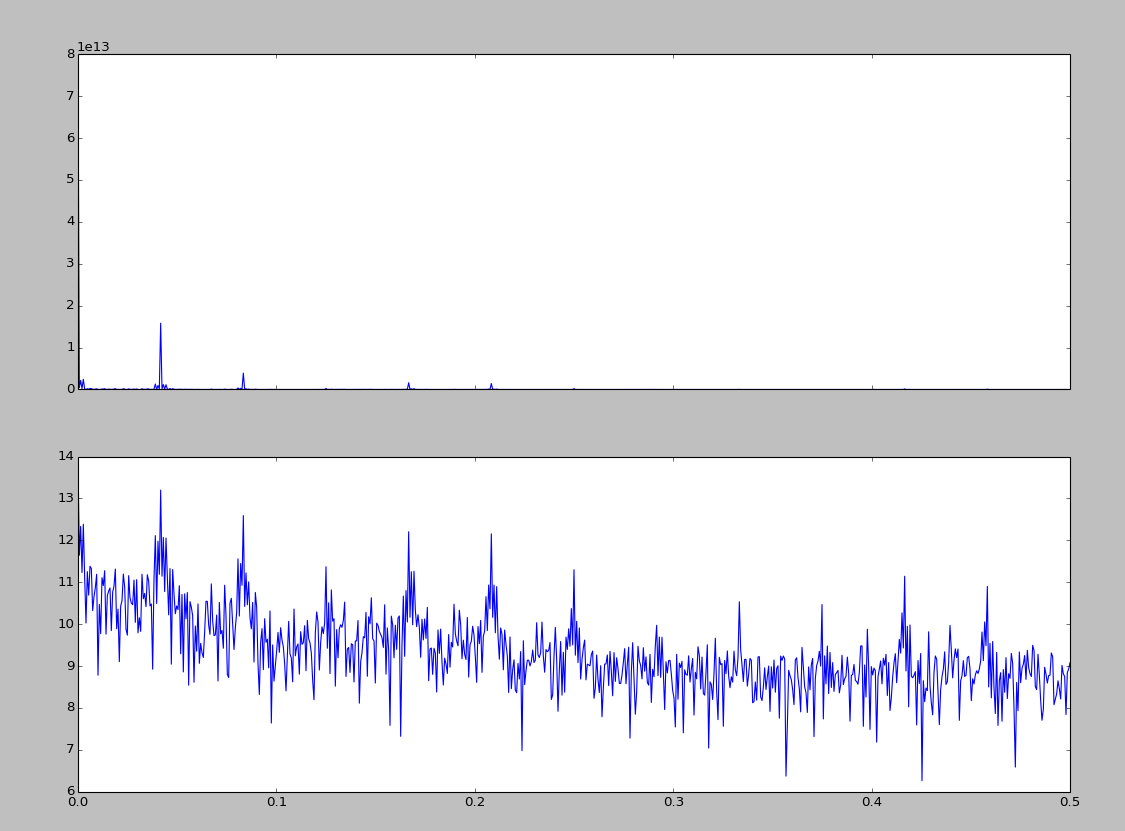 Please correct me if I'm wrong:

I think I should keep the last four peaks in first figure with power = np.abs(sp) ** 2 and power[power < threshold] = 0 because the log power spectrum reduces the difference among each component. And then use the log spectrum of new power as feature vector to feed classifiers.

I also see some reference suggest applying a window function (e.g. Hamming window) before doing fft to avoid spectral leakage. My raw data is sampled every 5 ~ 15 seconds and I've applied a histogram on sampling time, is that method equivalent to apply a window function or I still need apply it on the histogram data?

Generally you should extract just a small number of "Features" out of the complete FFT spectrum.

First: Use the log power spec. Complex numbers and Phase are useless in these circumstances, because they depend on where you start/stop your data acquisiton (among many other things)

Second: you will see a "Noise Level" e.g. most values are below a certain threshold, ignore all these values.

Third: If you are lucky, e.g. your data has some harmonic content (cycles, repetitions) you will see a few prominent Peaks.

If there are clear peaks, it is even easier to detect the noise: Everything between the peaks should be considered noise.

Now you may search for the two, three largest peaks and use their location and probably widths as "Features" for further classification.

Location is the x-value of the peak i.e. the 'frequency'. It says something how "fast" your cycles are in the input data.

If your cycles don't have constant frequency during the measuring intervall (or you use a window before caclculating the FFT), the peak will be broader than one bin. So this widths of the peak says something about the 'stability' of your cycles.

Based on this: Two patterns are similar if the biggest peaks of both hava a similar frequency and a similar widths, and so on.

Very intersiting to see a logarithmic power spectrum of one of your examples.

Now its clear that your input contains a single harmonic (periodic, oscillating) component with a frequency (repetition rate, cycle-duration) of about f0=0.04. (This is relative frquency, proprtional to the your sampling frequency, the inverse of the time beetween individual measurment points)

Its is not a pute sine-wave, but some "interesting" waveform. Such waveforms produce peaks at 1*f0, 2*f0, 3*f0 and so on. (So using an FFT for further analysis turns out to be very good idea)

At this point you should produce spectra of several measurements and see what makes a similar measurement and how differ different measurements. What are the "important" features to distinguish your mesurements? Thinks to look out for:

If your most important feature is absoulute amplitude, you're better off with calculating the RMS (root mean square) level of our input signal.

If pitch is important, you're better off with calculationg the ACF (auto-correlation function) of your input signal.

Don't focus on the leftmost peaks, these come from the high frequency components in your input and tend to vary as much as the noise floor.

There are several popular windows which mark different choices of an unavoidable trade-off: Precision of a single peak vs. level of sidelobes:

You chose a "rectangular window" (equivalent to no window at all, just start/stop your measurement). This gives excellent precission of your peaks which now have a width of just one sample. Your sidelobes (the small peaks left and right of your main peaks) are at -21dB, very tolerable given your input data. In your case this is an excellent choice.

A Hanning window is a single cosine wave. It makes your peaks slightly broader but reduces side-lobe levels.

The Hammimg-Window (cosine-wave, slightly raised above 0.0) produces even broader peaks, but supresses side-lobes by -42 dB. This is a good choice if you expect further weak (but important) components between your main peaks or generally if you have complicated signals like speech, music and so on.

Correct scaling of a spectrum is a complicated thing, because the values of the FFT lines depend on may things like sampling rate, lenght of FFT, window, and even implementation details of the FFT algorithm (there exist several different accepted conventions).

After all, the FFT should show the underlying conservation of energy. The RMS of the input signal should be the same as the RMS (Energy) of the spectrum.

Not the answer you're looking for? Browse other questions tagged machine-learning fft data-mining similarity feature-extraction or ask your own question.

570
What is the difference between a generative and a discriminative algorithm?
8
How to resample/rebin a spectrum?
1
Getting Data back from Filtered FFT
3
FFT: Match samples to frequency
2
Power spectrum of real data with fftpack on log axis
1
Strange FFT spectrum from a near perfect sinusoid
0
How to Extract the following Frequency-domain Features in Python?