What is the endianness of binary literals in C++14?

I have tried searching around but have not been able to find much about binary literals and endianness. Are binary literals little-endian, big-endian or something else (such as matching the target platform)?

As an example, what is the decimal value of 0b0111? Is it 7? Platform specific? Something else? Edit: I picked a bad value of 7 since it is represented within one byte. The question has been sufficiently answered despite this fact.

Some background: Basically I'm trying to figure out what the value of the least significant bits are, and masking it with binary literals seemed like a good way to go... but only if there is some guarantee about endianness.

Short answer: there isn't one. Write the number the way you would write it on paper.

Long answer: Endianness is never exposed directly in the code unless you really try to get it out (such as using pointer tricks). 0b0111 is 7, it's the same rules as hex, writing

doesn't mean 0x77AA on some platforms because that would be absurd. Where would the extra 0s that are missing go anyway with 32-bit ints? Would they get padded on the front, then the whole thing flipped to 0x77AA0000, or would they get added after? I have no idea what someone would expect if that were the case.

The point is that C++ doesn't make any assumptions about the endianness of the machine*, if you write code using primitives and the literals it provides, the behavior will be the same from machine to machine (unless you start circumventing the type system, which you may need to do).

There seems to be a misunderstanding here about what endianness is. Endianness refers to how bytes are ordered in memory and how they must be interpretted. If I gave you the number "4172" and said "if this is four-thousand one-hundred seventy-two, what is the endianness" you can't really give an answer because the question doesn't make sense. (some argue that the largest digit on the left means big endian, but without memory addresses the question of endianness is not answerable or relevant). This is just a number, there are no bytes to interpret, there are no memory addresses. Assuming 4 byte integer representation, the bytes that correspond to it are:

so, given either of those and told "this is the computer's internal representation of 4172" you could determine if its little or big endian.

So now consider your binary literal 0b0111 these 4 bits represent one nybble, and can be stored as either

Endianness is not about individual bits. Given that a byte is 8 bits, if I hand you 0b00000111 and say "is this little or big endian?" again you can't say because you only have one byte (and no addresses). Endianness doesn't pertain to the order of bits in a byte, it refers to the ordering of entire bytes with respect to address(unless of course you have one-bit bytes).

You don't have to care about what your computer is using internally. 0b0111 just saves you the time from having to write stuff like

Without needing to comment explaining the significance of the number.

* In c++20 you can check the endianness using std::endian.

All integer literals, including binary ones are interpreted in the same way as we normally read numbers (left most digit being most significant).

The C++ standard guarantees the same interpretation of literals without having to be concerned with the specific environment you're on. Thus, you don't have to concern yourself with endianness in this context.

Your example of 0b0111 is always equal to seven.

The C++ standard doesn't use terms of endianness in regards to number literals. Rather, it simply describes that literals have a consistent interpretation, and that the interpretation is the one you would expect.

Wikipedia describes what endianness is, and uses our number system as an example to understand big-endian.

The terms endian and endianness refer to the convention used to interpret the bytes making up a data word when those bytes are stored in computer memory.

An example on endianness is to think of how a decimal number is written and read in place-value notation. Assuming a writing system where numbers are written left to right, the leftmost position is analogous to the smallest address of memory used, and rightmost position the largest. For example, the number one hundred twenty three is written 1 2 3, with the hundreds place left-most. Anyone who reads this number also knows that the leftmost digit has the biggest place value. This is an example of a big-endian convention followed in daily life.

In this context, we are considering a digit of an integer literal to be a "byte of a word", and the word to be the literal itself. Also, the left-most character in a literal is considered to have the smallest address.

This consideration allows us to understand endianness in the context of the C++ language, and shows that integer literals are similar to "big-endian".

You're missing the distinction between endianness as written in the source code and endianness as represented in the object code. The answer for each is unsurprising: source-code literals are bigendian because that's how humans read them, in object code they're written however the target reads them.

Since a byte is by definition the smallest unit of memory access I don't believe it would be possible to even ascribe an endianness to any internal representation of bits in a byte -- the only way to discover endianness for larger numbers (whether intentionally or by surprise) is by accessing them from storage piecewise, and the byte is by definition the smallest accessible storage unit.

The C/C++ languages don't care about endianness of multi-byte integers. C/C++ compilers do. Compilers parse your source code and generate machine code for the specific target platform. The compiler, in general, stores integer literals the same way it stores an integer; such that the target CPU's instructions will directly support reading and writing them in memory.

The compiler takes care of the differences between target platforms so you don't have to.

The only time you need to worry about endianness is when you are sharing binary values with other systems that have different byte ordering.Then you would read the binary data in, byte by byte, and arrange the bytes in memory in the correct order for the system that your code is running on.

One picture is sometimes more than thousand words. 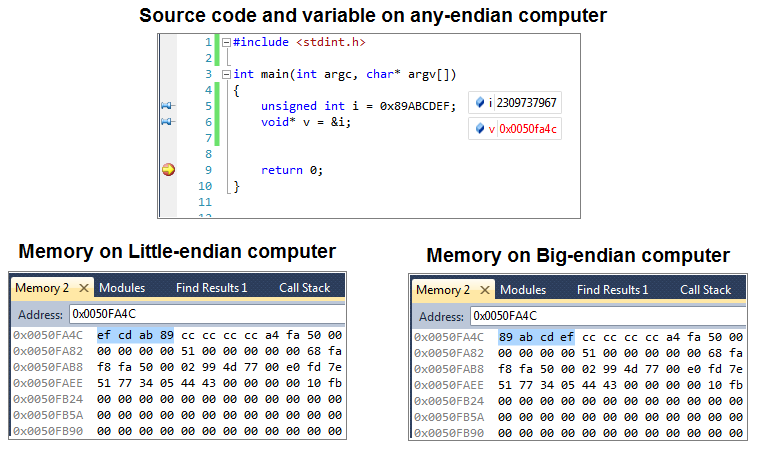 What people mean when they talk about “endianness” is the order of bytes in that object representation. For example, if you declare unsigned char int_bytes[sizeof(int)] = {1}; and int i; then memcpy( &i, int_bytes, sizeof(i)); do you get 0x01, 0x01000000, 0x0100, 0x0100000000000000, or something else? The answer is: yes. There are real-world implementations that produce each of these results, and they all conform to the standard. The reason for this is so the compiler can use the native format of the CPU.

This comes up most often when a program needs to send or receive data over the Internet, where all the standards define that data should be transmitted in big-endian order, on a little-endian CPU like the x86. Some network libraries therefore specify whether particular arguments and fields of structures should be stored in host or network byte order.

The language lets you shoot yourself in the foot by twiddling the bits of an object representation arbitrarily, but it might get you a trap representation, which could cause undefined behavior if you try to use it later. (This could mean, for example, rewriting a virtual function table to inject arbitrary code.) The <type_traits> header has several templates to test whether it is safe to do things with an object representation. You can copy one object over another of the same type with memcpy( &dest, &src, sizeof(dest) ) if that type is_trivially_copyable. You can make a copy to correctly-aligned uninitialized memory if it is_trivially_move_constructible. You can test whether two objects of the same type are identical with memcmp( &a, &b, sizeof(a) ) and correctly hash an object by applying a hash function to the bytes in its object representation if the type has_unique_object_representations. An integral type has no trap representations, and so on. For the most part, though, if you’re doing operations on object representations where endianness matters, you’re telling the compiler to assume you know what you’re doing and your code will not be portable.

As others have mentioned, binary literals are written with the most-significant-digit first, like decimal, octal or hexidecimal literals. This is different from endianness and will not affect whether you need to call ntohs() on the port number from a TCP header read in from the Internet.

You might want to think about C or C++ or any other language as being intrinsically little endian (think about how the bitwise operators work). If the underlying HW is big endian, the compiler ensures that the data is stored in big endian (ditto for other endianness) however your bit wise operations work as if the data is little endian. Thing to remember is that as far as the language is concerned, data is in little endian. Endianness related problems arise when you cast the data from one type to the other. As long as you don't do that you are good.

I was questioned about the statement "C/C++ language as being intrinsically little endian", as such I am providing an example which many knows how it works but well here I go.

Output on a little endian system:

Output on a big endian system:

So, if you do not know the processor's endianness, where does everything come out right? in the little endian system! Thus, I say that the C/C++ language is intrinsically little endian.

Not the answer you're looking for? Browse other questions tagged c++ endianness c++14 or ask your own question.

-3
Why does assigning a hex value give big indian equivalent value on a little indian machine?