Apple says there are optimisations behind the scene on array copies. Looks like sometimes - not always - structures are actually copied or not.

1) is == iterating over all the array to perform a element-based comparison ? (looks like it) -> How about performance / memory usage on very large arrays then ?

2) Are we sure == will ever return true if all elements are equal ? I have bad memories of == on Java Strings

3) Is there a way to check if myArray1 and myArray2 are technically using the same "memory location" / pointer / etc. ? i'm after understanding how the optimisation works and potential caveats.

You’re right to be slightly nervous about ==:

Why? Swift arrays do not conform to Equatable, but they do have an == operator, defined in the standard library as:

This operator loops over the elements in lhs and rhs, comparing the values at each position. It does not do a bitwise compare – it calls the == operator on each pair of elements. That means if you write a custom == for your element, it’ll get called.

But it contains an optimization – if the underlying buffers for the two arrays are the same, it doesn’t bother, it just returns true (they contain identical elements, of course they’re equal!).

This issue is entirely the fault of the NeverEqual equality operator. Equality should be transitive, symmetric and reflexive, and this one isn't reflexive (x == x is false). But it could still catch you unawares.

Swift arrays are copy-on-write – so when you write var x = y it doesn’t actually make a copy of the array, it just points x’s storage buffer pointer at y’s. Only if x or y are mutated later does it then make a copy of the buffer, so that the unchanged variable is unaffected. This is critical for arrays to behave like value types but still be performant.

In early versions of Swift, you actually could call === on arrays (also in early versions, the mutating behaviour was a bit different, if you mutated x, y would also change even though it had been declared with let – which freaked people out so they changed it).

You can kinda reproduce the old behaviour of === on arrays with this (very implementation-dependent not to be relied-on except for poking and prodding investigations) trick:

== in Swift is the same as Java's equals(), it compares values.

In Swift you can compare array content values as easy as this:

But this will not work if you want to compare references:

For compare arrays of custom objects we can use elementsEqual.

Arrays conform to Equatable in Swift 4.1, negating the caveats mentioned in previous answers. This is available in Xcode 9.3.

But just because they implemented == did not mean Array or Optional conformed to Equatable. Since these types can store non-equatable types, we needed to be able to express that they are equatable only when storing an equatable type.

This meant these == operators had a big limitation: they couldn’t be used two levels deep.

With conditional conformance, we can now fix this. It allows us to write that these types conform to Equatable—using the already-defined == operator—if the types they are based on are equatable.

If you have an array of custom objects, one has to be careful with the equality test, at least with Swift 4.1:
If the custom object is not a subclass of NSObject, the comparison uses the static func == (lhs: Nsobject, rhs: Nsobject) -> Bool, which has to be defined.
If it is a subclass of NSObject, it uses the func isEqual(_ object: Any?) -> Bool, which has to be overridden.

Please check the following code, and set breakpoints at all return statements.

They can be compared with:

Whereas comparing arrays in swift, must be clear what are the comparison entities. 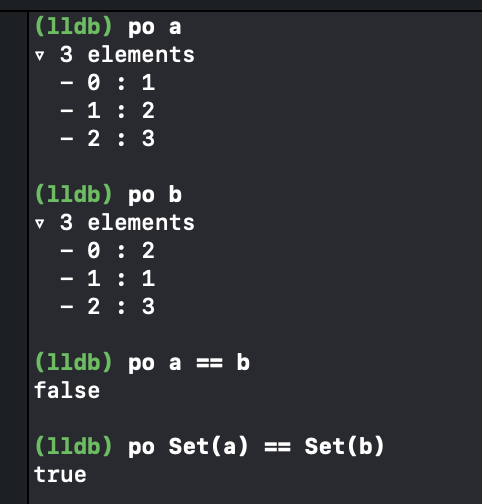 "Set operations are not limited to use with other sets. Instead, you can perform set operations with another set, an array, or any other sequence type."

Use the “equal to” operator (==) to test whether two sets contain > the same elements. https://developer.apple.com/documentation/swift/set