I have next userform developed in vba, which takes info from a worksheet for displaying info

I want to order all the info aphabetically by a Segment, this is the code:

how to make it ordered by 'AD' (SEGMENTO) column???

You can sort your Excel Worksheet in ascending order using VBA statement like the following:

Note: in the column range Columns("A:XFD") instead of XFD enter the last used column pertinent to your case, e.g. Columns("A:DD").

Hope this will help.

To sort a data table, use Excel Names in conjunction with the CurrentRegion function. This is less risky than hard-coding column references and can be done in two simple steps.

The reason it's preferable to specifying columns is that if you get the columns wrong or they change later, you'll scramble your data! When you perform the sort, the cells in any omitted column(s) will remain where they are, becoming part of the wrong rows. And this is exactly what will happen if you add further columns later, unless you remember to update your VBA.

Here are the two simple steps for using this approach. For this example, I've chosen a data table with four columns and four rows:

We are going to sort by COL3 descending. The cells in the other three columns share identical values, enabling us to readily verify they all stay with the correct rows.

Step 1: choose a cell in the data table that's unlikely to ever be removed, such as the header of a column you intend to make permanent, and define a Name for this cell. You can define the name by selecting the cell and typing directly in Excel's Name dropdown above the worksheet. Here I've used the name RegionTag: 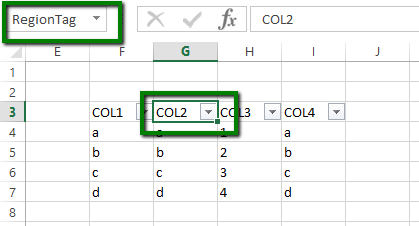 Straight away, CurrentRegion can reference the whole data table just from this. You can see it in action if you code a line of VBA to select the table:

This is the result: 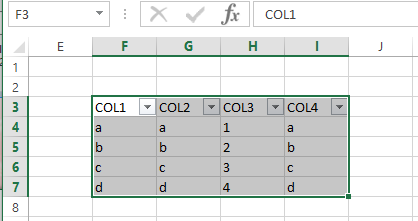 That's just for illustration, showing the power of the Name/CurrentRegion combination. We don't need to select the table in order to sort it.

Step 2: define a second Name, this time for the column you want to sort by: 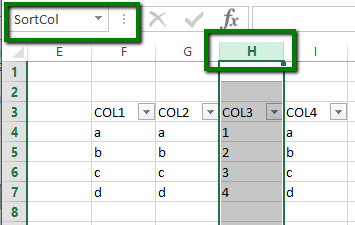 Make sure the Name refers to the entire column, selected by clicking the column header, rather than just a range of cells in the column.

That's it! With these two Names defined, we can sort the data table without concerning ourselves with its rows and columns, even if more are added later:

Here is our data table sorted using the above statement:

Not the answer you're looking for? Browse other questions tagged vba sorting excel worksheet-function or ask your own question.

591
Stop Excel from automatically converting certain text values to dates
528
How to convert a column number (e.g. 127) into an Excel column (e.g. AA)
1601
Sorting an array of objects by property values
548
Is there a way to crack the password on an Excel VBA Project?
897
Sorting object property by values
459
Sorting arrays in NumPy by column
521
Sorting list based on values from another list
606
How to avoid using Select in Excel VBA
1
Public variable value is not reset