Using ReSharper 8.2 I get a warning ("Expression is always false") for the null check in

from NHibernate NullableDictionary. Why is this? When I try it with

then I don't get the warning for null checks on T variables as expected.

Edit: To make things easier here is the class signature of the linked source:

It's occurring because the class implements IDictionary<TKey, TValue>; the warning disappears if you (temporarily) delete the interface portion of the class signature.

Since the "key" in the standard System.Collections.Generic.Dictionary class can never be null (it throws an ArgumentNullException), I'd say ReSharper is making an incorrect assumption.

I tested the class in an otherwise empty project and tried it out. Although ReSharper grayed out all the code, it definitely still executed at runtime.

The gray text indicates ReSharper believes the logic will always drop through to the else block, but that's clearly not the case when you use it. 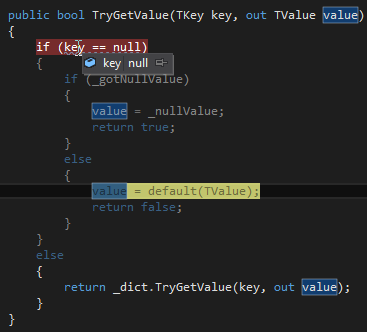 To get around the issue of ReSharper assuming by default that the key cannot be null, you could use the JetBrains Annotations.

Add a reference to the JetBrains Annotations assembly. For me, this was the location:

Then add a using directive to the top of the file where the class is:

Now mark that parameter with the CanBeNull attribute and you'll see ReSharper no longer grays out the text: 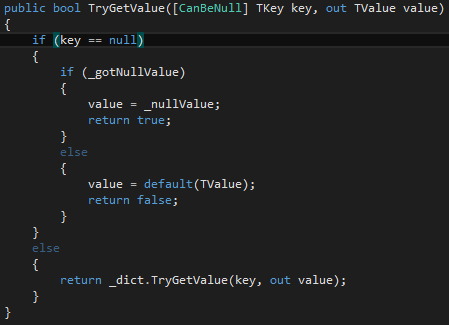 Not the answer you're looking for? Browse other questions tagged c# generics resharper or ask your own question.

1590
Type Checking: typeof, GetType, or is?
1667
How do I remedy “The breakpoint will not currently be hit. No symbols have been loaded for this document.” warning?
558
Curious null-coalescing operator custom implicit conversion behaviour
0
Does ReSharper warn about dictionary keys?
262
ReSharper warns: “Static field in generic type”
0
PropertyInfo.GetValue returned object is not seen as null by visual studio / resharper
3
C# and ReSharper: Checking an object's type
3
Why does ReSharper think MailMessage.From cannot be null?
4
Resharper claims expression is always false using LINQ Aggregate with seed
0
ReSharper (false?) JavaScript warnings