I've looked around and haven't found anything relevant. I'm tyring to create a shader to give a texture smoke effect animation like here:

Not asking for a complete/full solution (although that would be awesome) but any pointers towards where I can get started to achieve this effect. Would i need to have the vertices for the drawing or is this possible if I have the texture only?

Modelling smoke with a fluid simulation isn't simple and can be very slow for a detailed simulation. Using noise to add finer details can be a fair bit faster. If this is the direction you want to head in, this answer has some good links to the little grasshopper. If you have a texture, use it to initialize the smoke density (or spawn particles for that matter) and run the simulation. If you start with vector data, and want the animation to trail along the curve as in your example it gets more complex. Perhaps draw the curve over the top of the smoke simulation, gradually drawing less of it and drawing the erased bits as density into the simulation. Spawning particles along its length and using "noise based particles" as linked above sounds like a good alternative too.

Still, it sounds like you're after something a bit simpler. I've created a short demo on shadertoy, just using perlin noise for animated turbulence on a texture. It doesn't require any intermediate texture storage or state information other than a global time. 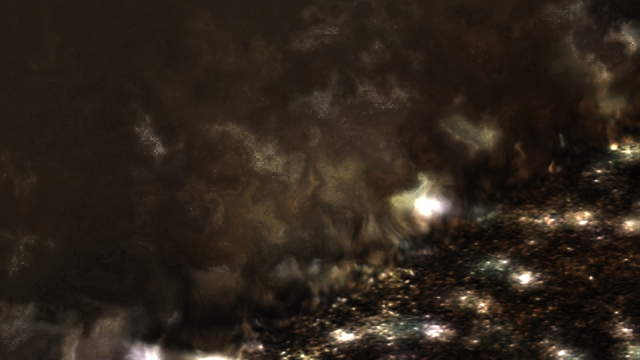 The idea started with trying to create streaks of smoke that blur and grow with time. Start with a curve, sum/average colour along it and then make it longer to make the smoke appear to move. Rather than add points to the curve over time to make it longer, the curve has a fixed number of points and their distance increases with time.

To create a random curve, perlin noise is sampled recursively, providing offsets to each point in turn. 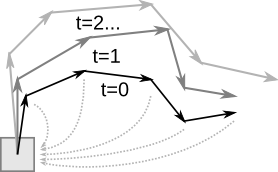 Using mipmapping, the samples towards the end of the curve can cover a larger area and make the smoke appear to blur into nothing, just as your image does. However, since this is a gather operation the end of the smoke curve is actually the start (hence the steps-i below).

As always with these effects, you can spend hours playing with constants getting it to look that tiny bit better. I've used a linearly changing value for the mipmap bias as the second argument to texCol(), which I'm sure could be improved. Also averaging a number of smoke() calls with varying o will give a smoother result.

[EDIT] If you want the smoke to animate along a curve with this method, I'd use a second texture that stores a "time offset" to delay the simulation for certain pixels. Then draw the curve with a gradient along it so the end of the curve will take a little while to start animating. Since it's a gather operation you should draw a much fatter lines into this time offset texture as it's the pixels around them which will gather colour. Unfortunately this will break when parts of the curve are too close or intersect.

In the example pictured it appears as if they have the vertices. Possibly the "drawing" of the flower shape was recorded and then played back continuously. Then the effect hits the vertices based on a time offset from when they were drawn. The effect there appears to mostly be a motion blur.

So to replicate this effect you would need the vertices. See how the top of the flower starts to disappear before the bottom? If you look closely you'll see that actually the blur effect timing follows the path of the flower around counter clockwise. Even on the first frame of your gif you can see that the end of the flower shape is a brighter yellow than the beginning.

The angle of the motion blur also appears to change over time from being more left oriented to being more up oriented.

And the brightness of the segment is also changing over time starting with the yellowish color and ending either black or transparent.

If you are wanting this effect on a bitmapped texture instead of a line object that's also doable, although the approach would be different.

Let's start with the line object and assume you have the vertices. The way I would approach it is that I would add a percentage of decay as an attribute to the vertex data. Then each frame that you render you'd first update the decay percentage based on the time for that vertex. Stagger them slightly.

Then the shader would draw the line segment using a motion blur shader where the amount of motion blur, the angle of the blur, and the color of the segment are controlled by a varying variable that is assigned by the decay attribute. I haven't tested this shader. Treat it like pseudocode. But I'd approach it this way... Vertex Shader:

Of course the trick is in varying the decay amount per vertex based on a slight offset in time.

If you want to do the same with a sprite you're going to do something very similar except that the difference between the decay per vertex would have to be played with to get right as there are only 4 vertices.

Sorry... The above shader blurs the incoming texture. It doesn't necessarily blur the color of the line being drawn. This might or might not be what you want to do. But again without knowing more of what you are actually trying to accomplish it's difficult to give you a perfect answer. I get the feeling you'd rather do this on a sprite anyway than a line vertex based object. So no you can't copy and paste this shader in to your code as is. But it shows the concept of how you'd do what you're looking to do. Especially if you're doing it on a texture instead of on a vertex based line.

On second look it might be particle based. If it is they again have all the vertices but as particle locations. I sort of prefer the idea that it's line segments because I don't see any gaps. So if it is particles there are a lot and they're tightly placed. The particles are still decaying cascading from the top petal around to the last. Even if it's line segments you could treat the vertices as particles to apply the wind and gravity.

As for how the smoke effect works check out this helper app by 71 squared: https://71squared.com/particledesigner

The way it works is that you buy the Mac app to use to design and save your particle. Then you go to their github and get the iOS code. But this particular code creates a particle emitter. Doing a shape out of particles would be different code. But the evolution of the particles is the same.

OpenGL ES suggests that your target platform may not have the computional power to do a real smoke simulation (and if it does, it would consume quite a bit of power, which is undesirable on a device like a phone).

However, your target device will definitively have the power to create a fake texture-space effect which looks good enough to be convincing.

First look at the animation you posted. The flower is blurring and fading, there is a sideway motion to the left ("wind") and an upwards motion of the smoke. Thus, what is primarily needed is ping-ponging between two textures, sampling for each fragment at the fragment's location offset by a vector pointing downwards and right (you only have gather available, not scatter).
No texelFetchOffset or such function in ES 2.0 so you'll have to use plain old texture2D and do the vector add yourself, but that shouldn't be a lot of trouble. Note that since you need to use texture2D anyway you'll not need to worry about gl_FragCoord either. Have the interpolator give you the correct texture coordinate (simply set texcoord of vertices of the quad to 0 on one end, and to 1 on the other end).

To get the blur effect, randomize the offset vector (e.g. by adding another random vector with a much smaller magnitude, so the "overall direction" remains the same), to get the fade effect either multiply alpha with an attenuation factor (such as 0.95) or do the same with the color (which will give you "black" rather than "transparent", but depending on wheter or not you want premultiplied alpha, that may be the correct thing).

Alternatively you could implement the blur and fade effect by generating mipmaps first (gradually fade them to transparent), and using the optional bias value in texture2D, slightly increasing the bias as time progresses. That will be, yet lower quality (possibly with visible box artefacts), but it allows you to preprocess much of the calculation ahead of time and has a much more cache-friendly access pattern.

Not the answer you're looking for? Browse other questions tagged opengl-es glsl opengl-es-2.0 or ask your own question.

8
particle system for cloud or smoke
-1
What did google play music use to create the "particles" visualiser on their website?

226
How to debug a GLSL shader?
6
Full screen background texture with OpenGL performance issue (iPad)
7
GLSL shader that scroll texture
5
GLSL shader for each situation
5
Optimizing performance of a heavy fragment shader
2
How to rotate around x and y in OpenGL ES 1.1?
1
Sending data to the shader(GLSL) is failing when I change a line of code in the shader that has nothing to do with those uniforms
0
Which GLSL Multi Colour Linear/Radial Gradients Strategy to use?
0
Three.js custom Shader with Texture