How do I debug "Error: spawn ENOENT" on node.js?

When I get the following error:

Author note: Lots of issues with this error encouraged me to post this question for future references.

I found a particular easy way to get the idea of the root cause of:

The problem of this error is, there is really little information in the error message to tell you where the call site is, i.e. which executable/command is not found, especially when you have a large code base where there are a lot of spawn calls. On the other hand, if we know the exact command that cause the error then we can follow @laconbass' answer to fix the problem.

I found a very easy way to spot which command cause the problem rather than adding event listeners everywhere in your code as suggested in @laconbass' answer. The key idea is to wrap the original spawn call with a wrapper which prints the arguments send to the spawn call.

Here is the wrapper function, put it at the top of the index.js or whatever your server's starting script.

Then the next time you run your application, before the uncaught exception's message you will see something like that:

In this way you can easily know which command actually is executed and then you can find out why nodejs cannot find the executable to fix the problem.

Launches a new process with the given command, with command line arguments in args. If omitted, args defaults to an empty Array.

The third argument is used to specify additional options, which defaults to:

Use env to specify environment variables that will be visible to the new process, the default is process.env.

Ensure you are not putting any command line arguments in command and the whole spawn call is valid. Proceed to next step.

Step 2: Identify the Event Emitter that emits the error event

Search on your source code for each call to spawn, or child_process.spawn, i.e.

and attach there an event listener for the 'error' event, so you get noticed the exact Event Emitter that is throwing it as 'Unhandled'. After debugging, that handler can be removed.

Execute and you should get the file path and line number where your 'error' listener was registered. Something like:

If the first two lines are still

do this step again until they are not. You must identify the listener that emits the error before going on next step.

There are two possible scenarios:

In both scenarios, you must inspect the PATH key on the environment object that the spawned child process will use.

The absence of PATH (i.e., it's undefined) will cause spawn to emit the ENOENT error, as it will not be possible to locate any command unless it's an absolute path to the executable file.

When PATH is correctly set, proceed to next step. It should be a directory, or a list of directories. Last case is the usual.

Step 4: Ensure command exists on a directory of those defined in PATH

Spawn may emit the ENOENT error if the filename command (i.e, 'some-command') does not exist in at least one of the directories defined on PATH.

Locate the exact place of command. On most linux distributions, this can be done from a terminal with the which command. It will tell you the absolute path to the executable file (like above), or tell if it's not found.

miss-installed programs are the most common cause for a not found command. Refer to each command documentation if needed and install it.

When command is a simple script file ensure it's accessible from a directory on the PATH. If it's not, either move it to one or make a link to it.

Once you determine PATH is correctly set and command is accessible from it, you should be able to spawn your child process without spawn ENOENT being thrown.

As @DanielImfeld pointed it, ENOENT will be thrown if you specify "cwd" in the options, but the given directory does not exist.

Windows solution: Replace spawn with node-cross-spawn. For instance like this at the beginning of your app.js:

@laconbass's answer helped me and is probably most correct.

I came here because I was using spawn incorrectly. As a simple example:

however, I recommend doing it this way:

this is because then the cp.on('exit', fn) event will always fire, as long as bash is installed, otherwise, the cp.on('error', fn) event might fire first, if we use it the first way, if we launch 'npm' directly.

For anyone who might stumble upon this, if all the other answers do not help and you are on Windows, know that there is currently a big issue with spawn on Windows and the PATHEXT environment variable that can cause certain calls to spawn to not work depending on how the target command is installed.

How to research the spawn call raising the error:

There are 2 posible origins for ENOENT:

When origin is code you depend on, usual cause is an Environment Issue (or windows quirk)

In my case, I was getting this error thrown due to the necessary dependent system resources not being installed.

More specifically, I have a NodeJS app that is utilizing ImageMagick. Despite having the npm package installed, the core Linux ImageMagick was not installed. I did an apt-get to install ImageMagick and after that all worked great!

Before anyone spends to much time debugging this problem, most of the time it can be resolved by deleting node_modules and reinstalling the packages.

respectivly. if not then

Are you changing the env option?

Then look at this answer.

This was the fix for me:

In case you're experiencing this issue with an application whose source you cannot modify consider invoking it with the environment variable NODE_DEBUG set to child_process, e.g. NODE_DEBUG=child_process yarn test. This will provide you with information which command lines have been invoked in which directory and usually the last detail is the reason for the failure.

I ran into the same problem, but I found a simple way to fix it. It appears to be spawn() errors if the program has been added to the PATH by the user (e.g. normal system commands work).

To fix this, you can use the which module (npm install --save which):

Use require('child_process').exec instead of spawn for a more specific error message!

I was also going through this annoying problem while running my test cases, so I tried many ways to get across it. But the way works for me is to run your test runner from the directory which contains your main file which includes your nodejs spawn function something like this:

For example, this file name is test.js, so just move to the folder which contains it. In my case, it is test folder like this:

then from run your test runner in my case its mocha so it will be like this:

I have wasted my more than one day to figure it out. Enjoy!!

solution in my case

I ran into this problem on Windows, where calling exec and spawn with the exact same command (omitting arguments) worked fine for exec (so I knew my command was on $PATH), but spawn would give ENOENT. Turned out that I just needed to append .exe to the command I was using:

A case that I found that is not in this list but it's worthy to be added:

On Alpine Linux, Node will error with ENOENT if the executable is not compatible.

Alpine expects binaries with libc. An executable (e.g. chrome as part of chromium) that has been compiled with glibc as a wrapper for system calls, will fail with ENOENT when called by spawn.

I was getting this error when trying to debug a node.js program from within VS Code editor on a Debian Linux system. I noticed the same thing worked OK on Windows. The solutions previously given here weren't much help because I hadn't written any "spawn" commands. The offending code was presumably written by Microsoft and hidden under the hood of the VS Code program.

Next I noticed that node.js is called node on Windows but on Debian (and presumably on Debian-based systems such as Ubuntu) it's called nodejs. So I created an alias - from a root terminal, I ran

and this solved the problem. The same or a similar procedure will presumably work in other cases where your node.js is called nodejs but you're running a program which expects it to be called node, or vice-versa.

If you're on Windows Node.js does some funny business when handling quotes that may result in you issuing a command that you know works from the console, but does not when run in Node. For example the following should work:

but fails. There's a fantastically undocumented option windowsVerbatimArguments for handling quotes/similar that seems to do the trick, just be sure to add the following to your opts object:

and your command should be back in business.

Although it may be an environment path or another issue for some people, I had just installed the Latex Workshop extension for Visual Studio Code on Windows 10 and saw this error when attempting to build/preview the PDF. Running VS Code as Administrator solved the problem for me.

It was due to having a wrong configuration in .env file for BROWSER. I had BROWSER=null, but it has to be BROWSER=none. Changing that configuration resolved my issue.

Tried all nothing worked , my system has different issue .

I got the same error for windows 8.The issue is because of an environment variable of your system path is missing . Add "C:\Windows\System32\" value to your system PATH variable.

Make sure to have the package installed locally. By changing the spawn command with exec i got a more detailed error and found out I didn't install the package. Simply run, to check if the package is present: 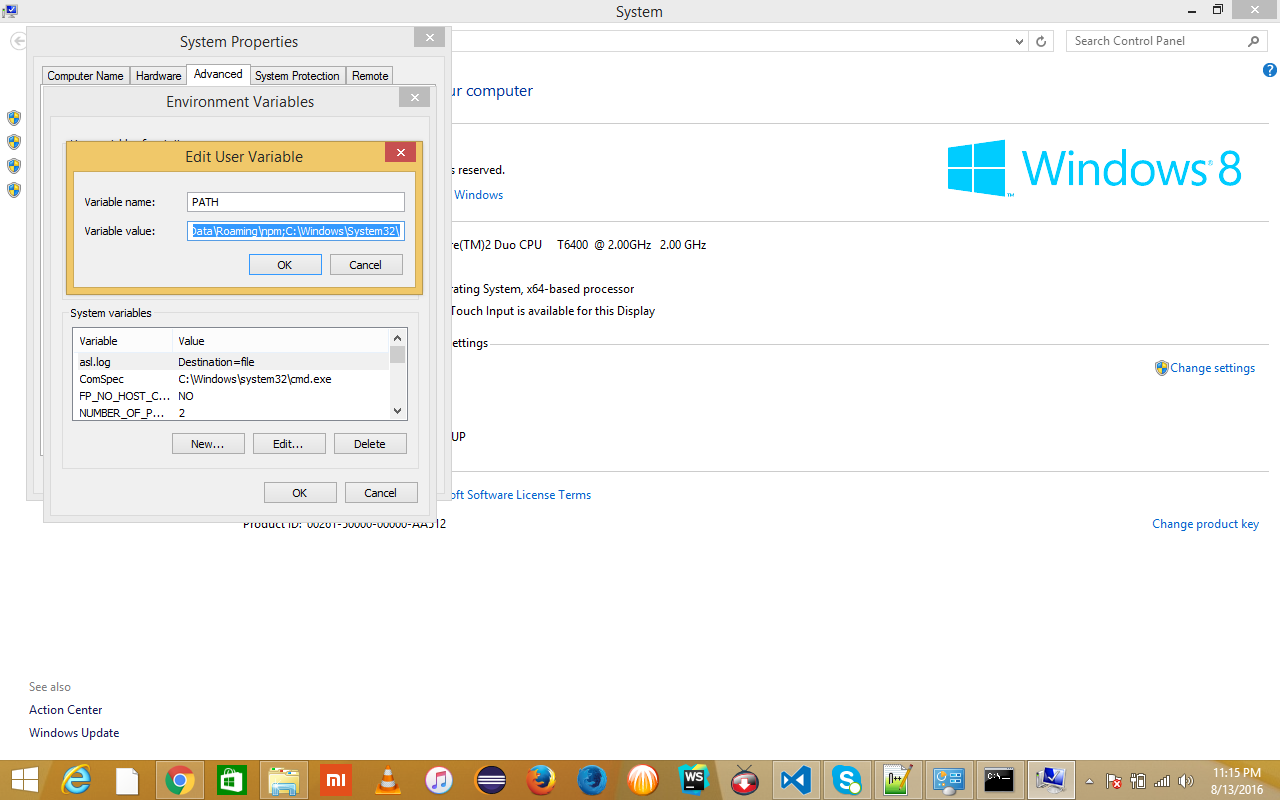 Not the answer you're looking for? Browse other questions tagged node.js debugging error-handling child-process spawn or ask your own question.

1678
How do I debug Node.js applications?
1942
Writing to files in Node.js
2804
How do I pass command line arguments to a Node.js program?
2192
How to decide when to use Node.js?
2144
How to exit in Node.js
1
new to coffeescript, getting spawn ENOENT error when running cakefile
1013
Node.js/Windows error: ENOENT, stat 'C:\Users\RT\AppData\Roaming\npm'
0
youtube-dl nodejs has issues Error: spawn EACCES
0
Spawn Rscript ENOENT error while running R script in NodeJS