I have not had much success finding how to style Google's new recaptcha (v2). The eventual goal is to make it responsive, but I am having difficulty applying styling for even simple things like width.

Their API documentation does not appear to give any specifics on how to control styling at all other than the theme parameter, and simple CSS & JavaScript solutions haven't worked for me.

Basically, I need to be able to apply CSS to Google's new version of reCaptcha. Using JavaScript with it is acceptable.

Sorry to be the answerer of bad news, but after research and debugging, it's pretty clear that there is no way to customize the styling of the new reCAPTCHA controls. The controls are wrapped in an iframe, which prevents the use of CSS to style them, and Same-Origin Policy prevents JavaScript from accessing the contents, ruling out even a hacky solution.

Why No Customize API?:

Unlike reCAPTCHA API Version 1.0, there are no customize options in API Version 2.0. If we consider how this new API works, it's no surprise why.

Excerpt from Are you a robot? Introducing “No CAPTCHA reCAPTCHA”:

While the new reCAPTCHA API may sound simple, there is a high degree of sophistication behind that modest checkbox. CAPTCHAs have long relied on the inability of robots to solve distorted text. However, our research recently showed that today’s Artificial Intelligence technology can solve even the most difficult variant of distorted text at 99.8% accuracy. Thus distorted text, on its own, is no longer a dependable test.

To counter this, last year we developed an Advanced Risk Analysis backend for reCAPTCHA that actively considers a user’s entire engagement with the CAPTCHA—before, during, and after—to determine whether that user is a human. This enables us to rely less on typing distorted text and, in turn, offer a better experience for users. We talked about this in our Valentine’s Day post earlier this year.

If you were able to directly manipulate the styling of the control elements, you could easily interfere with the user-profiling logic that makes the new reCAPTCHA possible.

What About a Custom Theme?:

Now the new API does offer a theme option, by which you can choose a preset theme such as light and dark. However there is not presently a way to create a custom theme. If we inspect the iframe, we will find the theme name is passed in the query string of the src attribute. This URL looks something like the following.

This parameter determines what CSS class name is used on the wrapper element in the iframe and determines the preset theme to use.

Digging through the minified source, I found that there are actually 4 valid theme values, which is more than the 2 listed in the documentation, but default and standard are the same as light.

We can see the code that selects the class name from this object here.

There is no code for a custom theme, and if any other theme value is specified, it will use the standard theme.

At present, there is no way to fully style the new reCAPTCHA elements, only the wrapper elements around the iframe can be stylized. This was almost-certainly done intentionally, to prevent users from breaking the user profiling logic that makes the new captcha-free checkbox possible. It is possible that Google could implement a limited custom theme API, perhaps allowing you to choose custom colors for existing elements, but I would not expect Google to implement full CSS styling.

As guys mentioned above, there is no way ATM. but still if anyone interested, then by adding in just two lines you can at least make it look reasonable, if it break on any screen. you can assign different value in @media query.

Hope this helps anyone :-).

Unfortunately we cant style reCaptcha v2, but it is possible to make it look better, here is the code:

I use below trick to make it responsive and remove borders. this tricks maybe hide recaptcha message/error.

This style is for rtl lang but you can change it easy. 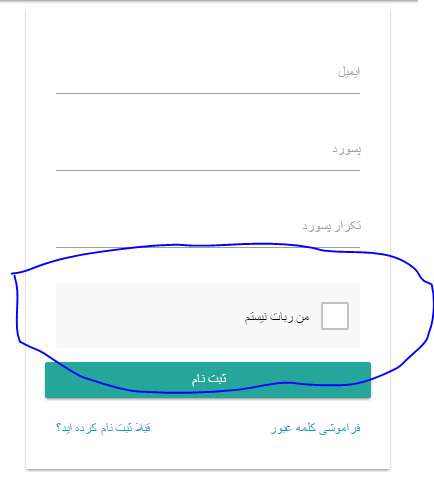 Add a data-size property to the google recaptcha element and make it equal to "compact" in case of mobile.

What you can do is to hide the ReCaptcha Control behind a div. Then make your styling on this div. And set the css "pointer-events: none" on it, so you can click through the div (Click through a DIV to underlying elements).

The checkbox should be in a place where the user is clicking.

You can recreate recaptcha , wrap it in a container and only let the checkbox visible. My main problem was that I couldn't take the full width so now it expands to the container width. The only problem is the expiration you can see a flick but as soon it happens I reset it.

Great! Now here is styling available for reCaptcha.. I just use inline styling like:

whatever you wanna to do small customize in inline styling...

Hope it will help you!!

Just adding a hack-ish solution to make it responsive.

Wrap the recaptcha in an extra div:

This yields the following:

It will now resize horizontally, and doesn't have a border. The recaptcha logo would get cut off on the right, so I am hiding it with a border-right. It's also hiding the privacy and terms links, so you may want to add those back in.

I attempted to set a height on the wrapper element, and then vertically center the recaptcha to reduce the height. Unfortunately, any combo of overflow:hidden and a smaller height seems to kill the iframe.

in the V2.0 it's not possible. The iframe blocks all styling out of this. It's difficult to add a custom theme instead of the dark or light one.

With the integration of the invisible reCAPTCHA you can do the following:

To enable the Invisible reCAPTCHA, rather than put the parameters in a div, you can add them directly to an html button.

a. data-callback=””. This works just like the checkbox captcha, but is required for invisible.

b. data-badge: This allows you to reposition the reCAPTCHA badge (i.e. logo and ‘protected by reCAPTCHA’ text) . Valid options as ‘bottomright’ (the default), ‘bottomleft’ or ‘inline’ which will put the badge directly above the button. If you make the badge inline, you can control the CSS of the badge directly.

Late to the party, but maybe my solution will help somebody.

I haven't found any solution that works on a responsive website when the viewport changes or the layout is fluid.

So I've created a jQuery script for django-cms that is dynamically adapting to a changing viewport. I'm going to update this response as soon as I have the need for a modern variant of it that is more modular and has no jQuery dependency.

I came across this answer trying to style the ReCaptcha v2 for a site that has a light and a dark mode. Played around some more and discovered that besides transform, filter is also applied to iframe elements so ended up using the default/light ReCaptcha and doing this when the user is in dark mode:

The hue-rotate(180deg) makes it so that the logo is still blue and the check-mark is still green when the user clicks it, while keeping white invert()'ed to black and vice versa.

Didn't see this in any answer or comment so decided to share even if this is an old thread.

If someone is still interested, there is a simple javascript library (no jQuery dependency), named custom recaptcha. It lets you customize the button with css and implement some js events (ready/checked). The idea is to make the default recaptcha "invisible" and put a button over it. Just change the id of the recaptcha and that's it.

I am just adding this kind of solution / quick fix so it won't get lost in case of a broken link.

Link to this solution "Want to add link How to resize the Google noCAPTCHA reCAPTCHA | The Geek Goddess" was provided by Vikram Singh Saini and simply outlines that you could use inline CSS to enforce framing of the iframe.

You can use some CSS for Google reCAPTCHA v2 styling on your website:

– Resize the Google reCAPTCHA v2 widget by using this snippet:

All elements, property of CSS above that’s just for your reference. You can change them by yourself (only using CSS class selector).

You can also find out Google reCAPTCHA v3's styling there.

You can also choose between a dark or light ReCaptcha theme. I used this in one of my Angular 8 Apps

A bit late but I tried this and it worked to make the Recaptcha responsive on screens smaller than 460px width. You can't use css selector to select elements inside the iframe. So, better use the outermost parent element which is the class g-recaptcha to basically zoom-out i.e transform the size of the entire container. Here's my code which worked:

if you use scss, that worked for me:

Not the answer you're looking for? Browse other questions tagged javascript css captcha recaptcha or ask your own question.

1456
How do I style a <select> dropdown with only CSS?
911
How can I remove a style added with .css() function?
917
How to style a checkbox using CSS
2939
Is it possible to apply CSS to half of a character?
310
How does Google reCAPTCHA v2 work behind the scenes?
2
Override Google's new reCaptcha to make it responsive
0
Recaptcha 1.0 vs 2.0 in C#
0
google recaptcha to send email