I have this simple binary correlation method, It beats table lookup and Hakmem bit twiddling methods by x3-4 and %25 better than GCC's __builtin_popcount (which I think maps to a popcnt instruction when SSE4 is enabled.)

Here is the much simplified code:

I tried unrolling the loop, but I think GCC already automatically does this, so I ended up with same performance. Do you think performance further improved without making the code too complicated? Assume v1 and v2 are of the same size and size is even.

I am happy with its current performance but I was just curious to see if it could be further improved.

Edit: Fixed an error in union and it turned out this error was making this version faster than builtin __builtin_popcount , anyway I modified the code again, it is again slightly faster than builtin now (15%) but I don't think it is worth investing worth time on this. Thanks for all comments and suggestions.

Second Edit: turned out that builtin is the fastest, sigh. especially with -funroll-loops and -fprefetch-loop-arrays args. Something like this:

This is an interesting SSE3 parallel 4 bit lookup algorithm. Idea is from Wojciech Muła, implementation is from Marat Dukhan's answer. Thanks to @Apriori for reminding me this algorithm. Below is the heart of the algorithm, it is very clever, basically counts bits for bytes using a SSE register as a 16 way lookup table and lower nibbles as index of which table cells are selected. Then sums the counts.

On my tests this version is on par; slightly faster on smaller input, slightly slower on larger ones than using hw popcount. I think this should really shine if it is implemented in AVX. But I don't have time for this, if anyone is up to it would love to hear their results.

This runs at approx. 2.36 clocks per loop on small data sets (fits in cache). I think it run's slow because of the 'long' dependency chain on sum which restricts the CPU's ability to handle more things out of order. We can improve it by manually pipelining the loop:

How about four-way pipelining? That's 1.65 clocks per item. What about 8-way? 1.57 clocks per item. We can derive that the runtime per item is (1.5n + 0.5) / n where n is the amount of pipelines in our loop. I should note that for some reason 8-way pipelining performs worse than the others when the dataset grows, i have no idea why. The generated code looks okay.

Now if you look carefully there is one xor, one add, one popcnt, and one mov instruction per item. There is also one lea instruction per loop (and one branch and decrement, which i'm ignoring because they're pretty much free).

You can check with Agner Fog's optimization manual that an lea is half a clock cycle in throughout and the mov/xor/popcnt/add combo is apparently 1.5 clock cycles, although i don't fully understand why exactly.

I don't have an AVX2 cpu at hand (xor on 256-bit vector registers is an AVX2 feature), but my vectorized-load implementation performs quite poorly with low data sizes and reached an minimum of 1.97 clock cycles per item.

For reference these are my benchmarks: 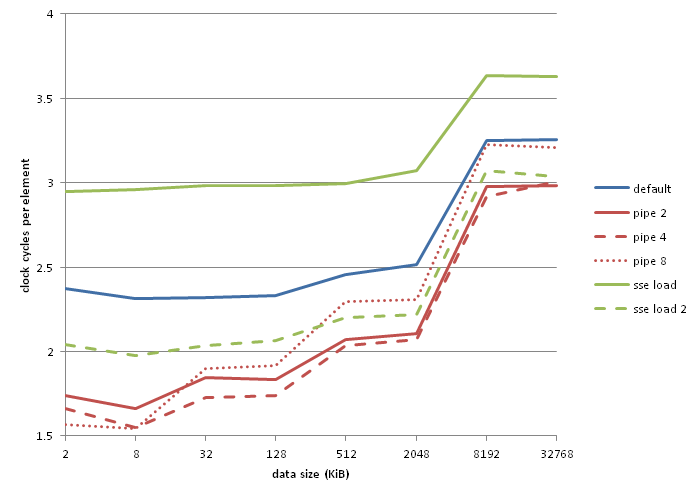 "pipe 2", "pipe 4" and "pipe 8" are 2, 4 and 8-way pipelined versions of the code shown above. The poor showing of "sse load" appears to be a manifestation of the lzcnt/tzcnt/popcnt false dependency bug which gcc avoided by using the same register for input and output. "sse load 2" follows below:

Have a look here. There is an SSSE3 version that beats the popcnt instruction by a lot. I'm not sure but you may be able to extend it to AVX as well.

Not the answer you're looking for? Browse other questions tagged performance optimization x86 bit-manipulation sse or ask your own question.

4269
Which "href" value should I use for JavaScript links, "#" or "javascript:void(0)"?
1544
Fastest way to determine if an integer's square root is an integer
109
Why is SSE scalar sqrt(x) slower than rsqrt(x) * x?
410
Fastest sort of fixed length 6 int array
267
How to write a large buffer into a binary file in C++, fast?
2
SSE operator+= for vectors
1528
Replacing a 32-bit loop counter with 64-bit introduces crazy performance deviations with _mm_popcnt_u64 on Intel CPUs
21
AVX 256-bit code performing slightly worse than equivalent 128-bit SSSE3 code
336
Deoptimizing a program for the pipeline in Intel Sandybridge-family CPUs
882
Why does C++ code for testing the Collatz conjecture run faster than hand-written assembly?