Is declaration of variables expensive?

While coding in C, I came across the below situation.

Considering the if statement in the above code can return from the function, I can declare the variables in two places.

As a programmer, I would think to keep the variable declaration after if Statement.

Does the declaration place cost something? Or is there some other reason to prefer one way over the other?

In C99 and later (or with the common conforming extension to C89), you are free to mix statements and declarations.

Just as in earlier versions (only more so as compilers got smarter and more aggressive), the compiler decides how to allocate registers and stack, or do any number of other optimizations conforming to the as-if-rule.
That means performance-wise, there's no expectation of any difference.

Anyway, that was not the reason such was allowed:

It was for restricting scope, and thus reducing the context a human must keep in mind when interpreting and verifying your code.

Do whatever makes sense, but current coding style recommends putting variable declarations as close to their usage as possible

In reality, variable declarations are free on virtually every compiler after the first one. This is because virtually all processors manage their stack with a stack pointer (and possibly a frame pointer). For example, consider two functions:

If I were to compile these on a modern compiler (and tell it not to be smart and optimize out my unused local variables), I'd see this (x64 assembly example.. others are similar):

Note: both functions have the same number of opcodes!

This is because virtually all compilers will allocate all of the space they need up front (barring fancy things like alloca which are handled separately). In fact, on x64, it is mandatory that they do so in this efficient manner.

(Edit: As Forss pointed out, the compiler may optimize some of the local variables into registers. More technically, I should be arguing that the first varaible to "spill over" into the stack costs 2 opcodes, and the rest are free)

For the same reasons, compilers will collect all of the local variable declarations, and allocate space for them right up front. C89 requires all declarations to be up-front because it was designed to be a 1 pass compiler. For the C89 compiler to know how much space to allocate, it needed to know all of the variables before emitting the rest of the code. In modern languages, like C99 and C++, compilers are expected to be much smarter than they were back in 1972, so this restriction is relaxed for developer convenience.

This has nothing to do with compilers (which obviously could not care one way or another). It has been found that most human programmers read code better if the variables are put close to where they are used. This is just a style guide, so feel free to disagree with it, but there is a remarkable consensus amongst developers that this is the "right way."

Now for a few corner cases:

In C, I believe all variable declarations are applied as if they were at the top of the function declaration; if you declare them in a block, I think it's just a scoping thing (I don't think it's the same in C++). The compiler will perform all optimizations on the variables, and some may even effectively disappear in the machine code in higher optimizations. The compiler will then decide how much space is needed by the variables, and then later, during execution, create a space known as the stack where the variables live.

When a function is called, all of the variables that are used by your function are put on the stack, along with information about the function that is called (i.e. the return address, parameters, etc.). It doesn't matter where the variable was declared, just that it was declared - and it will be allocated onto the stack, regardless.

Declaring variables isn't "expensive," per se; if it's easy enough to be not used as a variable, the compiler will probably remove it as a variable. 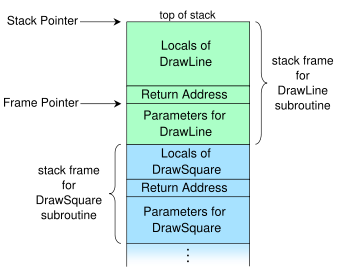 Wikipedia on call stacks, Some other place on the stack

Of course, all of this is implementation-dependent and system-dependent.

Yes, it can cost clarity. If there is a case where the function must do nothing at all on some condition, (as when finding the global false, in your case), then placing the check at the top, where you show it above, is surely easier to understand - something that is essential while debugging and/or documenting.

It ultimately depends on the compiler but usually all locals are allocated at the beginning of the function.

However, the cost of allocating local variables is very small as they are put on the stack (or are put in a register after optimization).

The best practice is to adapt a lazy approach, i.e., declare them only when you really need them ;) (and not before). It results in the following benefit:

Code is more readable if those variables are declared as near to the place of usage as possible.

Keep the declaration as close to where it's used as possible. Ideally inside nested blocks. So in this case it would make no sense to declare the variables above the if statement.

If you have this

then the stack space reserved for foo and somecondition can be obviously reused for str1etc., so by declaring after the if, you may save stack space. Depending on the optimization capabilities of the compiler, the saving of stack space may also take place if you flatten the fucntion by removing the inner pair of braces or if you do declare str1 etc. before the if; however, this requires the compiler/optimizer to notice that the scopes do not "really" overlap. By positining the declarations after the if you facilitate this behaviour even without optimization - not to mention the improved code readability.

Whenever you allocate local variables in a C scope (such as a functions), they have no default initialization code (such as C++ constructors). And since they're not dynamically allocated (they're just uninitialized pointers), no additional (and potentially expensive) functions need to be invoked (e.g. malloc) in order to prepare/allocate them.

Due to the way the stack works, allocating a stack variable simply means decrementing the stack pointer (i.e. increasing the stack size, because on most architectures, it grows downwards) in order to make room for it. From the CPU's perspective, this means executing a simple SUB instruction: SUB rsp, 4 (in case your variable is 4 bytes large--such as a regular 32-bit integer).

Moreover, when you declare multiple variables, your compiler is smart enough to actually group them together into one large SUB rsp, XX instruction, where XX is the total size of a scope's local variables. In theory. In practice, something a little different happens.

In situations like these, I find GCC explorer to be an invaluable tool when it comes to finding out (with tremendous ease) what happens "under the hood" of the compiler.

So let's take a look at what happens when you actually write a function like this: GCC explorer link.

As it turns out, GCC is even smarter than that. It doesn't even perform the SUB instruction at all to allocate the local variables. It just (internally) assumes that the space is "occupied", but doesn't add any instructions to update the stack pointer (e.g. SUB rsp, XX). This means that the stack pointer is not kept up to date but, since in this case no more PUSH instructions are performed (and no rsp-relative lookups) after the stack space is used, there's no issue.

Here's an example where no additional variables are declared: http://goo.gl/3TV4hE

If you take a look at the code before the premature return (jmp .L3, which jumps to the cleanup and return code), no additional instructions are invoked to "prepare" the stack variables. The only difference is that the function parameters a and b, which are stored in the edi and esi registers, are loaded onto the stack at a higher address than in the first example ([rbp-4] and [rbp - 8]). This is because no additional space has been "allocated" for the local variables like in the first example. So, as you can see, the only "overhead" for adding those local variables is a change in a subtraction term (i.e. not even adding an additional subtraction operation).

So, in your case, there is virtually no cost for simply declaring stack variables.

I prefer keeping the "early out" condition at the top of the function, in addition to documenting why we are doing it. If we put it after a bunch of variable declarations, someone not familiar with the code could easily miss it, unless they know they have to look for it.

If it actually mattered the only way to avoid allocating the variables is likely to be:

But in practice I think you'll find no performance benefit. If anything a minuscule overhead.

Of course if you were coding C++ and some of those local variables had non-trivial constructors you would probably need to place them after the check. But even then I don't think it would help to split the function.

If you declare variables after if statement and returned from the function immediately the compiler does not commitment memory in the stack.

Not the answer you're looking for? Browse other questions tagged c or ask your own question.

612
What REALLY happens when you don't free after malloc before program termination?
978
What is the difference between a definition and a declaration?
1159
How do I use extern to share variables between source files?
86
Where you can and cannot declare new variables in C?
4
C string declaration
3
Declaration of function pointers
141
How to explain C pointers (declaration vs. unary operators) to a beginner?
5
Implicit declaration in C language