What is a deadlock in a database?

What is a deadlock in SQL Server and when it arises?

What are the issues with deadlock and how to resolve it?

In general, deadlock means that two or more entities are blocking some sources, and none of them is able to finish, because they are blocking sources in a cyclic way.

One example: Let's say I have table A and table B, I need to do some update in A and then B and I decide to lock both of them at the moment of usage (this is really stupid behaviour, but it serves it's purpose now). At the same moment, someone else does the same thing in opposite order - locks B first, then locks A.

proc1: Lock B - starts waiting until proc2 releases B

proc2: Lock A - starts waiting until proc1 releases A

Neither of them will ever finish. That's a deadlock. In practice this usually results in timeout errors since it is not desired to have any query hanging forever, and the underlying system (e.g. the database) will kill queries that don't finish in time.

What is a deadlock

A deadlock happens when two concurrent transactions cannot make progress because each one waits for the other to release a lock, as illustrated in the following diagram. 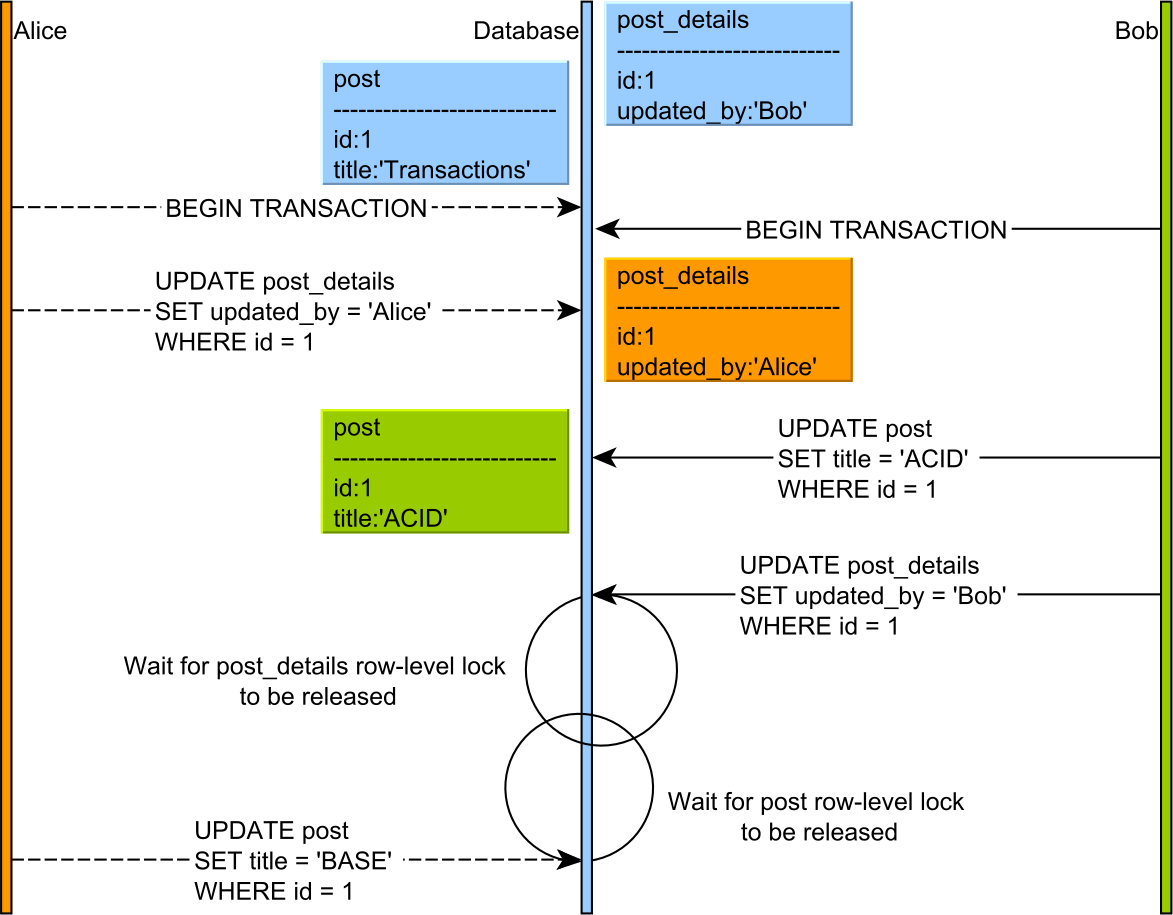 Because both transactions are in the lock acquisition phase, neither one releases a lock prior to acquiring the next one.

Recovering from a deadlock situation

If you're using a Concurrency Control algorithm that relies on locks, then there is always the risk of running in a deadlock situation. Deadlocks can occur in any concurrency environment, not just in a database system.

For instance, a multithreading program can deadlock if two or more threads are waiting on locks that were previously acquired so that no thread can make any progress. If this happens in a Java application, the JVM cannot just force a Thread to stop its execution and release its locks.

Even if the Thread class exposes a stop method, that method has been deprecated since Java 1.1 because it can cause objects to be left in an inconsistent state after a thread is stopped. Instead, Java defines an interrupt method, which acts as a hint as a thread that gets interrupted can simply ignore the interruption and continue its execution.

For this reason, a Java application cannot recover from a deadlock situation, and it is the responsibility of the application developer to order the lock acquisition requests in such a way that deadlocks can never occur.

However, a database system cannot enforce a given lock acquisition order since it's impossible to foresee what other locks a certain transaction will want to acquire further. Preserving the lock order becomes the responsibility of the data access layer, and the database can only assist in recovering from a deadlock situation.

The database engine runs a separate process that scans the current conflict graph for lock-wait cycles (which are caused by deadlocks). When a cycle is detected, the database engine picks one transaction and aborts it, causing its locks to be released, so that the other transaction can make progress.

Unlike the JVM, a database transaction is designed as an atomic unit of work. Hence, a rollback leaves the database in a consistent state.

While the database chooses to rollback one of the two transactions being stuck, it's not always possible to predict which one will be rolled back. As a rule of thumb, the database might choose to roll back the transaction with a lower rollback cost.

According to the Oracle documentation, the transaction that detected the deadlock is the one whose statement will be rolled back.

SQL Server allows you to control which transaction is more likely to be rolled back during a deadlock situation via the DEADLOCK_PRIORITY session variable.

As explained in the documentation, PostgreSQL does not guarantee which transaction is to be rolled back.

MySQL tries to roll back the transaction that modified the least number of records, as releasing fewer locks is less costly.

Deadlock is what happens when two people need multiple resources to execute, and where some of the resources are locked by each of the people. This leads to the fact that A can't execute without something B has and vice versa.

Lets say I have Person A and Person B. They both need to get two rows to run (Row1 and Row2).

One reasonably simple way to reduce deadlock is in all your complex transactions, you should do operations in the same order. In other words, access Table1 then Table2 in the same order. This will help reduce the number of deadlocks that occur.

An impasse that may result when two (or more) transactions are each waiting for locks to be released that are held by the other.

PeterPeter
1
New contributor
Peter is a new contributor to this site. Take care in asking for clarification, commenting, and answering. Check out our Code of Conduct.
Add a comment  |

Not the answer you're looking for? Browse other questions tagged database sql-server-2005 deadlock database-deadlocks or ask your own question.

2
Race conditions with Apache, MySQL and PHP
0
How do I atomically replace a set of rows?
0
SQL deadlock when running select query

1630
Insert into ... values ( SELECT ... FROM ... )
4978
What is the difference between "INNER JOIN" and "OUTER JOIN"?
1283
How can I list the tables in a SQLite database file that was opened with ATTACH?
3013
Add a column with a default value to an existing table in SQL Server
1280
Check if table exists in SQL Server
1700
Insert results of a stored procedure into a temporary table
1460
How can I do an UPDATE statement with JOIN in SQL Server?
1444
What are the options for storing hierarchical data in a relational database?
350
What's the difference between deadlock and livelock?